Where to find hot, steamy dumplings in Johannesburg 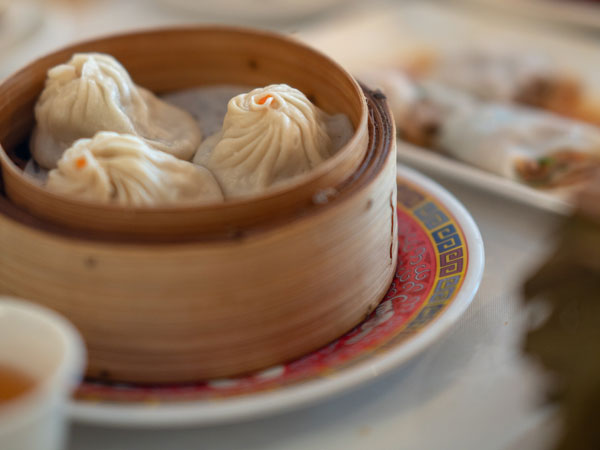 Looking for the best places to get steamy hot dumplings in Jozi? Look no further! This list is the perfect place to start.

The average dish here costs just R145 per person at this popular Asian cuisine eatery and the portion sizes are generous, too. Try the four-piece vegan, beef or pork mandoo (traditional Korean dumplings) that you can order either deep-fried or steamed. The vegan mandoo is made with spinach, filled with tofu, jelly-like glass noodles (sweet potato starch) and assorted vegetables at just R75, while the meat options are just R5 more.

Inside 27 Boxes, you’ll find an unassuming, charming little Chinese restaurant that puts paid to the belief that bigger is better. Here, less is more with a short-and-sweet menu that makes the Cantonese cuisine novice feel less overwhelmed by too many options. The three-piece dim sum, all under R80, are made following traditional Chinese recipes. The large, thick-skinned dumplings are steamed or fried and filled with pork and garlic chives, or seasonal vegetables. The rice flour har gau are filled with prawns and steamed to a soft, translucent consistency. A specials board outside also makes choosing what to eat easier. One day it might be prawn potstickers with veggies, or chicken and pork dim sum magic bags on another.

Popular for their torched sushi, this restaurant chain also makes showstopping dim sum served in starter portions. There is a Fireroom in Zimbali, Monte Casino, Bedfordview, Pretoria and Midrand. At the Mall of Africa Fireroom, try the steamy hot and translucent creamy spinach-and-cream cheese gao, served in a bamboo steamer (R62). Or, if you’re feeling for something more meaty, go for the three-piece Hong Kong potato dumplings filled with prawn and chicken (R84).

A lunch-time massage followed by hearty dumplings, all as part of a lunch package? That’s that kind of fusion you can expect for less than R500 per person at the Rabie Road restaurant and spa in Randburg which prides itself on true fusion cuisine. You can expect flavours from Cambodia, Vietnam, Laos, Japan, China, Malaysia, Thailand, Singapore and the Philippines. If you’re a dumpling fan, try the deep-fried beef or pork belly wonton served with a peanut sauce and sweet chilli with colourful slaw. The double-decker dim sum is served in four portions on ranges from R52.90 to R80.90 with fillings such as chicken prawn, pork, beef, duck and seasonal vegetables. A platter for two is R206.90, while a platter for one costs R106.90.

Love Me So Japanese Bar (Melville)

This one’s for the tapas lovers who enjoy their sharing plates overflowing with bao, dim sum and grilled meat skewers. This Asian food bar serves twice-cooked gyoza with soya dim sum dipping sauce, cabbage and home-made pickles. Fillings include wild mushrooms (R64), slow-cooked roast pork neck (R66) or chicken (R66). Also look out for their Eat as Much Tapas events for R175 per person, as well as their Korean-styled street braise with shortrib, beef steak, chicken yakitori and pork belly – all barbecued in mouth-watering Korean flavours.

Each Momo restaurant has its own specialities, and the Keyes Art Mile location’s appears to be dim sum. The second youngest eatery in the contemporary Asian fusion family serves their pot stickers crispy. The kimchi and tofu-filled dumplings cost R65 for five pieces, while the beef and pickled shiitake pot-stickers are R68. Don’t leave without trying the bochoi har gau – four delicious chewy spinach-and-prawn dumplings in crystal wrappers for R68.

Sichuan and Cantonese dishes, ranging from fish, chicken and duck to beef, pork, seafood, and vegetables, are the order of the day at this vibrant restaurant in Carnival City. The dim sum menu is extensive with hearty steamed fun guo or Chaozhou dumplings, deep-fried taro dumplings, traditional fried pork or prawn dumplings and, for the sweet-toothed, roast char siu buns, as well as custard buns. Not in the mood for small dishes? Set menus range from R278 to R298 per person.

Start off with a perfectly crisp pot-sticker, known traditionally as a gyoza. The portion of four is fried and steamed and, for less than R100, filled with the ingredients of your choice – the spicy chicken or vegan mushroom pot-stickers come highly recommended. Next, try the pork and shrimp sui mai, boa via, or signature goa dim sum – fine, gossamer-thin rice pastry filled with your choice of prawn and celery, spinach and cream cheese, prawn, butternut, crab, or cream cheese and salmon. The average dim sum meal here costs R180 per person.

Considered one of Johannesburg’s best seafood restaurants, this eatery on the busy corner of Oxford Road and Corlett Drive is as famous for its seafood-and-bubbly pairings as it is for its sushi and dumplings. Dim sum prices start at R80. Each option is served as three pieces, so it’s a good idea to order at least three variations if you’re hungry. Try their spinach-and-cream cheese dim sum (R80), prawn-and-chicken pot-stickers (R110), and beef-and-ginger dim sum (R85). A three-course meal for two could set you back about R1 000 – but every cent is worth it.