Coming as it does from some of the people behind two of Cape Town’s most hip restaurants – El Burro and Royale – Junior has rather a lot to live up to. But the burger spot just off Kloof Nek is quick to separate itself from its parent, Royale – these burgers, co-owner Hugo Berolsky explains, are decidedly not gourmet. Katharine Jacobs elbowed her way through the hipsters to find out what exactly they are. 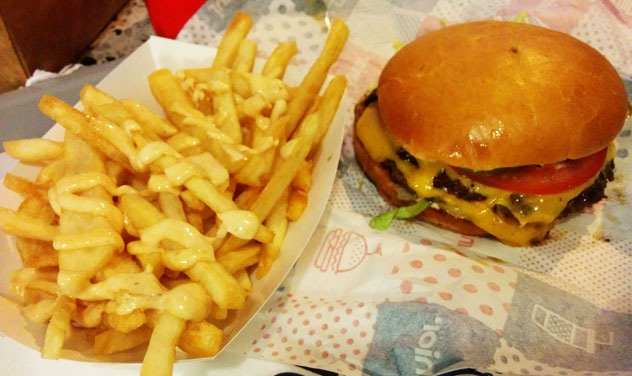 A double burger with fries with Junior sauce

There’s something thoroughly satisfying about a squishy white roll. These rolls give way in the same soft, pillowy manner that a McDonalds roll does – except they look more like the golden bun in the adverts and less like an actual McDonalds burger. The meat patties are also thin like a takeaway burger – even the double burger, with two patties and two slices of melting cheese, is a rather flat affair. There’s a crunchy piece of pickle, tomato, onion, lettuce and the ooze of the in-house tomato sauce. It’s a yummy thing; in many respects, very like a fast food burger – but with one crucial difference: as Hugo had assured me previously, they’re not packed with salt, sugar and preservatives.

This is admirable, but I’m ever so slightly disappointed. My brain is not blissed out in the way it would be, had I just eaten an ordinary takeaway burger. And yet, I haven’t exactly been eating salad. I’m not sure how many brownie points to award myself in this situation, and it’s puzzling. 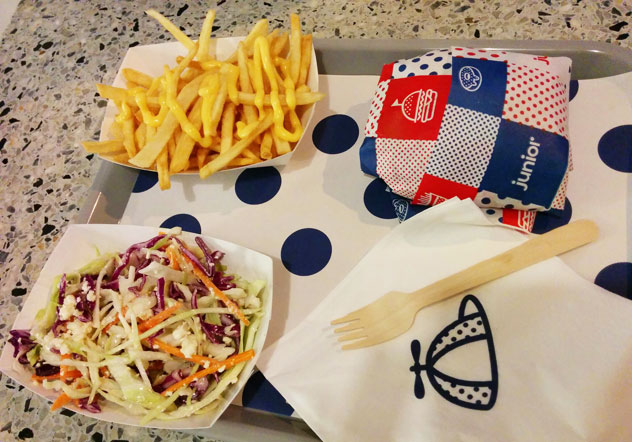 The chips get a thumbs up. They’re thin and golden, but they’re cut on site and taste like potatoes (something often missing in fast-food chips, I find.) The cheese fries are tasty – but for those used to British ‘cheesy chips’, let me manage your expectations: these are the American-style chips made with cheese sauce – not a mess of actual melted cheese.

There’s also coleslaw – happily not drowning in mayo, but enriched with a creamy crumble of feta cheese instead.

For dessert, we sample a baked Oreo doughnut and an ordinary fried doughnut. They’re okay, but they don’t pass my ‘delicious enough’ test, which requires that unhealthy foods be above a certain threshold of deliciousness in order to warrant the kilojoule consumption.

The chocolate and peanut butter milkshake does, however, pass the aforementioned test. It’s not particularly chocolatey, but it’s very peanut buttery, and the thick ice-cream base conceals little clumps of peanut butter that occasionally make it up the straw and deliver a hit of salty, peanut-buttery goodness. There’s also Citizen’s Patriot Light Lager, a new release from the craft brewery – a good option if you didn’t read what I just wrote about the milkshake. 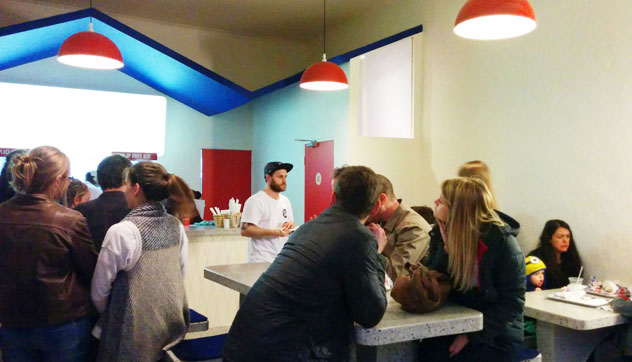 The ‘fast-casual’-concept means you’ll order at the counter, and then take your seat to wait for your order

Primary colours, white walls and fairly bright overhead lighting create something of the atmosphere of a fast-food joint. But a hip logo, cleverly translated onto packaging and signage, signifies that this is not a chain spot. Since tables and chairs are fixed, it’s not the most comfortable venue to linger for hours, but that’s not really the point.

One of the new wave of fast-casual restaurants, this spot doesn’t offer table service. Instead, orders are taken at the counter – and, yes, this means things can get a little cramped on a busy night. After all, in such a vibey location, the majority of diners aren’t taking the burgers away, they’re eating them here. Fortunately, the kitchen is fairly speedy, so the line of loiterers doesn’t get too long.

Have you been to Junior in Tamboerskloof? Let us know what you thought of the experience by writing a review. 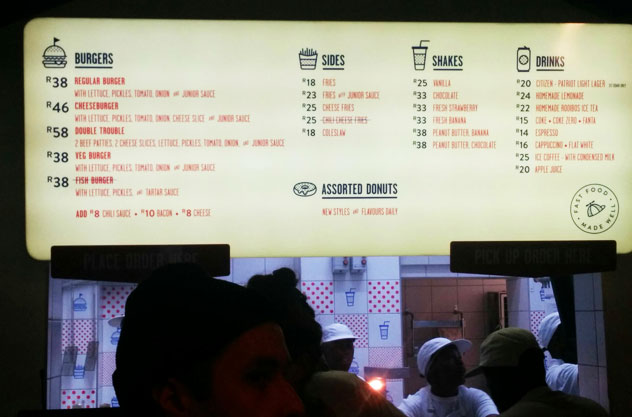