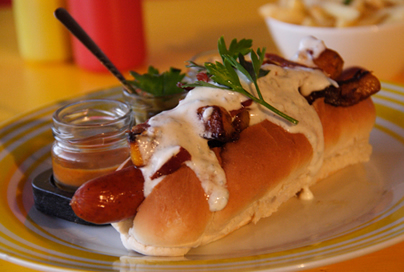 When the hotdog craving strikes, there’s nothing that will satisfy that physical need for salty sausage and sweet sauce on a soft roll. We rounded up our favourite five places to buy gourmet hotdogs in the Mother City.

Owner Luciana Venter sourced a hot dog stand imported from New York and customised it with a canopy and a built-in oven. Yep, that means your authentic pretzel roll is baked right there on the street while your hotdog sizzles on the griddle. Hotdogs cost R35, and you can add the following: All Gold Tomato sauce; chilli mayo (made with Miracle Whip infused with chilli flakes); proper Dijon mustard and that plastic luminous yellow kind that people still seem to love; and Goldcrest gherkins and sauerkraut. They also cater for non-meat eaters, offering Fry’s vegetarian sausages as an alternative. Find the Baguette Bicycle stand between Clarke’s and Birds on Bree Street every First Thursday night; outside House of Machines on Friday nights (when the weather’s good); and at many events around Cape Town. Follow them on Twitter http://twitter.com/BaguetteBicycle. 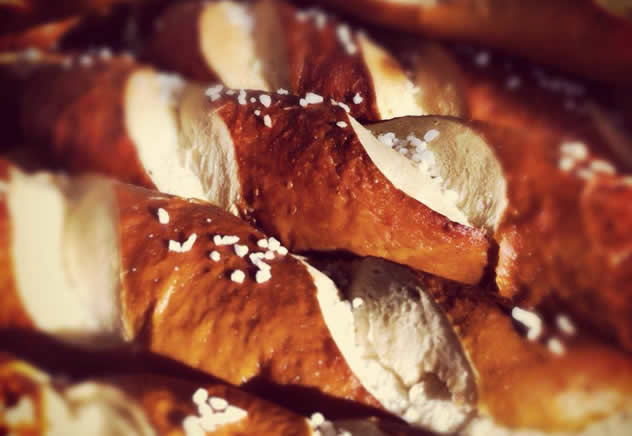 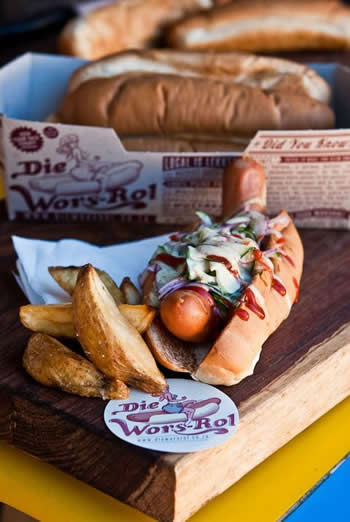 This gourmet hotdog on wheels is the brainchild of Bertus Basson, chef at Top 10 restaurant Overture, judge of Ultimate Braai Master, and all-round great guy. Die Wors-Rol’s travelling trailer sells hotdogs for R45, which come with superb thrice-cooked fries. The super-long sausages (22cms) hail from Sweetwell Farm on the R44 outside Stellenbosch (where piggies roam free) and the mustard is from a Basson family recipe. (Here’s the recipe if you want to make it at home.) Betsie, the brand’s pin-up girl mascot, is now emblazoned on their fully-fledged food truck that will travel to anywhere in the Western Cape.

The trademark hotdog at this 50s-style diner is named after the owner’s canine, The Batman. It comes comes with a bratwurst sausage, camembert cheese, caramelised fig, baby leaves, a drizzle of balsamic glaze and a side order of fries for R66. You could also go for The Chubby Checker, which boasts a Dirk Diggler-sized cheese griller (if Dirk is not familiar to you, be warned that your Google search results may not be safe for work) along with creamy mushroom sauce, mozzarella and peppadews. Also served with fries for R64.

The Power and The Glory

A hub for after-work drinks – or after-school drinks for Michaelis art students – the P&G gets pretty busy at night and finding a seat can be a tough task. You might meet interesting characters here, such as the guy who does full-scale artworks on the newsprint-covered tabletops in ball-point pen, but you’ll be relieved to hear that their hotdogs are straightforwardly tasty: a frankfurter is slipped into a crisp, buttered roll (baked by Euro Haus) and topped with gherkins, tomato sauce and mustard or chilli mayo for R34.

These epic hotdogs are made with emmenthal-filled pork sausages (the manager insists their supplier is local, but confidential) and a toasted hotdog bun made by Jason. Served with the holy trinity of mustard, tomato sauce and mayo, the dog is then topped with bacon sprinkles (as one does) and served with pickles on the side for R40. Wash it down with some Brewers & Union craft beer – and be sure to wipe the foam off your hipster beard afterwards.