Gourmet road trip: Where to eat in McGregor 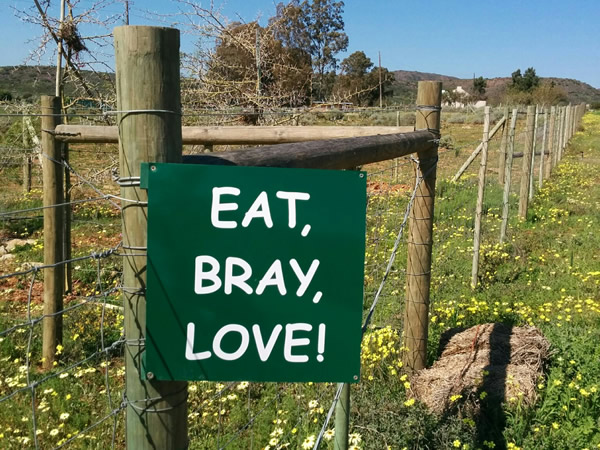 When the village of McGregor was proclaimed in 1862, property buyers believed it would become a buzzing town on a national road. This never happened, and McGregor’s fate was sealed when the road to Greyton via Boesmanskloof was abandoned during World War II. The road from Robertson now peters out a short way outside town, the so-called Road to Nowhere cementing McGregor’s status as sleepy village par excellence. Finding herself in McGregor in the middle of the week, Katharine Jacobs sets about exploring the restaurant options.

For a knock-your-socks-off special meal: Karoux Restaurant
Karoux surprises me despite its reputation for excellence. It’s the kind of gem you stumble upon once or twice a year in a major city – and McGregor is anything but. Aimee van Hecke and Ryan Josten have an impressive combined CV: Aimee previously ran the front-of-house at Catharina’s at Steenberg Hotel, and Ryan headed up the kitchen at The Conservatory at The Cellars-Hohenort and did a stint at Albert Roux’s Chez Roux at Inver Lodge Hotel in Scotland. 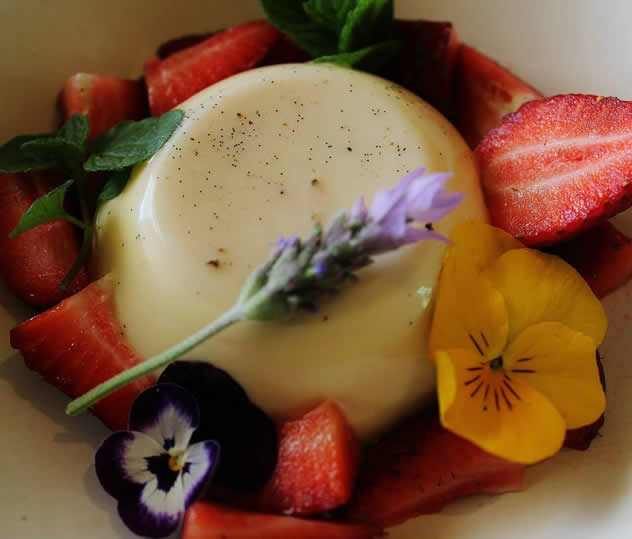 A dessert at Karoux Restaurant.. Photo courtesy of the restaurant.

The bistro-style food really is excellent. The highlight for me is the butter-soft yellowfin tuna tataki. It comes in a ponzu with a wasabi panna cotta and tangy slices of pickled radish. The beetroot risotto with goat’s cheese and watercress is also well executed and the tonka bean crème brûlée exquisite. My only regret is that by dint of dining alone I am unable to order the Gruyère soufflé or the Elgin pear and caramel bread and butter pudding as well. One must suffer through such hardships, sometimes. 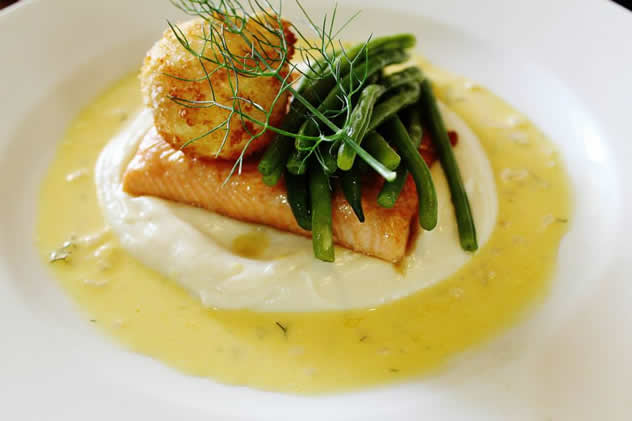 A seafood dish at Karoux Restaurant. Photo courtesy of the restaurant.

For a great view: Lady Grey Restaurant @ Lord’s Guest Lodge
In an effort to atone for all the eating I’m doing, I rent a bicycle and cycle along the dirt road leading out of town to this restaurant and luxury hotel. I find I have to ford a low river and scale a terribly steep driveway, but the view from the restaurant towards the distant mountains is worth the effort. 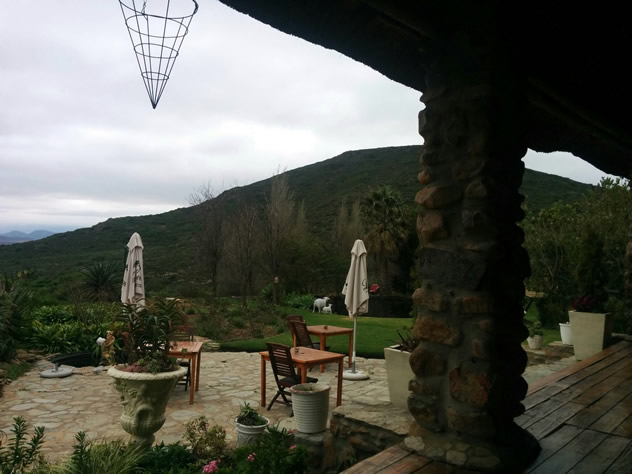 The exterior at the Lady Grey Restaurant @ Lord’s Guest Lodge. Photo courtesy of the restaurant.

The menu spans pizzas and country-style roasts. I sample the avo, blue cheese and fig salad – a very tasty combination – while watching two ducks pad around the garden. My waiter tells me they are the remaining pair from a flock of 20 – the wild caracals in the area have all but annihilated the estate’s domestic duck population. As I leave, a small antelope gambols across the road in front of me. A country paradise, indeed.

For tea and cake (and donkeys): Eseltjiesrus Country Kitchen
“Eat, bray, love” reads the sign at the entrance of Eseltjiesrus donkey sanctuary. I take a tour to meet the donkeys and am allowed to hug the friendlier donkeys, and find a fan in the shape of Thabo, a handsome little donkey who follows me around the paddock. Having brayed and hugged, I embrace the first part of the donkey mantra – and eat. Everything in the sunny little tearoom is prepared on site, and my apple and guava crumble is beautifully crumbly and comforting. It’s also great value, compared with city prices.

For tea, hot chocolate with real chocolate and imported goodies: Deli Girls & Bistro
For brunch, I pick a table on the stoep of this simple restaurant on the main street so I can watch the traffic (three cars in the space of an hour, and a boy and his dog). The farm breakfast is fairly average, but my Earl Grey tea with blue flowers is delicious. Deli Girls has a thoroughly impressive range of imported teas, chocolates, biscuits and tinned food – so if you’re craving a Penguin or finding the McGregor supermarket options a little limited, this is a good place to shop. 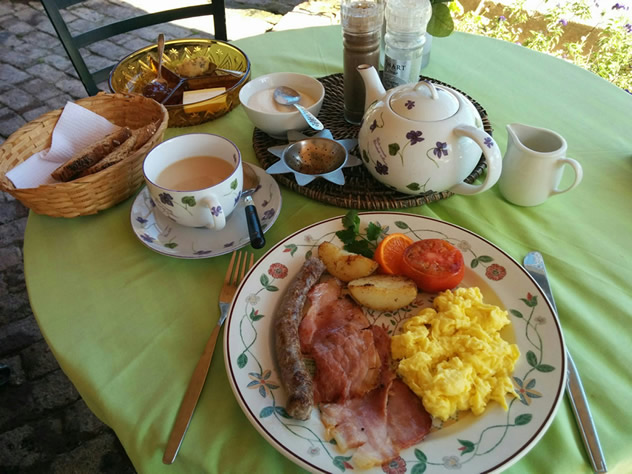 A hearty breakfast at Deli Girls & Bistro. Photo courtesy of the restaurant.

For tea and cake (and second-hand trinkets and books): The Frangipani
The Frangipani offers another lovely stoep overlooking Voortrekker Street… and chocolate cake. I stay strong, however, and order the omelette – which is well made, with just the right amount of cheese, mushrooms and bacon in the filling. 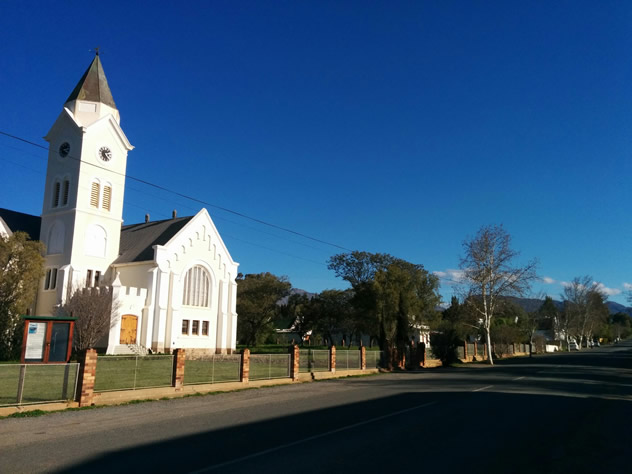 For great olives: Villagers Art Café and Farm Stall
After sampling all the options on offer, I go for the smoked olive tapenade, which is very lightly smoked with real smoke, offsetting the sweet saltiness of the olives. There’s also a restaurant for simple café-style sandwiches or an overwhelmingly meaty Banting breakfast, which includes a chicken fillet, a hamburger patty, bacon, sausage and scrambled egg.

For simple bistro food and opera music: Tebaldi’s Restaurant
I’m slightly disappointed by my chicken curry, which is lacking a kick – perhaps I should’ve ordered one of the pizzas. The aubergine and butternut tian, however, which has a little pesto in its making, is delicious. There’s a cosy atmosphere inside, and the sunny garden out front would make it a great option for lunch. 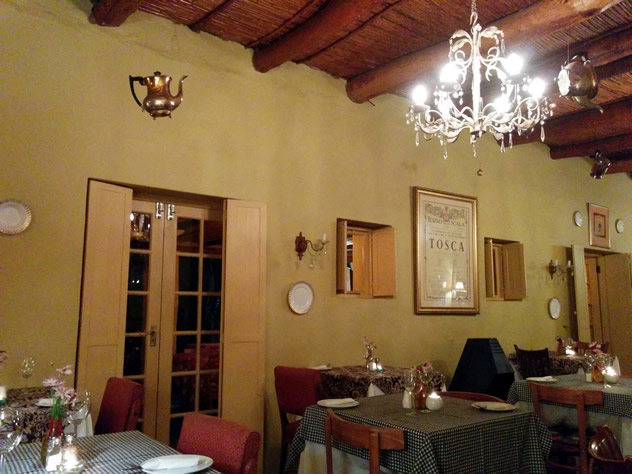 The interior at Tebaldi’s Restaurant. Photo courtesy of the restaurant.

Green Gables
I didn’t make it to Green Gables, but word on the street has it that the malva pudding is great.

Kingsriver Estate Restaurant
Another one for a future visit – I’ve heard good things about the bistro-style food at Kingsriver.