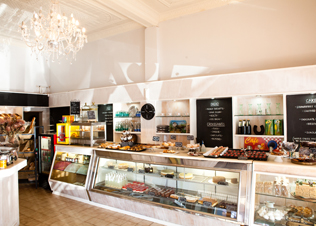 Melville was once the place to hang out – home to some of the city’s finest restaurants, quirky bars and shops that were unique.

This was no plastic mall filled with the same-old same-old, but rather a number of busy streets which drew an eclectic crowd. It was once home to restaurants like Chaplins, Cranks and Pomegranate. The original Tokyo Star operated from what resembled a corridor, while Bassline’s fame spread not only throughout the city of gold but into the wide world. It was the hang-out of celebrities and their schleppers-on as well as ordinary folk.

And then like Hillbrow and Rockey Street before it, Melville took a dive by becoming something of a dive with a reputation of not being safe. Shops closed, patrons fled back into malled safe suburbia, and Melville stopped making a noise.

However, while some establishments are still boarded up, Melville is, thankfully, beginning to make itself heard once again. There are signs of life on 7th Street and 4th Avenue – they’re getting back both their mojo and buzz. Just as Capetonians would never let Long Street fizzle out, Joburgers feel as protective about Melville, idiosyncrasies and all.

So where is a lot of the action happening now? We took a tour to find out.

Café de la Crème
De la Crème is something of an institution in Melville and has gained a reputation for its patisserie, confectionary and baked goods. They sell breads, cakes and croissants as well as a range of sweet and savoury tarts. The café also serves breakfasts and light lunches and is a popular place to pop in for coffee, tea or a smoothie and a sweet treat.

Café Picobella
This is an old Melville favourite that’s still going strong. Its balcony area has wonderful views over the Melville koppies. They serve a good selection of pizzas and pastas and other Italian fare, although service can sometimes be erratic. It’s a favourite for breakfast, too – try the stack of ricotta hot cakes dripping with maple butter or the spicy Italian country sausage with scrambled egg.

Café Mexicho
This is a popular drinking hole for university students, but also serves some great Mexican grub within its colourful and noisy confines. Try the cheese-stuffed jalapeno washed down with a Corona or a frozen margarita. Follow that up with an enchilada or sincronizada, prawn ceviche and a shot of tequila. The guacamole-stuffed onion rings are also a winner.

Kingston on 4th
Out of the ashes of Cool Runnings has emerged this reggae lounge and restaurant. Although there is some food from the Caribbean – think Jamaican jerk chicken wings and a barbeque on Trenchtown Rock Sundays – they also serve burgers, pizza and sandwiches.

Lucky Bean
This spot is a firm favourite with those who like good food, but none of the pretensions that go with it. It’s a contemporary bistro with a great vibe and music played on Friday, Saturday and Sunday afternoons. The burgers are moreish – try the ostrich version. Food and wine recommendations are made by the staff and many wines are available by the glass.

Service Station
Service Station remains one of the suburb’s most popular establishments thanks to its fresh and appealing food. The spot is also known for breakfasts and lunches, which include the weigh-what-you-eat buffet at lunch with quiches and interesting salads. Also try the cheese or charcuterie platter or the home-made burger. Ice-creams are delicious, too, from coconut and cardamom to cinnamon and caramel flavours. Service Station also has a small deli as well as an excellent take-away service for home entertaining. They are famous in the area for their tarts, which include roast tomato and artichoke, broccoli and gorgonzola, and caramelised onion and olive, as well as their lasagnes.

The Ant
Some of the best pizzas in Jozi.

Bambani
A great option for those with kids, thanks to a large play area and child-minders on duty.

Saartjie se Garage
Pull up a hay bale and settle down for dinner and a show in an antique garage. Only open on Thursdays.