These hand-held pizza cones are the perfect fast food 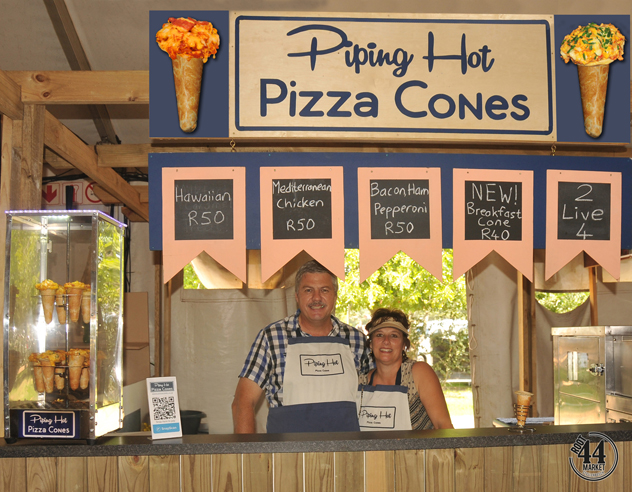 You may have heard of Joburg’s coffee in a cone and Durban’s deep-fried doughnut cones. Now we’d like to introduce the latest crazy incarnation of the hand-held trend, pizza in a cone.

We spotted Piping Hot Pizza Cones at the Root 44 Market at the Audacia wine farm in Stellenbosch this past weekend, but the brand founders, Hannes and Carol de Bruyn and their daughter Danieka, first started selling them in Pretoria in 2013 at the Hazel Food Market in Menlo Park. 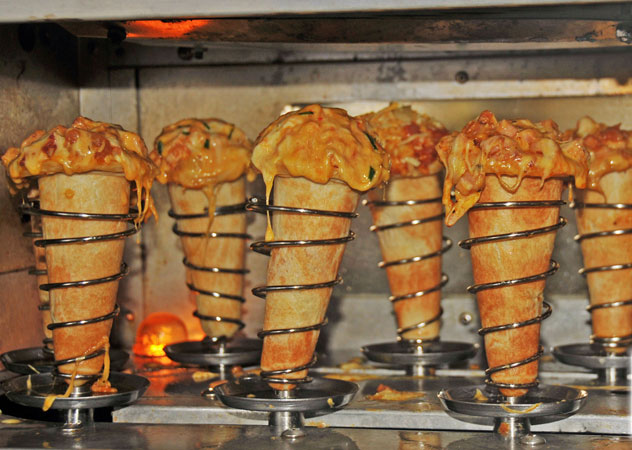 The pizza cones from Piping Hot Pizza Cones. Photo courtesy of the stall.

The ingenious pizza vehicles in question are made with hand-kneaded dough, which is formed into a cone shape, filled with mouthwatering ingredients and oven baked until crispy. Inspired by the wares at USA theme parks, they’re designed as a convenient snack to be eaten on the move – with a thick serviette to mop up any stray sauce or cheese.

The cones come in the following flavours: bacon, ham and pepperoni; ham and pineapple; Mediterranean chicken with sundried tomato and pineapple; smoked cheese griller with bacon and egg; and spinach and feta. All are topped with not one, but two, cheeses.

And if you like locally inspired flavours, the Piping Hot Pizza Cones team has exciting news: they’ll soon be introducing the Bo-Kaap Malay bobotie pizza cone, “A first ever of combining traditional South African cuisine with modern cone technology,” according to Hannes. It sounds very scientific – and tasty. We can’t wait to try it.

Find Piping Hot Pizza Cones at Root 44 Market in Stellenbosch on Saturdays and Sundays and at Hazel Food Market in Pretoria on Saturdays, or visit their website, www.pizzacones.co.za.