Introducing the doughnut and cannoli hybrid: the cannonut

From the cronut and the cronut cake to custard-filled doughnuts and ice cream in doughnut cones, it’s obvious that the fried dough rings are having a bit of a moment. The latest creation to join the doughnut hybrid family is Roast Café‘s Sicilian-inspired cannoli-cross-doughnut treat, the cannonut. 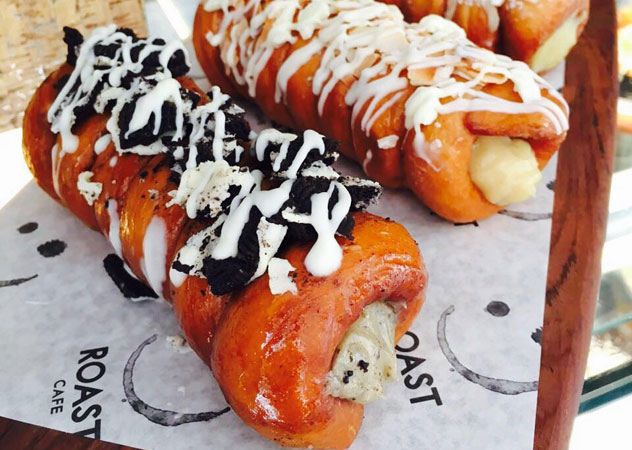 The Oreo cannonut at Roast Café. Photo courtesy of the restaurant.

The Melrose Arch café’s signature Italian cannolis are made with a secret family recipe passed down to café owner, Niki Raciti from her Sicilian grandfather. “We would love to say that our cannonuts were a concept we’d been working on for decades, however, it was a moment of brainstorming brilliance that resulted in the birth of the cannonut”, explains Niki. About a week ago, the Roast team were brainstorming ways of hopping on the crazy doughnut bandwagon and stumbled across the idea of merging their sugary doughnuts with their signature cannoli tubes to make one single cannon-shaped confection.

In the on-site bakery, the talented pastry chefs work hard at crafting these cannoli-inspired pastries, creating new variations and flavours as they go. At the moment the café is baking up the classic sugar-dusted version filled with cannoli cream, the cheekily named Oreorgy filled with an Oreo cream, an option with white chocolate and toasted coconut, and their latest creation, which features peanut butter and M&M’s.

Asked what flavours we can expect next, the team explains, “we are not sure where this craze will take us, however, we do have a couple of ideas brewing. Our next batch is going to consist of familiar flavours that South Africans know and love. We don’t want to give away the details, but Joburgers can expect to see a union between local favourites and our cannonuts.”

Could this mean milk tart flavour? A naartije infused filling? Or maybe it will be a koeksister-cannoli-doughnut hybrid. We’ll have to wait and see.

Roast Café and the Goliath Comedy Club are situated in buzzing Melrose Arch and have merged comedy, coffee and quirky café eats. Look out for other sweet creations at the eatery like their Snickers Bar cake, rainbow cake pops, and a churro French toast ice cream sandwich. (Yes, really.)