Guzzle & Wolf, a new gourmet popcorn store in Somerset West, is adding a whole new level to the candy scene with its range of sweet and salty treats.

The owner, Anita Labuschagne, is known to many as the creator of the popular candy-striped Sweet Temptations gourmet toffees that won our 2012 Eat In Produce Award in the confectionery category. 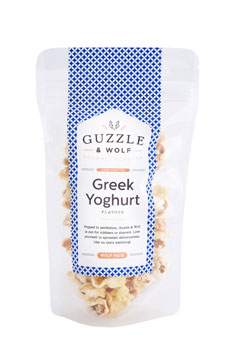 The Guzzle & Wolf range delivers on flavour with less guilt, as the popcorn is made with fresh herbs, many of them grown in Anita’s garden, and mainly locally sourced products. Flavours include salted caramel, feta and black pepper, honey glaze, Greek yoghurt, rosemary and parmesan, coconut and chia seed, honey and sesame, cinnamon and pretzel, and a classic caramelised version made with a secret recipe. Anita is enthusiastic about this new venture: “We’ve taken a snack – traditionally limited to its movie time slot – and given it a new lease on life with somewhat surprising but always inspirational taste combinations.” The popcorn is packaged in laminated sachets with a resealable zip designed to extend its freshness. Find Guzzle & Wolf popcorn at SPAR stores and independent delis countrywide at R15 for a mini pack and R30 for the wolf pack.