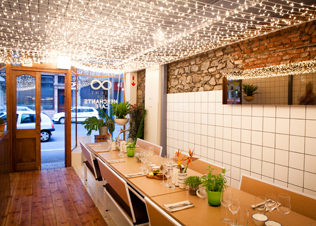 Fans of trendy Mother City eateries The Woodlands Eatery and Field Office will be pleased to hear that Larry Steenkamp (of Woodlands) and Will Hobson (of Field Office) have teamed up to open a hip new restaurant concept on Long Street.

“A marriage of café, bar and gastropub,” is how Will describes Merchants Café, the space which opened last week in Cape Town’s city bowl.

In the evenings, it’s designed to play host to pop-ups, showcasing the food of local chefs who will take over the space for a limited time period.

Hanneli Rupert – who owns Merchants on Long – approached the pair to create a restaurant to complement her store, and hot Cape Town designer Liam Mooney was called in to redesign the space.

The building, which dates from the 1800s, has been given a thoughtful makeover, allowing it to retain a sense of history. Exposed brick and stone mix with matt and gloss bathroom tiles, and 16 000 fairy lights draped from the ceiling create a whimsical dining space.

“Hanneli wanted a very versatile, simple space that could be transformed easily according to the tastes of the restaurants taking it for the week of the pop-up,” Liam told design mag Visi in a recent interview.

Crockery, meanwhile, was created by Michael Chandler, who made 300 blue and white ceramic pieces for the café by hand.

And the food? The whiteboard menu changes daily, but expect lip-smacking breakfasts and lunches, and slightly lighter, snacky suppers – unless, of course, there’s a pop-up chef in residence. All eggs are free-range, and you can add anything from artichokes to wild mushrooms or asparagus to them.

When we popped in for an exploratory lunch, there was moreish slow-roasted lamb on offer (fan of the Woodlands lamb pizza, anyone?) and a whole range of quirky salads; comforting sweet potato gratin; beetroot and feta; asparagus, halloumi, tomato and courgette; and zingy chilli roast broccoli. Coffee comes courtesy of Deluxe (so you know it’s good) and cool, freshly squeezed juices arrive each day from Juice Box, in retro glass bottles.

In the evenings, pop in for light bar snacks and sip on one of the Devil’s Peak craft beers that are available on tap. We hear there will also be a rotating tap for new craft beers, and an alcoholic ginger beer on offer.

The verdict? Just the ticket for a city-slicker lunch, and we can’t wait to see how the pop-up function pans out.

Have you been to Merchants Café? Write us a review here.