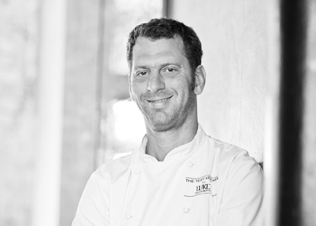 The coveted title of Chef of the Year at the 2011 Eat Out DStv Food Network Restaurant Awards recognises a chef who does more than merely cook. A phenomenal food philosophy, innovation, and the ability to lead a team of chefs all contribute to producing simply mind-blowing meals. This year’s winner is Luke Dale-Roberts of The Test Kitchen.

“Over the last few years I have eaten many of Luke’s dishes, watched how his philosophies have spilled over onto the plate, and listened carefully,” says awards judge, Abigail Donnelly. “This year his thrilling flavours have pushed the boundaries, and eating his food is simply heart-stopping.”

“My time in England taught me to cook and my time in Asia made me broaden my horizons,” says Luke, who spent time cooking all over the East – from Singapore to Malaysia, South Korea and the Philippines. Since moving to Mzansi, Luke’s reputation has grown; during his time at La Colombe, the restaurant won Restaurant of the Year twice, and Luke the Chef of the Year title in 2008. Since opening The Test Kitchen, Luke has continued to create inventive, inspired combinations, taking diners on wild taste adventures.

The word is that Luke is currently working on a new venture next door to The Test Kitchen. Watch this space for more news of contemporary cocktail bar, The Pot Luck Club.