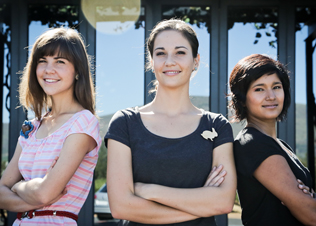 In this, our second last episode of MasterChef, Leandri was seen arriving at 54 on Bath Hotel in Johannesburg on a glistening night, as part of her treat for winning the previous challenge. In a twinkling she was joined at the patio dinner table by her family. It was an emotional meal, with much gift giving, including the box containing her chef’s apron with her name embroidered in red.

In the previous episode, the four finalists had to match up to the tasty molecular gastronomy of Richard Carstens of Tokara. Given ingredients, recipes, tools and advice, they had to replicate the ?ber chocolate plate, called the Chocolate Handkerchief, featuring chocolate done eleven extraordinary ways. A chef’s apron was at stake, to leapfrog the recipient into the very final episode. Leandri won it. Seline, her sister, was a close second, but Kamini and Ozzy did not cope that well. In the end it was intrepid Ozzy who had to retire from the competition.

So on Tuesday night we saw Kamini and Seline arriving at the MasterChef kitchen, wearing elimination black aprons, but both wearing confidence too. The judges, Andrew Atkinson, Benny Masekwameng and Pete Goffe-Wood, welcomed them with new fervour, calling in Luke Dale-Roberts, chef of Eat Out’s Restaurant of the Year for 2012, The Test Kitchen, the man Pete described as ”South Africa’s most exciting chef”. Suspense music peaked as Luke removed the silver dome to reveal… er, what? It had a certain Japanese poetry about it but nobody would have guessed the complexity of elements within that little glass dish. There were pan-fried sweetbread cubes with a morel glaze and late harvest pickled shimeji on a duck liver custard, served with thyme-onion soubise, sprinkled with porcini dust and strewn with crisped kataifi.

This vital challenge was pitting Kamini against Seline, both having to replicate the Dale-Roberts opus. One would leave; one would challenge Leandri for the MasterChef title.

“It’s going to be down to the wire today!” It was a balancing act between the elements: a complicated recipe, technical cooking and taste.

En route from the sous vide cooker, Seline slipped and fell, her bag of sweetbreads behind her. As if that weren’t silly enough, she had to remake a sabayon that had also separated. Kamini had problems too, cooking and recooking her custards several times, finally plating too little anyway.

Kamini finished early, taking her time as the last minutes of their one hour and forty-five minutes ticked by. Seline almost didn’t finish, but managed to plate exactly as Luke had.

“It’s the difference between good and great.”

Seline’s plate might have looked perfect, but the porcini dust was missing and her soubise needed seasoning. Luke told her he’d be proud if it were his plate. Kamini’s was not the looker and her mushrooms and onions were too chunky – but Luke said he enjoyed eating her food.

Eventually taste won over technique, and Seline van der Wat, young civil engineer from Mahikeng, bid her sister and MasterChef farewell. Kamini will battle it out with Leandri in Wednesday night’s final episode for the MasterChef title.