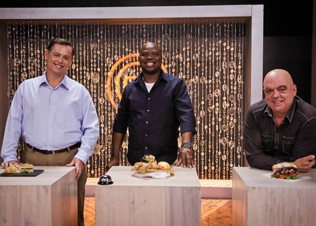 “Welcome to the MasterChef Kitchen.”

Having been welcomed into the romantic, burnished glow of the Nederburg Wine Estate, 16 MasterChef SA contenders assembled for an Invention Test. In the previous episode, 25 Bootcampers had cooked up inspired breakfasts within an hour. Nine cooks were whittled away there; the food standard was deliciously high.

Last night, one brilliant cook of the 16 was to receive the bell – an honourable access to the judges – and six lesser food inventors were named for an elimination round.

A dramatic reveal exposed our judges, Andrew Atkinson, Benny Masekwameng and Pete Goffe-Wood, behind three chef’s toques. A further bit of drama revealed three sarnies before them: Pete’s meaty and robust, Benny’s a homesy bunny chow, and Andrew’s a structured delicacy. The sixteen contestants were instructed to create their own individualistic sandwiches, using ingredients from the super-store type pantry.

“But there’s no bread. You bake it yourself and make a filling to blow us away.”

At this stage of the season, we have real characters coming through, with names instead of screen labels: the food blogger with a fondness for Asian piquancy is Kamini; the two sisters are Seline and Leandri; mister molecular-gastronomy is Neil; the contestant from last season is Joani; the effusive, purple-haired woman is Sanet; and the emerging talent from the last two episodes is electrician Herman.

Ozzy, who had never created a breadcrumb before, was putting together a most acceptable olive loaf. First to finish, Sanet produced an impressive ciabatta, served open, with chicken, marinated mozzarella and olives. It was her passport to the next round. Karen delivered a white-and-brown bunny chow bursting with boerewors meatballs. Neil invented a Moroccan sandwich with a sweet-wine sauce. Leandri created her African sandwich, ‘roosterkoek’ with bobotie filling. Tiron concocted a yummy-looking spicy chicken filling on naan bread.

Kamini’s stand-out sandwich was a kind of Turkish pide, perhaps softer than she’d intended, turned into a wrap around steak and yoghurt with cumin, coriander and chilli. She took the bell and an award of a food and special wine pairing class from the winemaster of Nederburg, Razvan Macici.

“A good sandwich lives and dies on its bread.” Mary, as excited as she was about foccacia versus her dancing career, overdid the rosemary and found herself in the elimination round, among Shannon, Khumo, Neil, Tumi and Seline. Tonight one of this group will be go home, leaving 15 finalists. There are a couple of exceptionally talented cooks in this elimination group, so we’re in for very exciting viewing.