MasterChef SA: what happened to the other 15? 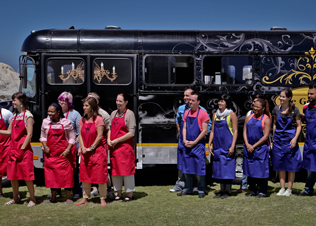 They may not have taken home top honours, but we’ve got an inkling we haven’t heard the last from some of our favourite personalities. A coffee roastery, a smokehouse, charity initiatives and possible tv shows: the runners-up have got a lot up their sleeves.

Leandri van der Wat @This_is_Leandri
MasterChef position reached: Top 2
Highlights: Leandri tackled bisque at an Italian restaurant in Addis Ababa in episode 20, her brandy and apricot ostrich fillet, with sorbet and butternut puffs impressed Prue Leith in episode 23, and it was a truly taxing dish in the final episode that sent her home.
Then: Masters student
Now:  Leandri has started a coffee roastery called Roast Republic, to raise funds to send underprivileged children to school. She’s also writing for The Coffee Mag, and looking for a publisher for a cookbook with sister Seline. The pair is also catering private parties together to raise funds for their Foster Care Home network.

Seline van der Wat @SelineVW
MasterChef position reached: top 3
Highlights: She “whipped the living daylights” out of the egg yolks in the hollandaise challenge in episode 6 and remembered high school science experiments with Richard Carstens’ technical chocolate hankerchief. In the end, it was forgetting the porcini dust and failing to season her soubise enough that sent her packing in episode 27. Luke told her he’d be proud if it were his plate.
Then: Renewable energy plant developer
Now:Seline has started a vintage cake and sweet brand and is blogging with sister Leandri at www.beautyandthefeastfoodblog.wordpress.com. The sisters are also busy developing a concept for a cookbook and will be doing demonstrations at several events. Seline is also keen to get kitchen experience in a professional kitchen. “I feel that learning is vital,” she says. Shops, a restaurant, a show and a skills transfer program for kids at a local market are also part of her dreams for the future.

Jason Steel @jasonsteel100
MasterChef position reached: top 5
Highlights: Jason tackled risotto for the first time in his life in episode 10, got a thumbs up for his salt-and-pepper prawns with popcorn, chorizo and sweetcorn purée in the pressure test in episode 12, but a too-solid mousse and an excess of meringue sent him home in episode 25.
Then: graduate and front-of-house waiter at The Test Kitchen.
Now: Jason is still working front-of-house at The Test Kitchen, “It’s an awesome place to work, to be exposed to food of such a high calibre”, says Jason. He’s also plotting a collaboration with Tiron; the pair hope to produce a TV show.

Ozzy Osman @oh_so_ozzy
MasterChef position reached: top 5
Highlights: Ozzy, who had never created a breadcrumb before, was putting together a most acceptable olive loaf in episode 5. In episode 10 he was a bit taken aback given his Muslim background but not too “freaked out” when chef Chris Erasmus showed the team how to make terrine using the whole head of a pig. His panna cotta “curse” hovered and he broke down before the judges in episode 14. Judge Andrew Atkinson said he should feel proud of himself after tasting his dish.
Then: Accounting student
Now: Ozzie is studying for his final exams for his accounting degree. In the mean time, he’s applied to enter cooking school next year. His ultimate dream? To open a halaal fine dining restaurant in Johannesburg.

Tiron Eloff @TironEloff
MasterChef position reached: top 6
Highlights: Tiron made aninjera-inspired, coffee-spiked filled pancake in episode 19; wowed with walnut and goat’s cheese tortellini in spiced broth in episode 16 and was famously sent home because his sauce was ‘too winey and needed more reduction’ in episode 23.
Then: video store clerk
Now: Tiron is running a private catering company, is working as a brand ambassador for Makro, and also has plans to open up a restaurant in Johannesburg towards the end of the year. “A smokehouse with craft beer,” is how he describes the concept.

Karen Els @kelsfoodie
MasterChef position reached: top 7
Highlights: Karen had a Masterclass at The Creamery  in Cape Town in episode 12 after winning an invention test with her beef fillet skewers with patatas bravas and red bean salsa in episode 11, (read more about Karen and Kate’s ice cream capers); created an innovative not-tiramisu, creamy on a popcorn base in episode 19; and made a vegetable stew with pasta for her sportsman husband in episode 21 (her last).
Then:  stay at home mom of three
Now: Still a devoted mom, Karen has started a catering company called Heartfood Catering (Karen.heartfood@gmail.com or on 0763811823), and is also working on a range of ice creams, focusing on sweet treats for diabetics and the lactose intolerant. She’s also involved with MNet Cares and recently participated in a fundraising event with some of the other MasterChef contestants.

Amanda Beck @quirky_mandy
MasterChef position reached: top 8
Highlights: Amanda produced a seemingly crazy boerewors wonton dish in episode 11, but she made it through. Her failure to produce decent phyllo samoosas after forgetting oil in the pantry put her in a pressure test. Her crusted duck was a highlight in episode 17, but her ravioli filling in her Italian dish let her down in episode 20.
Then: Consultant and waitress
Now: Working at DW Eleven-13’s sister restaurant, The Grazing Room, as a commis chef. She has also been doing private dinners and charity events in the Joburg area.

Khumo Twala  @simply_khumski
MasterChef position reached: top 10
Highlights: Khumo weathered a challenging pressure test with David Higgs in episode 14, but it was her duo of savoury pancakes – spicy ostrich pancake with labneh, mussel and garlic – that didn’t quite work for the judges in episode 16.  “You’re 19 and we haven’t seen the best of you yet,” comforted Pete.
Then: student
Now: After the show, Khumo enrolled in a culinary school in Pretoria and is currently working on her culinary arts diploma. She’s done a two-month internship at DW Eleven-13. She’s offering catering for intimate events for under 30 people, as well as fun cooking demos. As for the future? Khumo would love to open a restaurant, “But I am not in a hurry for that. Being only 20 years old, I figured that it would be fun to experiment on all things that the culinary world has to offer.”

Mary Martin @mary82jn
MasterChef position reached: top 12
Highlights: Mary, as excited as she was about foccacia versus her dancing career, overdid the rosemary and found herself in the elimination round in episode 5. She whisked her heart out and was very doubtful about the finished product of her hollandaise sauce, but prevailed after successfully completing the pressure test in episode 6. In episode 14 she definitely felt the pressure in the kitchen and didn’t make the sugar shard for the dish because time had run out. Her panna cotta, however, was perfect, the sorbet passed muster, and the judges liked her take on David Higg’s dish overall; but the judges surprised her with a double whammy elimination along with Herman.
Then: a dancer and public relations consultant.
Now: Mary has started an events planning and catering company called Cooking in Heels (the website will launch soon).

Herman Cloete @CloeteHerman
MasterChef position reached: top 12
Highlights: Herman created the best marrow dish in episode 7, and won himself a masterclass with Chantel Dartnall at Mosaic, but it was the pressure test with David Higgs in episode 14 that ended his MasterChef dream, thanks to poor presentation and a sagging panna cotta.
Then: electrician
Now: Herman’s been a busy fellow! Right now, he’s working with Rhapsody’s, developing some new recipes for their menu. Future plans include a cooking school and possibly a restaurant in his hometown of Witbank, as well as a book aimed at bachelors. He was also involved in the recent MNet cooking fundraiser with Khumo, Karen, Joanie and Amanda.

Sanet Labuschange @ZanLabz
MasterChef position reached: top 13
Highlights: First to finish, Sanet produced an impressive ciabatta, served open, with chicken, marinated mozzarella and olives in episode 5. It was her passport to the next round. She passed an elimination round in episode 10 when contestants had to correctly guess the combination of spices by tasting it. Sanet spent too much time reading through the recipe and ingredients in episode 12 and put herself under pressure towards the end, barely getting the four plates ready as the judges counted down. This cost her an elimination, sadly.
Then: financial manager
Now: Sanet is a home cook, caters for small functions and has a cooking school called Cooks in Action: http://www.cooksinaction.blogspot.com/

Neil Lowe @NeilLowe
MasterChef position reached: top 14
Highlights: Neil invented a Moroccan sandwich with a sweet-wine sauce which placed him in an elimination round in episode 5. His hollandaise sauce in episode 6 was declared “a winner” by the judges. Unfortunately in episode 10  judges told Neil that basic salt-and-pepper seasoning was lacking in his fish dish and that his risotto portion was too big, which sent him packing.
Then: communications consultant.
Now: Neil has started a blog, Lunch on Mars, where he showcases modern tools and techniques for the home kitchen, consultant and cook. He’s also working on a range of products, the first of which is a garlic confit. He has also developed a version of Heston Blumenthal’s Meat Fruit for ClemenGold (which we were lucky enough to taste), a sublime chicken liver parfait coated in a ClemenGold purée gel served with sourdough toast. He hopes to create more bespoke offerings for them and other brands in the future.

Tumi Moche @BoitumeloMoche
MasterChef position reached: top 15
Highlights: Tumi had the judges swooning with his seafood fettucine in a creamy mushroom sauce and the “best curry” Benny had ever eaten in episode 2.  approached the elimination challenge “like a man possessed according to Pete Goffe-Wood in episode 8 (his last).
Then: financial analyst
Now: Devoted dad Tumi is still working his day job, but he’s pursuing his dreams too. He’s doing catering and working on a line of homemade pastas. In the future, there may be a TV show and basic cooking classes for adults. He would also like to start an outreach program teaching disadvantaged children to cook.