Thanks to Twitter culture, the recent LA movement and hipsters, food trucks are generally associated with Generation X and Y. But 79-year-old Gerhardt Hundt is helping to raise the average age of the food trucker by several decades with his new food truck, Curry in a Hurry.

Gerhardt, who has worked as a diamond jeweller, brewery manager, in a steel works, and at an aluminium factory in his professional life, says he has always loved cooking.

“I qualified as a chef in the navy. I remember our big examination: I cooked curry and rice, and they said, ‘Okay, you’ve got to cook curry and rice for 300 officers.’ It was fantastic!”

After purchasing a trailer – which almost made a getaway on the N2 when the towing mechanism broke – Gerhardt is finally cooking for people once more through his new hobby. 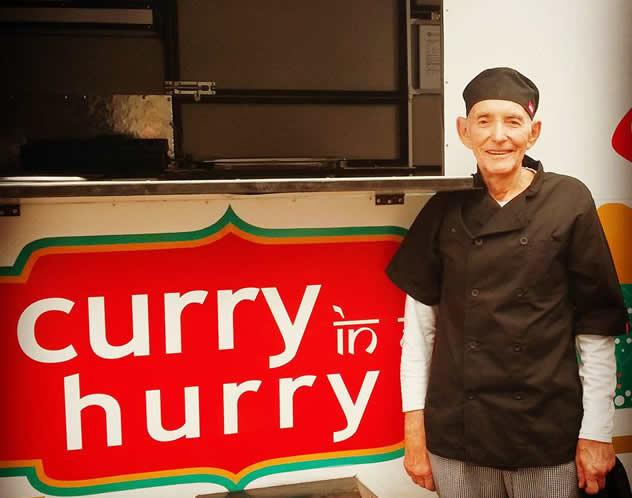 The truck had its first outing at Groote Post Market two weeks ago – and it was a roaring success. “I was so chuffed,” says Gerhardt. “It went down really well. I ran out of food. I had to cook more rice three times in the trailer.”

Gerhardt has also applied to sell at the Blouberg Market and is holding thumbs to hear the result of his application by the end of September.

His signature dish? Mutton curry, although you’ll also likely find chicken curry, chicken and prawn, beef and mutton breyani on the menu. “I mix my own curry powder,” he says. “That’s my secret. I don’t like it too hot; I like you to be able to taste something else too, some spice.” Gerhardt also makes his own plum chutney, pickled chillies and atchar.

Gerhardt does have help – from his youngest daughter: “When you’re old, you can’t do everything yourself,” he is quick to admit. He is not overly interested in slowing down, however, despite approaching his 80th birthday in January. “As long as I keep going, I’ll keep going!”