New review: Our first taste of The Banting Kitchen in Green Point

It’s being touted as the world’s first low-carb, high-fat restaurant, but what does the food actually taste like? Katharine Jacobs paid The Banting Kitchen a visit to find out if the food is delicious – or edible, for that matter.

I suppose I should confess that I am not one for diets. I have less self-control than the average reality TV star, and even if I wasn’t contractually bound to order dessert, I’d still be one of those awful individuals who’d eat half of yours. So it is with not a small amount of scepticism that I make a booking at The Banting Kitchen in Green Point, touted as the world’s first banting restaurant.

The eatery (housed in the Cape Royale Hotel, where Bistro 1800° used to be) opened up in late August to an avalanche of press coverage. But I was dying to know what the food tasted like. Would it be weird and hippyish – like the first wave of vegan or gluten-free treats with their strange textures and odd, misleading colours – or would it genuinely be edible?

First off, we’re greeted with a plate of complimentary low-carb bread and butter. It’s a grey sort of colour, and I sniff it suspiciously. But, slathered in butter, it goes down just fine and tastes like a dense seed bread. So far; so good.

On the starters menu, there’s little to give away the fact that this is a modified menu. I’m sort of disappointed that it’s not more weird. The goat’s cheese and baby marrow quiche (R65) is crustless (and tasty, though it could do with a hint more cheese), but dishes like creamy garlic mussels with white wine, fresh herbs and tomato (R62), and creamy garlic and chilli chicken livers with fresh herbs and paprika oil (R55) would be at home on any bistro menu. The home-smoked salmon starter comes as a large chunk of beautifully tender (but slightly too smoky and salty) fish, with a delicious creamy sauce. The tasty roasted sweet potato and crème fraîche salad is a triumph – it may well appear on my personal braai menu this summer in lieu of potato salad. 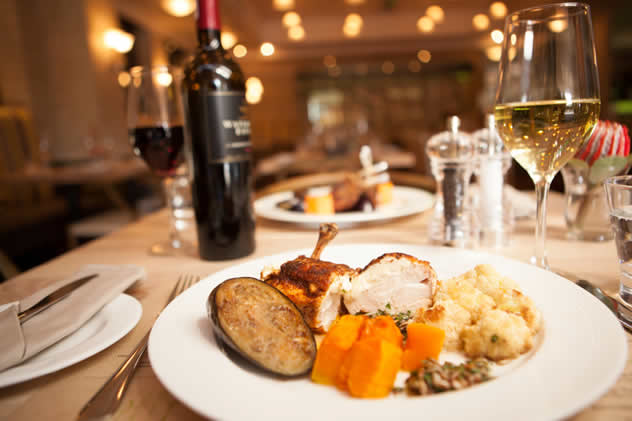 Food at The Banting Kitchen . Photo courtesy of the restaurant.

For mains, we try the wild mushroom ‘caulisotto’ with parmesan, crispy shiitake and truffle oil (R95). It’s flavoursome and creamy, but more like eating a liquidised portion of cauliflower cheese (not the worst idea anyone’s ever had) than an actual risotto. The chicken supreme is beautifully succulent, oozing its spiced cream cheese stuffing over the pan-fried aubergine, pumpkin and roasted cauliflower in a manner that it renews my faith in ordering chicken at a restaurant.

For dessert, we plump for juicy yet firm red wine-poached pears with lemon curd mascarpone and a satisfyingly sweet red wine syrup (R49). The baked cheesecake (R59) has a fantastic creamy texture, with its brownie crust imparting a rich chocolate flavour to the whole affair.

Ranging from Porcupine Ridge to Waterford and even Taittinger bubbly, the offering has something for every pocket. Usual suspects like Kleine Zalze, Spier, Creation and Warwick also make an appearance. There are several options of each varietal are available by the glass, so you can enjoy your wine allowance in moderation. (Wine is on the ‘occasionally’ list, but still a better banting choice than beer). 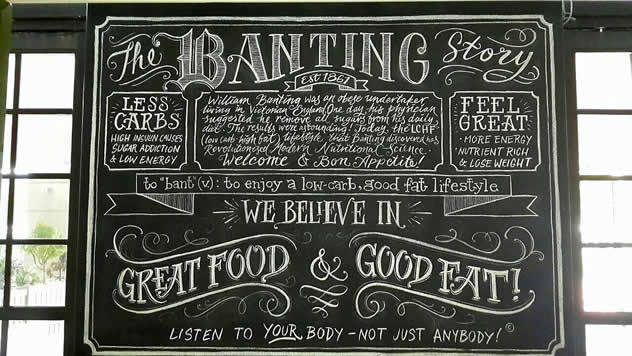 The Banting story . Photo courtesy of the restaurant.

Staff are professional and well trained – as one might expect from a hotel team – but are also friendly and warm. The food comes out smartly.

Blonde wood floors and tables are offset by a touch of mint green. A quirky blackboard and contemporary chairs add a little injection of hipness to the space. Outdoor tables will spill onto Somerset Road in summer. 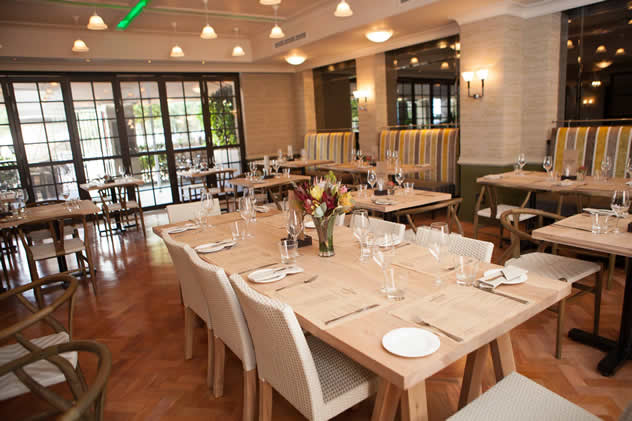 The interior of The Banting Kitchen. Photo courtesy of the restaurant.

The restaurant is open for breakfast, too.

The joy of the LCHF diet is its insistence on real food, which means that weird substitutes and bizarre textures are nowhere in sight. It’s all incredibly rich; we find ourselves filling up just halfway into the mains, which I believe is the whole point. We are, of course, far more dedicated eaters than your average dieter, and are doing our duty by ordering three courses, but our greed also suggests that this food is actually really delicious. The silken sauces are delicate and full of flavour and the meat is cooked with finesse. Do I feel thinner after the experience? That’s another question entirely.