Melville already boasts many internationally inspired restaurants and now a Turkish eatery joins the ranks of those from Italy, Mexico, India and the USA. Simply named Turkish Restaurant, the new space will no doubt end up being called Bagram’s (after the owner) the way its brother restaurant in Mayfair is still called Burhan’s although Burhan himself has long gone. That Mayfair sibling is also part butchery, the source of the wonderful lamb at Turkish Restaurant. 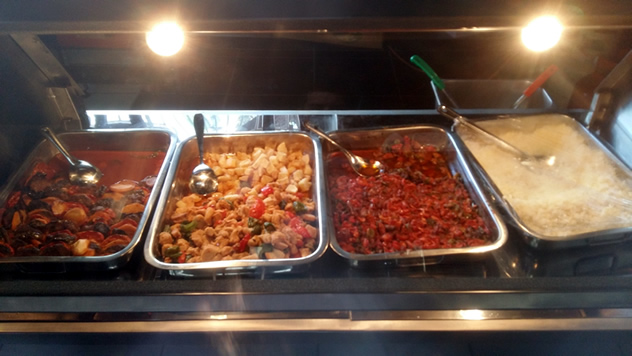 Foods on offer at Turkish Restaurant. Photo courtesy of the restaurant.

Owner Bagram Kara explains, “We wanted to bring Turkish cuisine into a more fashionable area. There is a perception among some people that Mayfair is sort of dangerous or something.”

Trying his hand at trendy décor might have been part of the appeal, too. Where Burhan’s is white and bland, Turkish Restaurant is mocha-striped with designer jelly baby chairs. It occupies one of Melville’s original corner shops, so the entrance is up a couple of steps from the street. Further inside, the grill area features neat rows of glinting swords pierced through fragrant kofta or spiced ribbons of meat, ready for the flames. 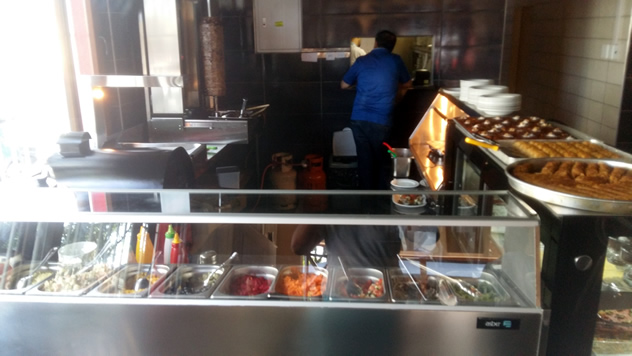 The kichen at Turkish Restaurant. Photo courtesy of the restaurant.

As for the food, diners can look forward to eskander, thinly cut grilled lamb basted with tomato and softened with sheep butter, every day instead of only on Sundays. The menu also features döner kebabs, shwarmas of various meats and vegetables and delicious salads. Among the desserts is the flat rice pudding served Turkish-style with cinnamon, cherries or pomegranate arils.

Ready-made mince meatballs can be taken home, as can the heavenly yoghurt in huge tubs with a delicious curd crust. If you’re eating in, the yoghurt is lavishly ladled into salads and onto plates before the arrival of the meat.

No alcohol is served at this Halaal restaurant, but the drinks offering is varied with mint teas, Turkish coffees, chais, sodas and fruit cocktails. You can also enjoy your meal with a cool savoury lassi called ayran. 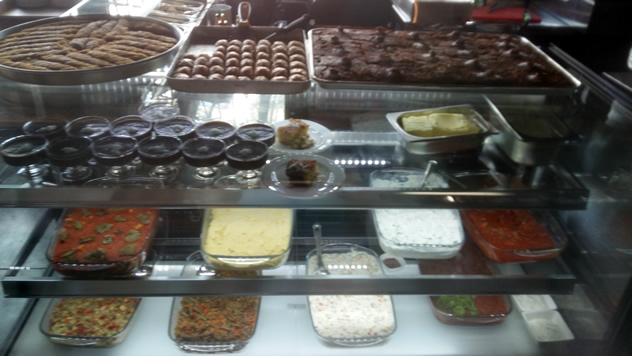 Sweet treats at Turkish Restaurant. Photo courtesy of the restaurant.