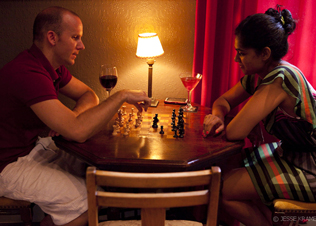 “Yebo gogo,” answers the barman, when we ring him from the old rotary dial telephone on our table. There’s no need to phone him, really – he’s barely out of hearing distance – but we’re at Alexander Bar and Café, Cape Town’s newest watering hole, and this, apparently, is how it’s done here.

The bar is the brainchild of playwright Nicholas Spagnoletti and software engineer Edward van Kuik. “It’s been a dream for ten years,” explains Nicholas. “Cape Town has such nice restaurants, but we felt there was a gap in the bar scene for a bar where it’s about talking, and meeting all kinds of different people.”

To help get people talking, each table is fitted with a telephone, each with its own number, and patrons can dial not only each other, but the barman too. “If you’re really bored, you can also listen to the BBC world service, or leave comments.”

For the more timid amongst us, there is also a service whereby patrons can send telegrams via their cellphones, which print out automatically and are then delivered by a waiter. There’s even an old-style typewriter with paper on which you can type a message. “It’s a good feedback opportunity,” says Nicholas. Those too polite to complain in person are able to leave comments and suggestions. Others leave behind witticisms, poems and thoughts. “There have been some hilarious ones,” Nicholas tells me.

If words aren’t your thing, there’s also a range of board games to play. “We found a strange little chess table at an auction,” says Nicholas, “and it’s surprisingly popular. If you give people something to do, they relax and interact more.”

In order to keep conversation healthy there’s no loud music; instead, muted jazz and world music create a stylish atmosphere. Will they have live bands? “No, the entertainment is the people,” says Nicholas.

As for the drinks, they’re the classic options in keeping with the antique décor. There’s a range of cool Martini cocktails to sip, and a wine and whisky menu. “We kept the wine menu to the smaller local farms,” Nicholas explains. The menu displays Môreson’s Miss Molly range (named for the wine estate’s dog), along with certain gems from Sterhuis.

The emphasis is firmly on bar rather than restaurant, however. It was only after calls from the patrons that Nicholas and Edward decided to launch a new bar food menu, based on New York classics. There’s a Great Gatsby for those with a big appetite, sandwiches with fillings like gravadlax on rye and several salads, including a Waldorf and a seared beef noodle salad. The kitchen will stay open until midnight, making this not only a fun place to meet new people and hang out with old friends, but also a great late night snack spot.