Radium Beerhall: soaked in history, beer and the blues 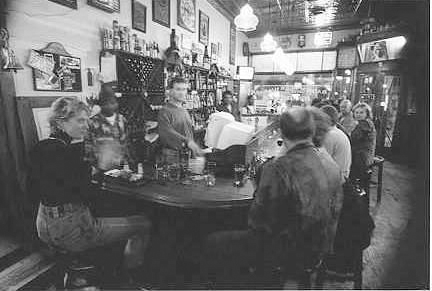 While we forgive you for thinking The Radium Beerhall is some craft brew-serving, hipster-accommodating joint, we are happy to inform you that there is not a single decorative typewriter in sight. In fact, if the Radium still had a typewriter, it would probably be a relic from the time when people actually used typewriters – and hated them.

The oldest surviving bar and grill in Johannesburg’s history is rich and colourful, weaving strands of colonialism with colourful stories of the many struggle fighters who frequented the outfit. Since the Radium Tearoom opened in 1929, political systems were established and abolished, freedom was lost and regained and the tearoom officially turned into a beer hall. Miraculously all that history doesn’t mean you can’t find a mighty fine pizza here. In addition to a good dose of history, the Radium Beerhall prides itself on its live entertainment. This is the place in Johannesburg where you are most likely to catch dirty, sweaty blues live, quite often in the form of Dan Patlansky. With so much going for it, it’s easy to forgive the fact that some of the menu items – “potatoe”, “fetta” and “mussel’s” – were obviously added in the days before spellcheck, probably by typewriter. 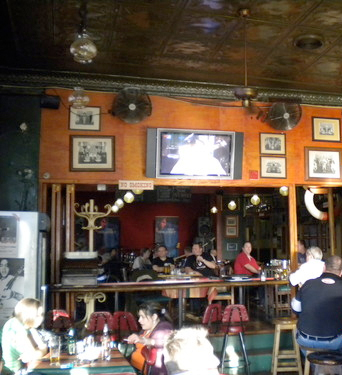 The Radium Beerhall proves that longevity requires equal parts move-with-the-times and stick-to-what-you-know. The extensive menu is still very much that of the original grill, with a few modern twists thrown in for good measure. The weekly specials – half-price pizza on Tuesdays and 500g queen prawns on Thursdays – offer excellent value for money. In addition to Mozambican-style seafood dishes, grilled chicken offerings and meat aplenty, the menu also boasts a very decent slice and pasta dishes. Try the Neil Solomon pizza with mushrooms, sundried tomatoes, olives, garlic, chilli and feta. Don’t pass up on a generous dash of the famous Radium peri-peri sauce. The dessert menu employs a similar philosophy of joining old and new, with classics like a perfect Irish coffee and the great South African milk tart and more exotic treats like cream caramel and wild berry cheese cake. And when all else fails, you can never go wrong with a good lemon meringue.

The Radium Beerhall is a bar. Actually, it’s more of a pub. It’s the type of place where the patrons watch sport while sipping a hard tack and Castle Light, often at the same time. Even so, it boasts a sizeable wine list, with a combination of local and Portuguese wines, for long and indulgent nights of blues and red wine. It’s a wonderful kind of schizophrenia.

This Orange Grove pub runs with the efficiency that comes with many, many years of experience. It gets quite crowded over weekends, but remains a well-oiled machine. If you have a sizeable appetite, don’t risk showing up without a reservation, especially on nights when there’s live music.

The venue is unpretentious and lived-in. Red-and-white tablecloths, a lot of wooden finishes and pictures and memorabilia of the club’s long history give the Radium the feel of a neighbourhood hangout with a touch of reverence.

Have you been to the Radium Beerhall? Let us know what you thought by writing a review.