The Real Meal Revolution is about to hit the UK

Bestselling cookbook The Real Meal Revolution is on the brink of becoming a worldwide sensation following its runaway success in South Africa and subsequent explosion of the low-carb high-fat (LCHF), paleo and banting diets.

The book has been completely remade for the UK, featuring the names of professor Tim Noakes, nutritionist Sally-Ann Creed and chef Jonno Proudfoot on the cover – with fourth original author, David Grier, conspicuously absent – and will be published by Little, Brown and Company at the end of July 2015. 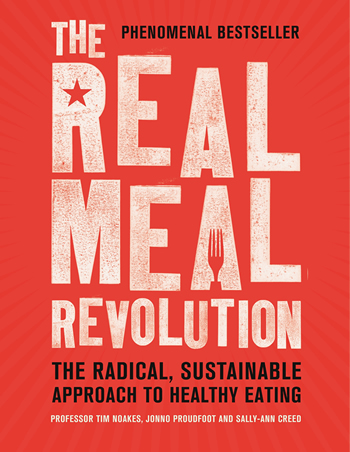 There are fifteen new recipes, and the book was restyled and reshot by Caroline Gardner and Toby Murphy in Cape Town, and redesigned in the UK by Andrew Barron. The text has also been revised for an international audience.

Little, Brown and Company editor Duncan Proudfoot says, “We’re incredibly excited to be publishing The Real Meal Revolution in the UK and hopefully, in due course, in many other countries – we have sold Dutch rights and anticipate more rights sales. Copies of the book have also been sent directly from the printers in China to Australia, where there is tremendous interest.”

In keeping with trends, the new UK edition also features a link to an app with additional content. (This was set up and is run by The Real Meal Revolution in South Africa.)

The book is yet to hit shelves, but pre-orders from all retailers, including Amazon, have been strong. “We’re confident that we’ll sell many more than the exceptional number of copies sold in South Africa to date,” says Duncan. Quivertree, the publisher of the first South African edition, puts sales at over 200 000 copies to date.

“Yesterday [20 July 2015] The Real Meal Revolution was up to number 74 in all books on Amazon.co.uk, having been in the top hundred for two days – impressive for a book not yet published,” says Duncan.

What’s next? A partnership with Virgin Tribe (reaching 50,000 Virgin staff across gyms, the airline, trains and more), a deal with a food manufacturer, a Facebook campaign, competitions and more.

Watch out, UK! The revolution is coming.