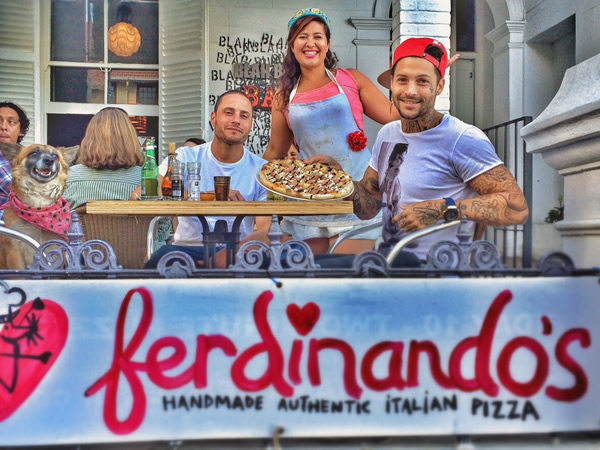 Ferdinando’s on Kloof is a quirky, fun spot for superb pizzas. Opened by first-time restaurateurs (and golden-hearted hippies), the eatery genuinely lives its philosophy of ‘flour power’, says Linda Scarborough.

South African artist Kimon (Kiki) Bisogno and Italian chef Diego Milesi met up on their travels around the world – detailed in illustrations and anecdotes the menu – and eventually made their way to Cape Town, where they inadvertently started a ‘secret pizzeria’ in their Waterkant home. Their pizza oven became so popular with neighbours and friends they had to move things more formally to this venue on Kloof Street. Namesake Ferdinando is the big boss responsible for quality control, who can be seen pacing the venue most nights. He’s also a dog.

“It’s not really a restaurant,” says Kiki, explaining that she and Diego wanted it to feel like more of a supper club with a welcoming, community feeling. The couple is excited about opening another Ferdinando’s in Observatory (at Lion Corner, 205 Lower Main Road) next month. People are nostalgic for the original Ferdinando’s at their home, Kiki says, sounding more than a little wistful herself, and she can’t wait to recreate that vibe with their living quarters upstairs and the pizza club downstairs. The opening is expected to be in early June.

If you’re not already peckish when you arrive, the complimentary breadsticks will get your appetite raring to go. Served in a little copper cup, they’re made of pizza dough and taste magnificent dipped in homemade aioli. Even better: another batch arrives after the first disappears in a flurry of dipping, chewing and happy hmm-ing.

A little blackboard menu of starters is brought around, but our first choice, the prawns wrapped in pancetta, is sold out. We decide to go for the antipasto platter – a tasty selection of olives, creamy homemade feta, artichokes and charcuterie – and the buffalo mozzarella with tomatoes and rocket. It’s a good start to the meal, and we end up putting some of the bits and pieces on our pizzas when they arrive. 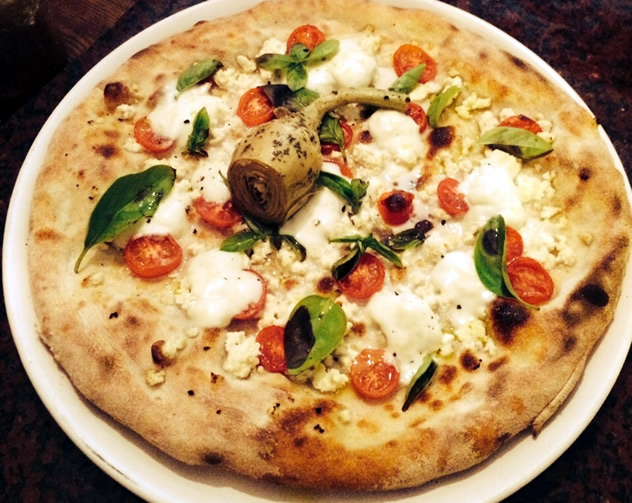 Now for the reason you’re really here: Cape Town’s best pizza, as some would have it. Cooked in the wood-burning oven that conspicuously bulges into the open kitchen, the thin bases smell and taste delicious. They’re not too crackly or bubbly, providing enough chewy texture for the tomato sauce, cheese and toppings to hold on to.

The options on the pizza-only menu – a ring-bound booklet of illustrations and handwritten stories – are divided into classic, famous, and veggie delights. The choices are numerous and varied, especially for non-meat-eaters. Despite there being some traditional Italian toppings, things can get quite unorthodox, such as on the Vegana, with no cheese, baby marrows, peppers, aubergine, avo, cherry tomatoes, red onion and sesame seeds; the French Prince, with bacon, camembert and cranberries; or the Kimonster, with spicy salami and pineapple.

For something simple and classic, the Parmigiana gets my vote, topped with a few slices of pan-fried aubergine, provolone and mozzarella before being baked to perfection. If you really want dessert, they have seasonal fruit and ice cream, but you might be tempted to rather just have another pizza.

It’s an unusual arrangement: Ferdinando’s serves food only, and the bar that you pass on the way inside is a separate business entirely (Blah Blah Bar). If you’re thirsty, you need to go over to the bar to order, pay and bring it back yourself. It’s not really an issue, though. It feels like being at a house party with a well-stocked bar and the best homemade pizza you’ve ever had.

Dangling bead curtains and woven baskets dominate the ceiling of the small kitchen-side room in the converted Victorian house. There are two long tables, and chances are you’ll be sharing with some strangers, perched at different heights on barstools or benches. In good weather you could also find a spot on the spacious street-side patio or in the slightly more sheltered courtyard with candlelit tables. Blah Blah bar hosts live music in its front room. 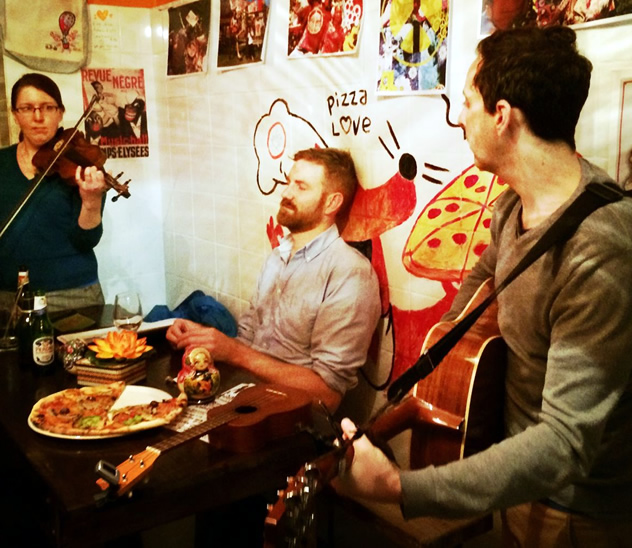 On the night we visit there’s only one waitress taking orders and serving pizzas. She is in good spirits though, and although there’s a bit of a wait for the pizzas, the time flies if you’re with friends. It’s extremely casual and homey: instead of napkins you are offered squares of kitchen towel. Drinks are self-service from the bar and pizzas are paid for in cash only. It all works if you just lean into it.

Buy a couple of jars of homemade aioli – ‘sure to keep vampires away’ – on your way out.

Eat Out reviewers dine unannounced and anonymously, and pay for their meals. Have you been to Ferdinando’s yet? Tell us what you thought by writing a review.