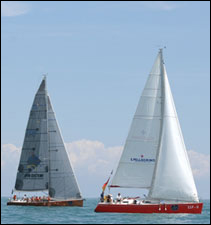 Being part of a yacht race in the magical city of Venice, with world-renowned chefs battling it out in the galley below, sounds like a dream. San Pellegrino made it a reality.

The seventh annual San Pellegrino Cooking Cup took place in Venice, Italy, on Saturday 30 June, and Lisa van Aswegen, Assistant Editor of Eat Out along with Eat Out Chef of the Year 2006, George Jardine of Jardine restaurant in Cape Town, participated in the event of a lifetime.

International chefs from around the world participated this year on the 10 San Pellegrino boats. From our very own George Jardine, to Michelin-starred Angela Hartnett from the Connaught Hotel in London to Vincent Beau from Australia and Yoshihiro Narisawa from Japan. Other countries represented were Italy, France, Spain, United Arab Emirates and Switzerland.

The culinary judges included mostly Italian chefs and food journalists as well as Joe Warwick, Editor-in-chief of Restaurant Magazine as well as Andreas Larsson, Best Sommelier of the World 2007.

The aim of the day was for the chef to create a main or starter dish, with ingredients bought in the Rialto market in Venice that morning, and plate up three dishes for the judges of the day. The criteria for judging was taste, presentation and difficulty of execution.

First thing on Saturday morning all the participating chefs went to Venice’s age-old Rialto market to buy fresh supplies for the cooking competition that lay ahead. As the stallholders were setting out their fresh fruit and vegetables and the fish stalls laid out the freshest bounty of the sea imaginable, the chefs started getting excited at the prospect of all these seasonal, beautiful ingredients. Everywhere chefs were dashing about, poking, prodding, sniffing produce to see what’s freshest, changing their menus in their heads to make use of the best produce to try and win the Cooking Cup.

George was in search of lobster, and he found the mother lode. Three massive, live Atlantic blue lobsters were purchased with a satisfied smile. Now to buy the rest of the ingredients. Unfortunately George’s secret ingredients: agar agar, star anise and vanilla pods were in his wife’s delayed luggage, so Louise Jardine and I set about trying to find a spice shop somewhere in the labyrinth of Venice’s streets.

With some help from two very kind Italian men who were with us on our visit (who we later realised were two of the judges of the competition), we found a perfect supply shop that had everything George needed to complete his dish. The shop-owners must have thought we were mad as we squealed with delight that they not only had star anise and vanilla, but rare agar agar too – essential for George’s dish.

Before the boat came to collect us, I managed to buy some sweet Sicilian peaches: flat little babies (almost shaped like little pumpkins) with pale, succulent flesh. I wish we had more time there – and a kitchen at our disposal for the duration of our stay. Gorgeous bunches of fresh garlic, zucchini with its orange flowers still intact, porcini mushrooms and a myriad organic tomatoes – from bulky and big to tiny ones on the vine begged to be turned into unforgettable dishes.

The fresh seafood was also a sight to behold: piles of fresh scampi, prawns, vongole (clams) and exquisite steaks of swordfish and tuna lined the tables. Even live eels were to be found around a corner – you simply follow our shrieks to find them!

All too soon it was time to head back to the Island of San Giorgio Maggiore, from where the race would start, to load up the galleys with our haul. Waiting for the boats to fetch us, everyone oohed and aahed over George’s massive lobsters – they really impressed the crowd already and they weren’t even cooked yet!

Although there was a severe lack of wind, and the length of the regatta course had to be shortened, our team (consisting of clients of San Pellegrino from Africa and Middle East) on board whiled away the day basking in the Venetian sun, taking turns at the helm, and doing some serious networking and sharing stories of culinary life in South Africa, Turkey and Dubai.

Although George had many hours to prepare his dish of lightly poached lobster with a salad of aromatic herbs and summer vegetables, there was still a frenetic scramble in the last few moments of preparation. I was even roped into cleaning porcini mushrooms and picking teeny leaves of tarragon for the salad. Hope I did OK, chef?

As we drew up to the judges’ yacht, George donned his official chef’s jacket and presented his exquisite and delectable dish for the judging. It was another hour to the docks, so he set about making us all each plate of his entry dish, and then made up a spontaneous risotto: filled with decadent lobster, fresh veg and loads of Parmigiano Reggiano. Utterly delicious – and, in our opinion, award material.

George’s dish did quite well on its own, but unfortunately, as our yacht sailed onto a sandbank and we had to switch the engines on, we lost major points on that for the sailing. Best overall points went to the yacht Fanatic with chef Attias Tarlao with his dish of King Prawn Chess.

The frenetic day culminated in a gala event at the Giorgio Cini Foundation on the island of San Giorgio Maggiore – overlooking the lagoon and St Mark’s Square in the distance. About 400 international guests congregated to enjoy starters laid out in the square of the Foundation (previously a monastery). Beautiful fresh produce from small producers made for perfect nibbles.

Then on to dinner in the garden: this truly magical setting was complemented by excellent cuisine from chef Luca Brasi. Fragrant tortellini stuffed with bitter almonds and served with lashings of Bergamo black truffle was followed by pork cheek served with crisp pickled vegetables.

As we made our way to the awards ceremony’s seating area on the water’s edge, we passed a buffet of desserts to dip into along the way: fruit kebabs, pistachio cream with coffee jelly, wild strawberries with balsamic vinegar and ricotta and almond mousse.

At about 11pm the awards ceremony started, with an ebullient hostess from Italian TV. Yachts and chefs, both amateur and professional, were awarded and recognised and around 1am we stumbled back to the boats to return us to our hotel – the magnificent, newly-opened Molino Stucky Hilton on the Guidecca island.

And that night, how could I not dream of water after such a day: Venice’s fairytale canals, sailing on a yacht on the lagoon and, of course, San Pellegrino water that had brought me to this magical place.