Shadow Boxer Brasserie, the new sit-down restaurant to open at TheSheds@1Fox in Newtown

Despite its myriad food, drinks and entertainment offerings, the über-trendy TheSheds@1Fox in Newton has had no ‘proper’ restaurant – until now, that is. Jan and Jay Roode, partners in the massive and constantly surprising TheSheds@1Fox development and originators of Happy Me bubble tea, are behind new restaurant Shadow Boxer Brasserie, their answer to the eating-out gap.

The opening is only in February at a date yet to be announced, but excitement is mounting. Shadow Boxer is in a wondrous space in the 123-year-old structure, with corrugated iron walls and a gigantic blue flaky-painted wooden entrance just two up from the main Sheds entrance. 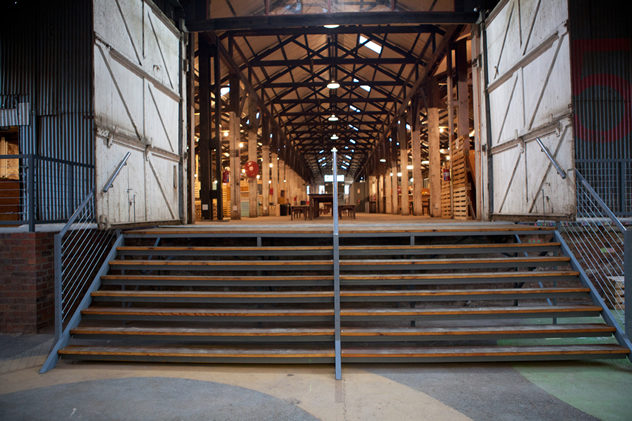 Steps lead up and inside. Nooks on either side of the entrance are being created with comfortable Chesterfield chairs and wooden tables, where guests can enjoy the space with a drink or snack. Further inside, the whole-wall bar is being clad in metal, and there’s a glass section of wall to the left that looks in on the big buzz of The Sheds. From the double-volume height of the original warehouse roof, old and new light fittings are being hung above square metal tables dressed with fine napery. There’s an interim menu from Good Luck Bar next door, while Shadow Boxer’s people finalise their own menu in the final weeks of progress.

Melinda Thompson, who works with the Roodes on menu development, says she’s been working on ‘layered-experience’ food, such as a brunch dish of crispy bacon strips with fresh berries, maple syrup, crème fraîche and deep-fried mint. The lunch dishes are almost ready, as deemed by Melinda and Elmon Mahlanga, the chef with whom she’s been working for many years. What we do know is that one of the desserts will feature chocolate in many different forms. 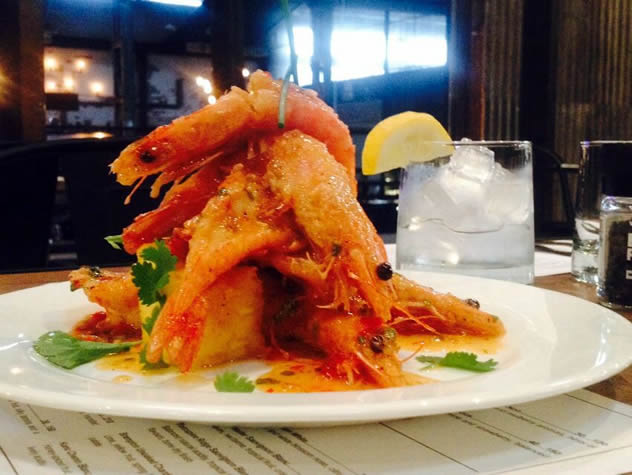 A prawn dish from the Shadow Boxer Brasserie. Photo courtesy of the restaurant.

This focus on interesting textures translates to the drinks, too: Shadow Boxer’s jugs of various boozy delights have additions like unusual jellies and botanicals. The drinks list will also feature wines paired with food, organic labels and options by the glass.

The name, Shadow Boxer, is inspired by the statue by Marco Cianfanelli of a young Nelson Mandela, which stands further up Fox Street outside Chancellor House, where he and Oliver Tambo practised law. TheSheds@1Fox is surrounded by the big banks, so it’s often full of business people on weekdays at lunchtime, and over weekends the walls hold even more buzzing crowds from this ever-developing part of Newtown.

Watch this space for the opening.