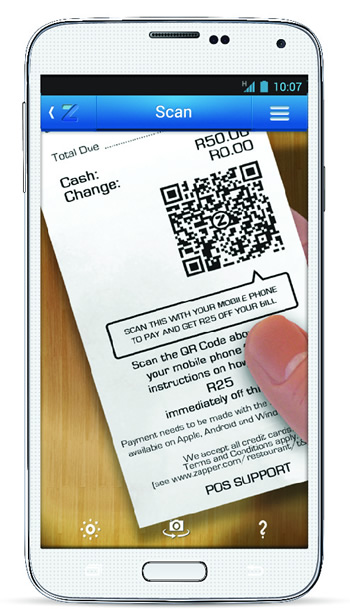 Zapper launched its innovative secure payment and digital marketing app for smartphones in South Africa last year and has since signed more than 2000 merchants.

As the Zapper app utilises mobile phone networks as its primary means of communication, payment processing is not interrupted during load shedding and power outages. This permits restaurants to continue to take payments quickly and efficiently during periods when demand for meals is high as consumers are unable to prepare food at home.

Derek Wiggill, general manager of Zapper in South Africa, says this is just one aspect of the success of the app. “The demand for the app with subsequent growth of the business has been staggering considering we only launched early last year. The technology facilitates a superior consumer payment experience and, more importantly, the app meets the requirements of merchants’ existing controls and procedures.”

Wiggill confirms that because of this phenomenal growth, Zapper will continue to invest in people and grow the staff numbers to support its burgeoning customer base.

Zapper for Restaurants adds unique, transaction-specific QR codes to bills, allowing payment by smartphone. Get the bill, open Zapper, scan the QR code and confirm the pre-populated payment amount. The card is charged, an email receipt is instantly sent, and the restaurateur receives notification of payment.

Faster than using a credit card, Zapper offers greater security as well. Zapper is PCI-DSS compliant at all applicable levels, as the app and related payment flows meet with the various data security standards. These include data storage, messaging, transmission and acquisition criterion. The app has been certified by approved QSAs with debit or credit card details tokenised on the phone, and never transmitted over the network. Multiple cards can be loaded allowing the user to pay for personal bills with their own card and business expenses with their corporate card.

The app facilitates the addition of a tip via the selection of the desired percentage, and also permits splitting the bill between patrons for those going Dutch. Bill and transaction details are e-mailed to the user in PDF format.

Zapper offers numerous advantages including relieving pressure on front-office staff, allowing them to focus on the customer experience. Zapper pricing is extremely competitive when compared with conventional card processing fees. Zapper easily integrates with virtually any POS system and augments the offering to merchants with in-application targeted messaging and vouchers, providing a seamless and paperless way for the consumer to redeem vouchers. Restaurants are easily found by using the App Restaurant Finder, too.

Wiggill confirms the app is being rolled out into the restaurant sector first, with most major restaurant groups now adopting the technology, but will thereafter be rapidly deployed in an array of e-commerce, bill payment and other commercial applications.

Zapper notched up two wins at MTN’s App of the Year competition held in August last year, including the coveted People’s Choice award and Best App for the Microsoft Platform.

The application is already available in the United Kingdom, Ireland, Sweden, Australia, France, Spain, Belgium, the Netherlands, Switzerland and the USA.