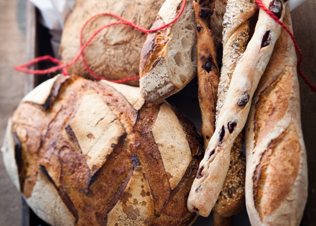 It’s a magical process, bread-making. Like the fairytale of the elves and the shoemakers, bakers around the country wake while the world is still fast asleep to prepare our bread, engaging in that mysterious, alchemical process with yeast. At Oude Bank Bakkerij in Stellenbosch, which took home the 2012 Eat In DStv Food Network Produce Award in the bakery category in March this year, there’s certainly some magic at work. The judges were wowed by baker Fritz Schoon’s rustic artisan bread, from the light rye and sourdough to perfect ciabatta.

So what makes Fritz’s bread so special?

Part of the process is certainly down to ingredients. “We use a wild yeast and the best sea salt we can find (Fritz uses locally-produced Khoisan Sea salt). We put all the water through multiple sets of filters, to make sure that we get the purest water. The flour is stone-milled, which keeps the nutrients in it.”

These nutrients, explains Fritz, make for living, healthy flour, which works beautifully with the yeast. “If I had to by bleached, dead, lifeless flour, you would have to put a whole lot of yeast to get it right.”

Quality, not quantity, is what drives this art. “We’ve had a lot of people asking us to open up new shops, but I don’t want to go forward in that way.” In the future, the baker says he rather wants to work even closer with his miller at Eureka Mills, to better understand the terroir in which the wheat is grown and how seasonality affects it, in order to produce even better quality bread.

The other aspect that sets the bread apart is the wood-fired oven, which involves significantly longer hours and keeps the staff at Oude Bank on their toes.

The process starts at about 11.30am after the last bake for the day has been completed. “We load the oven with wood,” explains Fritz, and they keep feeding it until about 3.30pm. “Then we’ve got this massive bonfire going.” At about 6pm, the apprentice is sent in to rake the coals evenly over the whole surface.

The following morning at 3am, the team returns to remove the ashes, clean inside the oven, and load it with cast-iron pans filled with water to cool the surface. The first dough – sourdough, which is cemented in fridges overnight – is finally ready to go in at around 5.30am. “When you put this cold piece of dough on this hot surface, it just explodes!”

As the oven cools throughout the day, the different breads are cooked at different temperatures. The ciabatta, for instance, cooks in just 16 or 17 minutes, at a whopping 440 degrees Celsius. “You get this soft crumb with this thin crust that’s almost black, but so tasty, so delicious.”

What tips does Fritz have for aspiring bakers? ‘

The best thing that you can do is to do as little as possible.” Fritz frowns on high-speed mixers, which build up a gluten structure, but beat out all the taste and character of the flour. “We mix it lightly, blending it, then folding it with the hands; working very gently, because the dough is alive.” Fritz spends a long time with his staff too, training them in his philosophy of bread, and the purpose of what they’re doing.

The buzzing little bakery and restaurant will be three years old next June, and has come a long way since it first opened. “The original plan was just to build an oven on a wine farm,” reflects Fritz, who studied quantity surveying in Bloemfontein before he caught the bread bug, training under the legendary Marcus Farbinger at Île de Païn in Knysna. After he was persuaded to take the small shop space, the business went from strength to strength. The original four members of staff grew to a compliment of 17 to 20. “The people stuck by us. Even when our service was shocking and we couldn’t keep up with the amount of people.”

Now a whole lot of new things are in the pipeline. Over December, a new pastry area will be going in, and Madri Möller, who trained with Fritz at Île de Païn too, will be dreaming up pastry-related treats, including the croissants that have been left off the menu for some time, thanks to the heat of the oven. Fritz also hopes to be able to reinstate pizza evenings, giving him a chance to indulge his second love, music, and offer local musicians a space to perform.

There’s one more big trick up the baker’s sleeve, though. Next year the baker will be opening an artisan collaborative housed in the corner space in front of the bakery. The new space will house ‘Schoon De Companje’, a collaboration of artisan producers, including cheese, organic fruit and vegetables, boutique wine, a coffee roastery and more.

“My sister has just finished her Masters in meat science,” Fritz explains. She will be producing artisan charcuterie on site with suppliers like Farmer Angus’s pasture-reared lamb and beef, while Fritz’s wife Chanel will be selling her range of artisan ice cream called Fanny Chanel.

“It’s going to be so cool, the people are going to like it so much. And they deserve it, because they’ve been so supportive.”

Want to try Fritz’s award-winning bread for yourself? Head to Oude Bank Bakkerij in Stellenbosch, or try it at one of the restaurants Fritz supplies, including The Loading Bay, The Larder, Camphors at Vergelegen, Tokara Delicatessen, or Postcard Café.

Nominations for the 2013 Eat Out DStv Food Network Produce Awards are now open. You can nominate your favourite producer now.