The best-selling dishes in SA 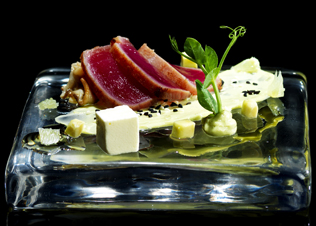 Ever wondered how restaurateurs decide what to put on the menu? Or how on earth they know how much of any one dish to keep in stock? And what are South African’s favourite dishes? We went on a mission to find out.

“A good cut of meat with a killer sauce; a nice piece of fresh fish, also with a sauce; and seafood,” says Franck Dangereux of The Foodbarn in Cape Town. “These are the things people cook less often at home, and are therefore popular at the restaurant.” His top-selling dishes right now are the rack of Karoo lamb, fish of the day and beef fillet.

Named by many of our top chefs today as a mentor, Franck has been in the business quite a while. So have things changed? “In the 90’s in SA we struggled to get people to eat three courses!” he laughs. Back then, wine pairing was also not in vogue. “People would drink the same wine throughout the meal.”

Marthinus Ferreira of DW Eleven-13 in Joburg (no. 7 in Eat Out’s Top 10 for 2011) says the dining public is becoming more food-oriented and are looking for something different. His menu changes weekly, so favourites become less entrenched. “At the moment my guests are ordering the Alaskan crab cocktail, ginger and chilli-infused melon and buffalo mozzarella salad. For mains, confit pork with langoustine macaroni, corn purée, truffle oil and buttered cabbage. For dessert it’s the peanut butter parfait with cherry sorbet.”

George Jardine of Jordan Restaurant, (Eat Out’s no. 8 restaurant for 2011), is more unequivocal in his answer. “Steak,” is the Scot’s firm answer. “Always is and always will be. Regardless of the garnish.” Although the fine dining restaurant’s menu is carefully crafted with an inventive range of options, George always includes steak in some guise on the menu, and throughout the year steak makes up 50-60% of his sales.

“If you’ve got a busy day and you want to make it easy for yourself just put mushrooms with the steak and everyone will order that,” he says cheekily. “People feel comfortable ordering it,” he explains, “You can tempt people away by doing something different – well-informed waiters can help to get people to try new things – but who doesn’t want to go out for lunch and have a nice steak, chips and a glass of red wine?”

The top selling dish at Pretoria’s Kream is also steak (the fillet with bone marrow) and, if anything, the prevalence of steakhouses in Joburg seems to suggest it’s even more popular there.

Veteran restaurateur Philippe Wagenfuhrer opened up Boksburg steakhouse Gray last year to take advantage of the market for meat. He’s also noticed that consumers want ethically sourced meat, and only serves free-range beef, aged for between 18 and 21 days. “The idea is to make the best product for the best value”. In addition to steaks, his burgers made with free-range beef, a homemade bun, roasted banana and coffee salt are a top seller – not least because they’re a bargain at R40. In April Philippe also plans to open up a pop-up trailer outside Gray, selling the very same burgers. “That’s great!” I tell him, already dreaming about the free-range burger. “No, it’s Gray,” quips Philippe.

What about Italian restaurants? It’s pizza, pizza, pizza, according to several Col’Cacchio branches. David Vigliotti of Kloof Street’s newest Italian restaurant, Mitico, says pizza trumps pasta every time. The pastas are also popular, so he keeps them on the menu, but it’s the pizza that has the real Italians raving. Bardelli’s concurs – their top selling dish combines consumers’ love of steak with their love of pizza. The Papa G is topped with fillet marinated in chilli-garlic marinade, portabellini mushrooms, blue cheese and avocado.

The other dish that seems to be streaking ahead in Mzanzi is fish. When there’s whole fish on the menu at Jordan, George notes that it’s very popular.

Grande Provence’s Darren Roberts agrees. “I joke with my butcher that if he could supply me with sushi I could print money,” says Darren. “80-90% of my customers are foreigners at the moment, and South Africa has a reputation for good seafood.” Slow-cooked lamb neck with bobotie butter is also popular at the Franschhoek restaurant. “Probably because it’s certified Karoo lamb. It’s something people can’t get at home.”

Laurent Deslandes, chef at Bizerca Bistro (winner of the best bistro award at last year’s Eat Out DStv Food Network Restaurant Awards) says that at lunchtime almost half of his customers order fish. His salmon with ginger, goat’s cheese and soy sauce is a top-seller at the moment.

Peter Tempelhoff of The Greenhouse (Eat Out’s top restaurant in the country for 2011) pinpoints Asian dishes. “South Africans love Asian food. Not any particular region – just Asian in general,” he explains. Since sushi made its debut fifteen years ago, he’s noticed its popularity swell exponentially. “Our lighter dishes are doing well, particularly because it’s summer.” His salmon trout cured in miso and sesame is one of the more popular dishes. Fish in general also seems to do well at the Cape Town restaurant. Their sustainable seafood tasting menu sells about the same as their chef’s tasting menu.

“I think people are a lot more conscious of what they’re eating. Seafood is lighter, and they want to look good on the beach as well…” Peter jokes. And on the dessert side? Well, that is perhaps less of a surprise. “Chocolate always outsells everything else.”