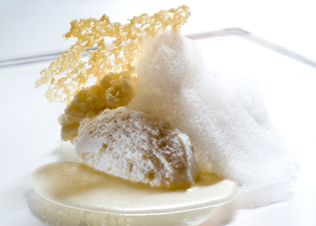 It’s subtle form of communication, the food a chef prepares for a diner. Like those paper cup and string telephones we used to make as kids, or shadows moving behind a screen, the information is muted, telegraphic. Of course, in some restaurants all that’s being communicated is that the griller is over-worked and under-appreciated. In others, it’s a fully-fledged opera.

Eating lunch at Massimo Bottura’s restaurant in Modena this August was the latter. The chef was far away in Asia, the restaurant had been at pains to warn me. But I could hardly visit the province of Emilia and not his restaurant.  And as I dug into the dishes he dreamt up, admiring the iceberg of salted cod floating in a sea broth, the pigeon splattered with blood-red sauce (wondering whether it was designed to resemble roadkill), and scooped up the ‘oops I broke the lemon tart’ off its mock-broken plate, I got a surreal sense that Massimo was somehow present.

The dishes communicated a philosophy, a sense of humour so unique, that they could only have come from the man himself.

This Saturday, Massimo will be in Cape Town for the Eat Out DStv Food Network Conference, and I can hardly wait to meet him – to find out whether my sense of him is correct, or totally off the mark. But for now, here’s an introduction to the chef who brought the world a dish made entirely from parmesan.

The history
It was in 1986, when Bottura was studying law, that his mother told him of an old trattoria on the outskirts of Modena up for sale. He snapped it up and opened it a week later. It was here, with rezdora Lidia Cristoni, that Bottura learnt the basics of his cooking, and spent his days off apprenticing. One day, the famous Alain Ducasse visited the little restaurant and invited Bottura to do a stage (the equivalent of an internship) at Louis XV in Montecarlo.

One year later, in 1995, Bottura opened up Osteria Francescana. The restaurant was a small trattoria, with a tiny kitchen. “We painted the walls, took off the doors. We did it ourselves because there wasn’t any money. And also because it gives you more satisfaction,” explains Bottura in this video.

The restaurant has come a long way since these early days. It won its first Michelin star in 2002, a second in 2006, and the coveted third Michelin star in 2011 – the maximum awarded by the guide. It also currently sits in the number 5 spot on the World’s 50 Best Restaurants, sponsored by S. Pellegrino and Acqua Panna.

This August, the restaurant underwent a further renovation, and the entrance was restored to the position it occupied over 100 years ago, when it operated as an osteria.

When reading about Massimo, one of the most common words that crops up is tradition. He speaks eloquently on the subject of Italy’s culinary heritage, and sources the best his region has to offer – whether it be ensuring that heirloom cherry trees don’t die out, convincing local parmesan-makers to age their cheese for longer, or making his very own balsamic vinegar.

“There is a deep seated sense of tradition, history and above all a loyalty to his Italian (Emilia Romagna) Heritage”, says reigning Chef of the Year, Luke Dale-Roberts of local restaurant, The Test Kitchen. “On the other hand the way he reinterprets dishes and delivers them is surprising and enlightening.”

Ironically, these methods have drawn criticism from some who see him as destroying a culinary heritage. “It is as if Italian food is not allowed to evolve,” said Bottura in an interview with BBC Food around notions of authenticity in Italian food. Others, of course, see his work as invaluable. Tradition for Bottura is all about innovation; his contemporary explorations are about finding the new in the old.

On art
“The way the artist layers a painting is the same as the way I approach food,” Massimo told Eat Out editor Abigail Donnelly when she met him last year. Bottura’s wife, Lara Gilmore, is a curator, so perhaps it’s logical that the chef sees art as his culinary muse. Indeed, Bottura has taken inspiration from Fluxus artist Joseph Beuys, and his walls feature works by the likes of Olafur Eliasson, Matthew Barney and Alighiero Boetti.

On laughter
Bottura’s taste in art also points to a sense of humour. The word is that some of Bottura’s own collection will soon appear in the restaurant: Maurizio Cattelan’s Tourists (three stuffed Venetian pigeons), Jonathan Borofsky’s Half a Sailboat Painting (literally half a painting) and Gavin Turk’s Bin Bag. A sense of humour? I definitely think so.

So there you have it: an intensely philosophical chef and a serious mind, focused on ethical issues but harbouring a wicked sense of humour. Have I captured the essence of the man? We’ll have to wait for Saturday to find out.

Do you have a question for Massimo? Tweet us at @Eat_Out and use the hashtag #EatOutConference to let us know what you’d like us to ask him on the day. Want to be there on the day? Buy your tickets here.