The thing about Tasha’s 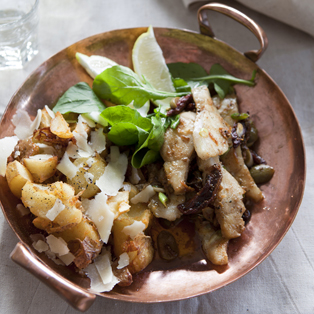 Recently, foodie frequenters of the Twittersphere will have noticed a conspicuous number of hashtags pertaining to Tashas (i.e. #tashas). This is because one of Johannesburg’s favourite café franchises has finally branched out to the Mother City, bringing with it cutting-edge, ogle-worthy décor (think bell-jar lampshades and cutlery chandeliers) and scrumptious, made-from-scratch fare. Eat Out spoke to the (very busy) woman behind the brand, and found out that the franchises needn’t necessarily be formulaic.

Natasha Sideris, woman behind the marvel, is a hard woman to pin down for an interview. Which shouldn’t come as much of a surprise since she’s actively involved in each of her eight eponymous cafés dotted around Johannesburg, Pretoria, Durban and now, Cape Town. When we finally catch up with her, she’s just finished visiting her Brooklyn branch, making sure that everything’s running as it should, which in Tasha’s terms, mean perfectly.

‘Every three or four weeks I do a tour of all franchises, meeting the managers of the stores,’ says Tasha of her hands-on approach. ‘I might go into the office once a week, but the rest of the time I spend at the restaurants, checking up on everything.’

Tasha first made her foray into the food industry 17 years ago, while studying psychology at the University of the Witwatersrand. ‘My dad opened a branch of The Fishmonger in Rivonia, so I helped him out at the restaurant in between studying,’ she says. ‘I fell in love with the business, and taught myself everything from cooking to managing the front of house.’

A decade later, Tasha decided to forge ahead under her own steam and address a gap in Joburg’s dining market. ‘At that stage, Johannesburg either offered formal restaurants or traditional franchised coffee shops,’ she explains, ‘No-one was offering café dining in a beautiful environment, where innovative, delicious food was made fresh to order.’

The graduation from a single café in Atholl Square to cross-country restaurant chain happened, like many things, gradually, then suddenly. Two years after opening the mother ship, Tasha converted her Nino’s restaurant in Bedfordview into a Tasha’s, before Famous Brands approached her a year later with the proposition of turning the business into a franchise.

Far from churning out carbon copies of the original, however, Tasha has made the decision that each branch should be assessed on its own unique setting before being given its own distinct identity in terms of décor, food and mood.

At the Brooklyn branch, for example, Tasha took her predominantly Afrikaans clientele into consideration before compiling a menu that features traditional favourites with a modern spin: cranberry bobotie, cinnamonny pumpkin fritters, sticky apricot ribs and gourmet boerewors rolls. At Melrose Arch, Tasha evaluated her affluent patronage and decided to incorporate a salmon and champagne bar into the eatery. And, faced with the cosmopolitan melting pot that is Rosebank, she commissioned a fine artist from New York to make a stunning centrepiece of hanging books and created a similarly Yankified bill of fare including cheese dogs, burgers and bagels.

And the newest, much-discussed Tasha’s in Cape Town’s Constantia Village? What’s its USP, as they say in business speak? ‘Constantia is known as the leafy suburb and has quite a French feel. In terms of the restaurant’s colour palette, it’s quite French, with teal trusses and a paper installation of cut-out sage leaves,’ she says. ‘Since it’s set in the winelands, there’s a big focus on fresh ingredients, so we’ll be serving food such as French onion soup, crayfish sandwiches, and plenty of dishes with peas and legumes.’ Staying with the French theme, Tasha says patrons will also be able to treat themselves to fresh bakes, including quiches, petits-fours and macaroons.

Asked how she remains inspired, Tasha answers that she spends at least one day in the week in the kitchen, developing recipes. ‘I do a lot of research,’ she continues. ‘I’ve probably got a collection of about 2 000 cookbooks and magazines. I subscribe to every food magazine, internationally and locally, and I buy every cookbook that comes out. And I travel a lot. I’m actually planning on going abroad again quite soon to London, France and Greece. It’s always great to see what’s happening in the world.’

We can’t wait to see what wonderful, whimsical ideas Tasha will bring back from her next overseas sojourn.