Great food we have the British to thank for 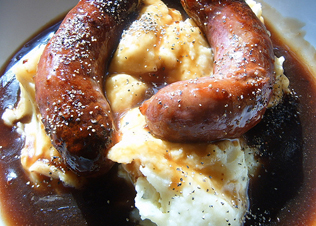 When it comes to hearty carbs, fry-ups, and baking with loads of butter, no nation does it quite like the British. (Eat Out’s Chef of the Year, ex-pat Luke Dale-Roberts, cooks with a little more finesse, however.) In celebration of London’s hosting of the 2012 Olympic Games, we present 10 food specialities for which we can thank the United Kingdom. God save the queen.

Bangers and mash
Due to their tendency to explode in war times when they were puffed up with water, pork sausages are commonly referred to as bangers, especially when served with mashed potatoes. Caramelised pork-anything with potato-anything is a win-win in our book. Much obliged.

Chicken tikka masala
Modern British cuisine is known for assimilating aspects of immigrant cultures, most notably in the Anglo-Indian curry dish of chicken tikka masala. Roasted chicken chunks are covered in a spicy, creamy sauce, supposedly to satisfy the desire of the Brits to smother everything in gravy. (No argument here.) This curry is widely considered as the most popular dish in the UK and has been called ‘a true British national dish’ by the foreign secretary. Here’s where to find some more Asian fusion food across South Africa.

Crumpets
Thicker, spongier, mini versions of pancakes, crumpets are brilliant when topped with butter, cream, jam or syrup. We also love that the term applies to someone sexy, but in a sweetly non-aggressive English way.

Fish and chips with mushy peas
You can’t really get more British than hot battered fish and vinegary chips wrapped in a piece of newsprint. In Scotland they deep-fry Mars Bars, hamburgers and pizza to hasten the coronary. Read Abigail’s pick of where to get the best fish and chips in CT.

Full English breakfast
A traditional full English breakfast, with the requisite bacon, eggs, sausages, fried tomatoes, mushrooms, baked beans and toast, can cure any hangover. Which is just as well, really. Here’s our editor’s pick of where to get the best breakfasts in South Africa.

Gravy
Gravy from an Ah! Bisto box is an English essential when within dousing distance of any meat whatsoever. Though proper onion gravy (made with stock and a bit of flour) is the ideal, served with abovementioned bangers, roast beef and pretty much anything potato-related.

Pimm’s No. 1
This brand of British-style ‘fruit cups’ is gin-based and tea-coloured. It has a subtle flavour of spices and citrus, and is often paired with lemonade and sliced fruit such as cherries or cucumber. (Lawn tennis optional.) Learn more about other drinks in our A-Z of liqueurs.

Scones with raspberry jam and clotted cream
One of the staples of the English high tea, scones are basically a vehicle for butter, clotted cream and good jam. But when baked just right they are light, golden perfection with a cuppa. Next time you bake scones, top them with Jenny’s Clotted Cream, the winner of the dairy category at the 2012 Eat In DStv Food Network Produce Awards. (Buy it at any Melissa’s store.)

Yorkshire puddings
Originally used as a cheap way to extend a roast (much like throwing another potato into the potjie), Yorkshire puddings can be traced back to 18th Century England. A proper pudding has to be at least 4 inches tall, but I don’t think anyone presented with a plate of these golden batter balls would have much to say on this point. Apart from ‘nom’, that is.