Imagine going about your business selling fish and chips on a weekday afternoon and the president casually strolls into your shop? Well, for one of Cape Town’s oldest (and, arguably, best) fish-and-chips shops, that’s exactly what happened. 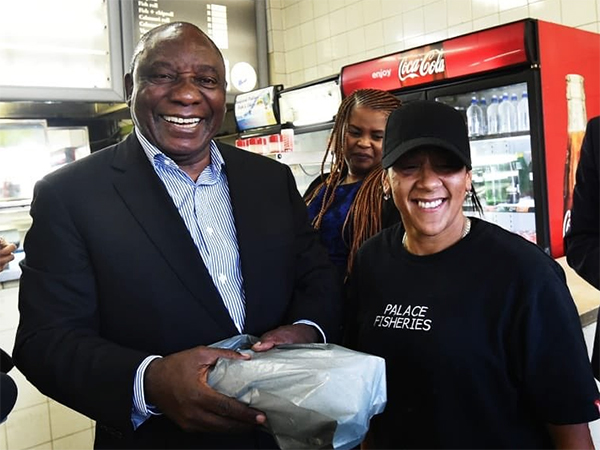 South African president Cyril Ramaphosa is in the Mother City to deliver the State of the Nation Address (SONA) taking place later today (Thursday, 20 June 2019), and attend to other official presidential matters – including the ESKOM meeting he attended just before deciding to make his way to Palace Fisheries in Salt River for a lunch of fish and chips on Tuesday.

Palace Fisheries was taken by complete surprise – both by his visit and how “nice and funny” he was, says manager Angelique Ferreira. The 63-year-old fishery has even renamed its popular hake-and-chips parcel for R59.90 the ‘Ramaphosa Parcel’ in honour of the president.

Fish and chips with the President pic.twitter.com/jbXsuwbIUv

Just when you think you have the president’s favourite SONA spots all figured out – like that time early last year when he took a morning walk on Cape Town’s popular Sea Point Promenade – he pleasantly surprises us.

We can’t wait to see where the president pops up next.