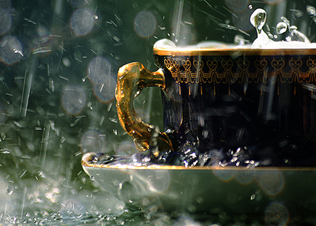 Tea is shaking off its dusty reputation and donning a brand new image, vying for the spot of the world’s hippest hot beverage. Will tea ever unseat coffee as the top hot beverage? Perhaps not today, but definitely watch this space. A Global Strategic Business Report predicts that despite its relative smaller market size and low consumption levels, tea is slated to score over coffee in the long run in volume terms, due to its economical pricing, new flavours and “healthy” brand value.

What sparked the trend?

Alain de Assis Rosa is the director of Doubleshot Coffee and Tea blenders,  one of the few loose leaf tea blenders in the country and self-identified “tea nut”. He says the rebirth of tea is being driven by tea trends in North America and Europe.

“South Africans have an English tea culture, which is kind of a mass hot tea culture. Full leaf tea has not really ever been a South African paradigm. But if you go to France or Portugal, it’s very familiar. When I started in the tea business about a decade ago, most people I encountered had very little or no exposure to large leaf tea. It’s still in its infancy, but now I come across people who want an ah li Shan mountain oolong. Back then, almost no one had even heard of oolong.”

George Jage, founder and director of World Tea Expo agrees that tea is on the upswing in North America. He says the American war on fizzy drinks and the availability of premium tea products, as well as the slow food movement and continued research on the health benefits of tea, all play a part in the uptake of tea.

In South Africa, tea is a $400m industry and expected to continue on its upward journey. This is on par with both the American and European markets, says Swaady Martin-Leke, the entrepreneur extraordinaire behind Africa’s first luxury tea brand, Yswara. Swaady says a growing African middle class means there’s a demand for better quality and luxury products – including tea. If anyone should know, it’s the owner of the business that sells loose tea leaves containing 22-carat edible gold petals.

Ilesh Gopal is the owner of The Tea and Coffee Emporium in Johannesburg. Since opening his business eight years ago, he has been keeping a close eye on the local tea market. “When we started, we struggled with tea, but there has been an increase in both tea and coffee consumption locally,” he says.

The ritual associated with making tea is almost as appealing as the drink itself. According to Swaady, the act of making a cup of tea is a way to forget about the demands of modern life and indulge in a little me time, “Tea is a soothing drink because of the way it is drunk. While both tea and coffee contain caffeine, people consume coffee to keep them going. You can’t rush tea.”

Alain agrees that the ritual of preparing tea is extremely soothing: “Tea is refreshing, leaves you feeling great and cannot really be overdone. There is something enchanting about taking a moment of time out to prepare a perfect oolong or Japanese tea. To me, tea is often a moment of tranquillity.”

According to Richard Churches, co-owner of Contessa Tea Connoisseur, there is also a social element to tea, which is why patrons of all age groups frequent his tea-stablishment. Richard says the conversations that take place over a cup of good tea are often the biggest drawing card for his patrons.

Like the rest of the world, South Africans are also becoming more health conscious, which adds to the appeal of tea. Tea’s cancer-fighting antioxidants and weight management benefits have long been admired.

“This century is about image and age. People want to remain young and look good, which is why tea is becoming more popular,” Swaady says.

How to choose your tea leaves

Few people know that black, green, white and oolong teas all originate from the same plant species. How the tea ends up depends largely on the degree of fermentation or oxidation after being picked. Deciding which tea is best is a matter of experimentation.

Teas are manufactured in many countries around the world. The Yswara range is a proudly African collection of teas from Malawi, Kenya and Rwanda, while Ilesh’s collection consists mostly of teas from Sri Lanka (formerly known as Ceylon).

Swaady draws parallels between the production of tea and the production of wine. A tea might come from a certain area in a certain country, but the terroir and altitude of a tea farm influences the taste of the tea. Just like a wine lover, a tea connoisseur will be able to pick up the subtle differences in tastes after a while.

Alain’s advice to tea newbies is to explore: “There really is something for everyone in tea. It’s a case of being exposed to the good stuff. Good tea is like good wine, coffee or whisky. There’s a myriad of complex flavours and the scope to explore is mind-boggling!”

In addition to experimenting with different teas, Ilesh warns against letting others shape your opinion of tea. “The important thing to remember is not to be caught up what people say. Choose something you like and make it the way you like it. Taste different teas, make an event of it, sit with family and enjoy!”

To enjoy the delights of loose leaf teas, you’ll need to invest in a teapot and a strainer. Tea can be enjoyed in its base form, for example green or black tea, or blended with other ingredients. Be warned, though, blending tea is not something a tea novice should try at home.

“First you need to be familiar with the tools and techniques. You can begin with rudimentary equipment. More importantly, you need a comprehensive knowledge of the ingredients and types of tea. Then you need to match leaf grades with ingredient cuts, and you need to then understand brewing times and temperatures in order to ensure that it all matches up. That’s the beginning. Lastly you need flair and lot and lots of trials,” Alain says. If this sounds like too much effort, you can simply buy tea blends from a variety of speciality shops.

The key to preparing a good pot of tea lies in the temperature of the water. As a rule of thumb, Ilesh recommends boiling your kettle and letting it stand for at least two minutes before pouring it over the tea. Tea should steep for two to three minutes before serving.

Swaady says true tea lovers take their tea without sugar or milk and simply enjoy the natural flavours of the tea.