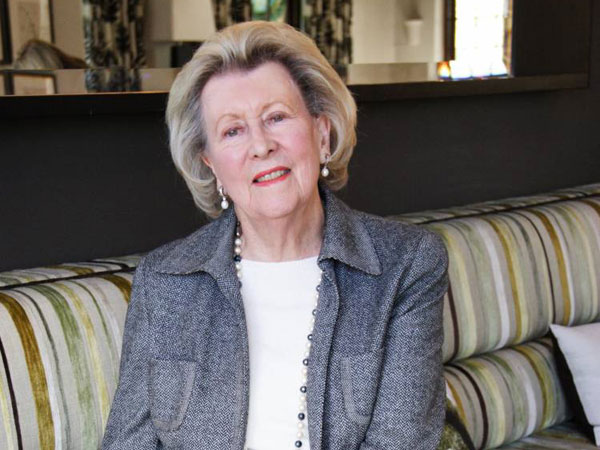 Tributes have poured in for legendary hotelier Liz McGrath, who passed away over the weekend after a short illness.

Liz ran three hotels as part of The Collection by Liz McGrath: The Plettenberg, The Marine in Hermanus and The Cellars-Hohenort in Constantia, Cape Town. She had begun working in hotels after the sudden death of her husband Gerald. Her first hotel, The Plettenberg opened in 1988, and was invited to join the Relais & Châteaux group just two and a half years later.

Four years later, she purchased Cellars-Hohenort in Constantia, famously saying: “I didn’t mean to buy it. The Plettenberg was doing well, but I think I needed another challenge, and of course I fell in love with The Cellars-Hohenort property and its wonderful setting on the slopes of Table Mountain.” She also purchased the Hohenort Manor House when it came on the market a year later, reuniting the two historic 17th century buildings.

Eat Out editor Abigail Donnelly recalled the last conversation she had with Liz, whom she affectionately called Mrs M. “Towards the end of last year just before the awards, she called me to apologise that she was ill and, for the first-time ever, couldn’t attend the Relais & Châteaux conference in Paris, so she had asked Peter Tempelhoff to attend on her behalf. That was what she was like: always thinking of others first and taking the time to make a personal phone call. She was an elegant inspiration to the hospitality industry; she followed her dreams and was full of charm and generosity. What a privilege is was to have known her.”

Executive chef for the group, Peter Tempelhoff, paid tribute to Mrs M: “I have been very blessed to have spent seven years with Mrs M. She played a large role in my career and I will really miss our chats about food, chefs and the industry. She spent many years eating in all the three-michelin-starred restaurants in France when her husband was still alive, so you could imagine these chats were full of vivid recollections of these dinners and lunches, which really were inspiring to listen to. My only wish was that I had started working for her sooner.

“One thing that really stood out about Mrs M was her amazing memory and her eye for detail; she noticed the smallest things! One example of this was a couple of years ago when she asked for the vase in room 9 at the Marine to be moved to room 17 at the Plettenberg as “it would work better with the curtains”! What makes this quite amazing is that no two rooms are decorated the same throughout The Collection; she remembered the details of each of her 150 rooms with amazing accuracy.

“She was the same with her staff and with food: she remembered minute details and important facts about all of her staff as well as subtle tastes and plating technique changes of the food in all her five restaurants – it really was astounding. This is one of the attributes that made Mrs McGrath so successful, loved and respected throughout the industry and the world.”

Eat Out also received tributes from a number of chefs and restaurateurs who worked with her.

Michelin-starred French chef, Jean-Christophe Novelli, who worked with Mrs M left this tribute. “Liz was at first a remarkable business partner; a very special adorable lady, a memorable and powerful presence, a full-time inspirational character and rapidly a very close friend/foster mum, for sure a universal legend, the perfect human example. Even so expected, it’s still very sad news.”

Gerald van der Walt, chef at Top 10 restaurant The Tasting Room at Le Quartier Français, who formerly worked with Peter Tempelhoff at The Greenhouse, said, “I have many fond memories of Mrs M. She was a great woman with loads of passion; she was very empathetic and caring, but above all else, always elegant. It’s thanks to her that I’m in such a fortunate position: she gave me wonderful opportunities, great advice and guidance; and any success that follows is partly due to her. I remember cooking for her daughter’s birthday party in Cornwall a few years back. I had been entrusted to cook a dinner for 120 people, their friends and family (and during my time spent there I felt as if I was part of the family). Instead of just relaxing and having fun with everyone else, Mrs M was there, alongside me in the kitchen, helping prepare the massive meal.

“In the mornings she would walk in, I’d be busy plugging away and she’d ask if I had had a coffee. I would say yes, she would then ask what type. After my pointing to the jar of instant, she would reply, “That won’t do, young man,” and she would make me a cup of filter – every morning, without fail.

“She cared for people, had a great heart, and she is one of those people we all hoped would live forever, but alas, she will be sorely missed by a great number of people.”

George Jardine, currently head chef at Top 10 restaurant Jordan Restaurant, first moved to Cape Town in 1997 to open the award-winning restaurant Novelli at The Cellars-Hohenort. He told us, “My memories of working with Mrs McGrath are full of important lessons that I learnt from her. We were family members – more than employees, regardless of your position or status. She taught me to think bigger and push myself to the limit time and time again; the importance of doing things correctly; and the importance of a sense style. She was such a gracious lady, who was so full of life and a desire to lift everybody up.

“I have worked in many countries, with many great people, but what Mrs McGrath created was more than a collection of properties: she created a collection of many individuals who are now some of our most successful industry personalities.

“I will always remember the lessons from my mentor… Thankfully our relationship continued after I left The Cellars: she dined with me at Jardine and enjoyed many lunches on the stoep at Jordan. I join many others in celebrating a wonderful person; I am glad I met her. Rest in peace, Mrs M.”

Mrs McGrath actually introduced George to his wife, Louise, in November 1997 at the launch of Novelli. Louise told us, “I worked for SOS Children’s Villages and contacted her regarding employment opportunities for some of the orphaned youth, who just returned from studying hospitality. She was, as always, open to new ideas (and challenges), and employed two girls immediately. She trusted our youth enough to employ them, which opened so many doors for other young people. She really invested a lot of time and care into them and both of them worked for her for over 10 years. She was one of our first guests at Jardine and Jordan Restaurant, and she was always very interested in our family and business, and in our opinion about her new ventures and projects.”

Susan Huxter, owner of Le Quartier Français, shared the following tribute: “Mrs M was a true inspiration; she was always gracious and passionate about the business and high standards. She was always happy to share knowledge and experiences and embraced the new digital world. We will miss her presence in the industry and I will miss the wonderful talks about food, travel and families, all of which were so important to her.”