Under the Tuscan tum 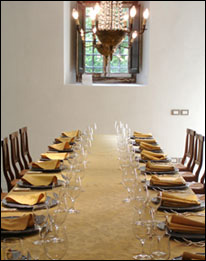 A happy band of about 16 foodie travellers from Cape Town, Dubai and Turkey left Venice early on Monday morning, July 2, to whizz off to Tuscany for a night. And what we experienced in a day-and-a-half, most people wouldn’t see in a week!

Drinking in the view

Arriving at the Florence train station at about noon, we were whisked away to the Nipozzano Wine Estate by Marchesi de Frescobaldi. Owned by the Frescobaldi family, they have been producing wine for 700 years! One of the oldest wine producers in the whole of Europe, they have 1000 hectares of vineyards and nine estates. By no means a small enterprise, they bottle 7 million bottles of wine annually – and we were lucky enough to have a taste of some of the (pressed) fruits of their labours.

As we arrived, the scenery simply took our breath away: neverending views of undulating hills were everything you expect from this serene part of the world. We went up to lunch, served in a quiet courtyard, and had the opportunity to taste three of their wines with heavenly food. A very successful way of doing a tasting while enjoying a buffet lunch heaving with prosciutto and melon, chunky leek quiche, gorgeous roast chicken with rosemary potatoes and crunchy, fresh salads.

The abundance of excellent, seasonal produce really means that every taste, every dish, is simply packed with pure flavour. A nice touch was an individual small olive oil bowl next to each person’s plate, so you could dip your bread, and mix the oil with just the right amount of balsamic vinegar for your taste. Their Laudemio olive oil is green, zingy and one can devour far too much bread with it!

We were hosted by Giacomo Fani, PR exec of Frescobaldi, who entertained us with his vibrant energy, passion and knowledge of the wines, not to mention his naughty laugh! Everyone was clamouring for his attention and I think he must have been quite exhausted after our group left!

First up was the white wine, Castello di Pomino Bianco – a crisp and fruity white, made mainly of the Chardonnay varietal, with notes of pear and apple. Next up: the Nipozzano Chianti Rufina, made up of 90% Sangiovese. Light and packed with plum and berry flavours, this was an ideal accompaniment to the food, and perfect for lunchtime too. Last up was their Bordeaux blend, the Brunello di Montalcino. Quite heavy after the previous wines, it consists mainly of Cabernet Sauvignon, with some Merlot and Pinot Noir in smaller quantities.

The Chianti was declared the favourite of the day – very drinkable and suitably fruity. Luckily we had the opportunity to buy some wines to take home too. And I got a marvellous bottle of their Grappa for my fiancé, languishing in Cape Town and getting sms-es from me about how marvellous all the food and wine was!

After lunch we took a stroll up to the main castle building (did I mention the Frescobaldi family owns nine castles in Italy?) and into the cellars where we saw ancient bottles of wine – as old as 1864. Although, unfortunately, we couldn’t taste those. With everyone in a jolly and relaxed mood, we poked about the cellars for a while, marvelling at ancient and massive bottles, before returning to ground level for some fresh air. The wind blowing in the cypress trees made the moment truly magical – reinforcing those Tuscan clichés that are simply so marvellously true!

Enjoying a well-deserved post lunch snooze on the bus, punctuated by glimpses of fields of sunflowers, we arrived at our stop for the night: Villa Panna. Situated in the town of Panna, the Panna estate became part of the Medici estate in 1564 is now owned by the San Pellegrino company. Situated next door, is the factory for Acqua Panna water, the still water that is bottled straight from the mountain source. Before our tour of the factory the following morning, there would be many gastronomic marvels to contend with! Set among acres of rolling lands, the Villa Panna has been sensitively restored, with accents of the modern, blending seamlessly with antique pieces.

Dinner that night was another gastronomic affair, with chef Michele Bosco of the restaurant Castello Mediceo di Cafaggiolo impressing us with his flair. From glasses of perfectly chilled prosecco on the lawn with nibbles of salami and chourizo, to al dente pasta with the simplest fresh tomato sauce and stuffed veal roll for mains, the food was out of this world. Finishing off a perfect day with a grappa in the garden next to the fountain (with its lion featuring on the Acqua Panna label), Tuscany managed to steal our hearts.

The Tuesday morning, we set of to the Acqua Panna factory next door. Donning clinical white coats and hair nets, as well as safety shoes, we went for a suprisingly entertaining tour of this factory where Acqua Panna is bottled straight from the mountain source. The water was already popular in the time of the Medicis and in 1860, the first mineral water plant was established there.

The current plant is very modern, and on our tour we watched everything from bottling to labelling, sorting and quality control happening with state of the art machinery. And of course we enjoyed some refreshing Acqua Panna water after the hour-long walk through the different factory areas. Acqua Panna is a very delicate water, as it has quite a low mineral content.

After another heaving buffet lunch, consisting of bulgur wheat salad, delicious melon and prosciutto, bresaola with rocket, pinenuts and Parmesan, a myriad cheeses and beautiful marinated artichokes, we decided to rename the San Pellegrino Cooking Cup to the San Pellegrino Eating Cup – such was the gastronomic feast of the trip! That afternoon we had a few hours free in the fascincating city of Florence to do a teeny bit of sightseeing before boarding the train to Milan, where we would spend the next two days.

Read all about water, wining and dining in the design centre that is Milan, in our next instalment of the Italian trip Lisa experienced with San Pellegrino.