Where chefs eat on their night off 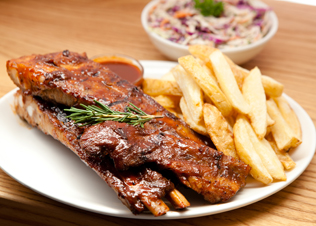 It’s always faintly surprising to see a racing car driver at the wheel of Jeremy Clarkson’s reasonably priced car, or a famous model snapped whilst shopping without make-up and wearing a baggy tracksuit. But in a sense, it stands to reason. On our days off, the last thing any of us want to do is anything that reminds us of work. What, we wondered, do chefs do on their day off? Do they put their feet up at home and order a curry? Or do they head out for a meal?

“I prefer to go out, I like to see what the other chefs are offering and learn from them,” says Raymond Kokota, head chef at Philippe Wagenfuhrer’s new enterprise, Gray Restaurant in Boksburg. His favourite spot? One of our nominees, Roots at Forum Homini.

Gina Neilson of 9th Avenue Bistro is less enamoured of fine dining on her nights off. “You don’t really want to see your customers on a night out, or have to schmooze,” she explains. She heads to neighbourhood restaurants, with home style cooking on her night off.

“We eat out quite a lot of the time, but we also love two minute noodles and toast,” says Vanessa Marx of Cape Town bistro, Dear Me.

Want to know their secrets? Here’s where the chefs in your town head for a great meal:

“At home on the couch, with a piece of toast!” is Thomas Barker’s first answer. The owner of Parkmore restaurant Thomas Maxwell Bistro heads to the Radisson Blu with last year’s Eat Out chef of the year, David Higgs, for special occasions. Piping in from the background, chef Iaian Cuthbertson, meanwhile, says he heads to Wombles.

As for David Higgs? He heads to HQ. The Sandton steakhouse can also count one of our nominees, DW Eleven-13’s Marthinus Ferreira, as a fan. Marthinus says he is also a regular at The Local Grill, Yamato for sushi and Tasha’s.

Fortunato Mazzone of Ritrovo in Pretoria is known for his authentic Italian food. “For a quick bite I love to get a schwarma from Anat in Pretoria or Mi Vami if I’m in Joburg.” Forti, as he’s affectionately known by fans, says he also loves Matsuya in Pretoria, but his all time favourite is Byzance in Joburg. “It is my kind of food prepared by a chef who knows his stuff and has an imagination. My wife and kids and all my friends love it too. If you eat there ask the owner for Forti’s special menu,” he quips.

Paul Sheppard of Mount Edgecombe bistro, Marco Paulo also doesn’t have snobby eating habits.
“Sunday nights are normally when I’m off so I tend to cook at home for friends. I tend to eat at funny times in the week so places that are open all day are useful. I like Goudens in Umbilo for biryani. It has the feel of a workers’ canteen, which is what you want with good curry. You won’t spend more than fifty bucks.”
He also heads to Bellevue Cafe for Saturday brekkie or The Corner Cafe  in Glenwood for coffee and cake or a quick sarmie. “If I’m spoiling myself you’ll find me eating pork followed by chocolate gateau at 9th Avenue Bistro.”

Which passes the buck to: Gina Neilson, of 9th Avenue Bistro. Cake and Satay House in Umbilo is one of their favourites. “It’s a Vietnamese family that cook in their own home and you sit on the veranda and have the most amazing crab curry and home made spring rolls,” says Gina.
She also loves Delfi – a little Greek restaurant with amazing baklava. “They cook what they eat at home,” enthuses Gina.

Heading to Knysna over the holidays? We asked Geoffrey Murray of fine dining spot, Zachary’s, where he likes to eat for quick bite to eat. “Mon Petit Pain,” he tells us. “They make a great bacon and scrambled egg sandwich that’s perfect after an early morning gym session and I think they have the best barista in Knysna. The coffee is always spot on!”
For a special occasion, Geoffrey heads to the Firefly Eating House. “I recently celebrated my birthday there with 25 of my friends and it was a spectacular evening! Dell and Sancha are amazing!”

“I cook at home a lot,” says Eric Bulpitt, one of the two head chefs at our nominee, the Roundhouse. And when he’s tired of cooking? “I often go to La Bruixa; I love their bistro vibe. I also spend a lot of time at Jordan.”

Vanessa can count Massimo of Massimo’s Pizza Club in Hout Bay as one of her fans. In Hout Bay, Massimo heads to Thai Café, and in the city bowl, his favourites are Greenpoint Mexican restaurant El Burro, popular Sea Point bistro La Boheme and Giogio Nava’s take on Southern USA cooking, Down South.

Henry Vigar of Sea Point fine dining restaurant, La Mouette is another of Giorgio Nava’s fans, listing 95 Keerom among his favourite spots for a special occasion. “I enjoy Caffe Milano for brunch, Posticino for pizza and Willoughby’s for sushi.”

Japanese sushi master, Papa San of Takumi, can be found at Theo’s in Mouille Point or Col’Cacchio in the Foreshore on his nights off. And for a special occasion? “Only Tokara Restaurant; chef Richard is a super chef!”

Garth Almazan of Catharina’s heads to neighbouring Steenberg restaurant, Bistro Sixteen 82 for a quick bite to eat. “For a special occasion I like going to Kitima’s”.