Where hipsters go to graze 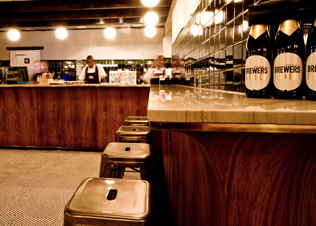 It was sometime in late 2010 when a friend first forwarded me this video. At that stage, the skinny jean-wearing, sailor-tat-covered individuals it described were yet to receive an official title. Since then, the hipster has become as ubiquitous as the jock: a bona fide subcultural group, like the punks of the eighties or the hippies of the sixties, but minus the political subtext. In SA, the wayfarer-wearing contingent has ballooned in recent years and, with it, the crop of hipster restaurants. But which are South Africa’s hippest restaurants? We went on a mission to find out.

“It might take you some time to infiltrate,” editor-in-chief Anelde cautions during our editorial meeting. “Take a newspaper. With holes in it,” she suggests, holding up an imaginary one to hide her face.

Instead, I start my research with some basic crowd-sourcing on Facebook to find out where people have spotted hipsters in their cities. “Spur,” offers one joker (though, thinking about it, if they could tap into the nostalgic/ironic appeal of Coke floats and Chico the Clown, they’d probably corner the market). “Hipsters don’t eat,” says another. Other suggestions include It’s a House (which describes itself as a “bespoke lifestyle” and a “creative concept geared toward creating an environment where people can embody and express their inner creative being”), The Dog’s Bollocks (amazing burgers in an inner city driveway), Corner Café in Craighall Park (concrete floors and visible aircon ducts), and Wolves Café in Illovo (design, art, and killer meatball subs). But what do the hipsters themselves think are the hip spots?

At the Eat Out DStv Food Network Produce Awards and Festival I corner the friendliest-looking hipster I can find, the gent manning the taps at the Everson’s Cider stand. “We’re the first in SA to make a pear cider. And we’re looking at doing single varietal ciders, like a pink lady cider…” my new cider friend tells me. (How hip is that?!) I commend him on his stylish branding and T-shirt. “I can totally see hipsters wearing that,” I muse. His face falls and I realise I’ve made an embarrassing faux pas. I find myself running away, before I manage to ask where he and his ilk go to graze.

“We’ve found hipsters don’t really like being called hipsters,” the folk at Secret Eats advise me. When we attempt to send our photographer to The Power & The Glory to capture some in their natural habitat, our request is declined. The management, it seems, do not want their watering hole to become too ‘mainstream’. This is going to be tougher than I thought.

I have more luck one Friday night at Clarke’s. I’ve heard that in addition to serving delicious burgers, the Cape Town hangout also has a second, secret life, after the dinner service is finished. Sure enough, at 10pm on Friday night, the place is wall-to-wall plaid and woolly hats. I realise with dismay that I’m the only person in the place wearing heels and spend an agonising 10 minutes at the bar waiting for reinforcements to arrive.

“It’s like London in the eighties,” a friend, visiting from Egypt, observes. “Did you see the guy with the tattoos on his face? That’s commitment.” At that point, our conversation is interrupted by a redhead, poking her head through the window next to our table from outside, and shouting in the general direction of the bar. “Nicholas! Nicholas! Nicholas!” she calls. “Which one is Nicholas?” I ask helpfully, seeing an opportunity to infiltrate. “The one with the pineapple hat,” she says, pointing at a guy wearing a tapestry cap, embroidered with images of pineapples. Of course.

After some two weeks of dedicated research – diligently following around pretty boys with gaps down the sides of their vests and tea cosies on their heads – and interviewing men with beards (“it makes it hard to lick an ice cream cone,” one admits, stroking his ginger mane), I’ve learnt a lot.

The first lesson is that despite my social awkwardness, art degree and enthusiasm for artisan ice cream, nobody will ever mistake me for being hip. Secondly, I’ve come up with my own sociological theory: the higher the density of facial hair, the better the coffee – and food – is likely to be. Based on my moustache-mapping system, I also have a tentative geography of the hippest hipster hangouts around South Africa to share:

Head to the city bowl in general, Bree Street and Kloof Street particularly, and Woodstock, to find wearers of indoor hats and a great selection of craft beer.

&Union
The credentials: craft beer HQ, hot dogs and more bloggers than you can shake a stick at.

Aces ‘n Spades
The credentials: technically more club than restaurant, this spot is nevertheless worth a visit, if you want to witness the priceless sight of hipsters dancing. There’s also a shamelessly unfair queuing system and Persian carpets on the dance floor.

Café Frank
The credentials: this place absorbs some of the overflow of Polaroid owners from Jason across the road. It also attracts a small hipster following of its own with fresh juices, communal tables and oversized light bulbs.

The Dog’s Bollocks
The credentials: kickass burgers in some dude’s driveway, surrounded by chintzy lampshades and garden furniture.

Field Office
The credentials: as the name suggests, this space caters to creative types in need of a coffee shop in which to set up their Macbooks. Good coffee.

It’s a House
The credentials: it’s actually designed for freeloaders, um, I mean ‘lancers, with Macbooks to lounge in all day. Think grandma’s furniture with craft beer on tap.

Lion’s Head Bar
The credentials: more craft beer, and it’s almost impossible to find, thanks to the understated signage.

Neighbourgoods Market
The credentials: partly to blame for the hipster movement in Cape Town, this market was championing artisan food way back in ’06.

Orphanage Cocktail Emporium
The credentials: cocktails out of gran’s china teacup, or from a brown paper bag to take that homeless look one step further. The cocktails are pricy, but they really are delicious.

The Handle Bar
The credentials: a ‘bicycle café’ (as if that were a thing!) that manages to reference both bicycles and facial hair in its name. I doff my hat.

The Power & the Glory
The credentials: simply put, this is Hipster HQ. ‘The P and the G’ to those in the know.

Starling and Hero Bicycle Café
The credentials: you can get your single-gear bike oiled while you tuck into home-baked goods.

Truth HQ
The credentials: hipsters run mostly on caffeine (it helps dull the appetite) and this, after all, is the HQ. Steampunk design creates a nice, faux grungy feeling.

Yes, there are hipsters in Durban, despite the heat.

Afro’s
The credentials: a live food truck. Free meals if you’ve got a ‘fro.

I heart market
The credentials: up-cycling, artisan food and second-hand goods on offer the first Saturday of every month.

Unity
The credentials: this buzzing gastropub has farm animals on the logo.

Double Shot
The credentials: single-origin coffees and a sleek interior.

Greenside, Parkhurst and Braamfontein (particularly the Maboneng Precinct)
The credentials: this area seems to hold the greatest concentration of ironic facial hair and redundant eye-wear.

The Good Luck Club
The credentials: it’s owned by the Desmond and the Tutu’s frontman and his wife, and possessed of wallpaper featuring bowtie-wearing cats.

The Office
The credentials: a late-night speakeasy vibe and absolutely no patrons that possess office jobs.

Vuyo’s wors
The credentials: a butchery/eatery. (The slash, after all, is the hippest unit of punctuation. Well, after the ampersand.)

When I asked about it, no less than four people laughed at me. “I don’t think there are any,” says one Pretoria resident. “That’s gonna be a tough one. Lol,” comes another response. After digging (really) deep though, I am happy to report that there are, in fact, several hipster hotspots in Tshwane.

Aroma Gourmet Coffee Roastery
The credentials: order your coffee with a picture of a cat in the foam.

My Darlings Patisserie
The credentials: Cookie Monster cupcakes and a small quantity of nostalgic clutter.

Park Acoustics
The credentials: a monthly outdoor music concert that takes place at the top of Schanskop Hill. There’s a food stall, hipster clothing for sale, and a post box art gallery.

If you are still in doubt, see this handy hipster food flowchart, sent to us by one of our reviewers, Ishay Govender-Ypma. Lastly, there is hope for those suffering from HIPSTER: Hyper Involuntary Panic Stress Tension Elevation. (Thanks to twitter follower Tamara Oberholster for the heads-up.)