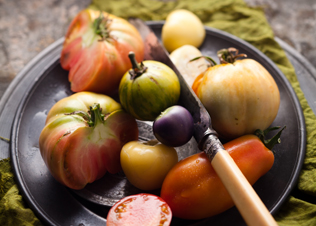 Winner of the earth category at the 2013 Eat Out DStv Food Network Produce Awards, Magic Herbs, Steve Botha’s small organic vegetable, herb and fruit farm in Porterville, has grown over years to become a supplier to many of the country’s Top 10 Restaurants. Growing everything from delicate edible flowers to Jerusalem artichokes, “The Magic Man” impressed the judges with both the quality and sheer range of his fresh produce.

The first thing you notice when you strike up a conversation with Steve is his passion. He lives his work – and not only because when you ask how he is, he answers, “Magic!”. The seeds of the business were germinated about 18 years ago in the back garden of one of the restaurants he was managing at the time. Now located at the foothills of the Olifants River Mountains in Porterville, his self-sustainable organic farming practice supplies over 200 various fresh products year round. Steve jokes, “I am the main peanut on the farm,” but the business also employs 15 full time staff and about ten part-time staff, as well as an administration and dispatch manageress and two drivers.

Steve prides himself on hunting down the strange and unusual, so to supplement his local veggies he imports seeds from Asia, Holland and America. When he first started growing his mini herbs about a decade ago, the word ‘microgreens’ had a mere 11 results on Google. Now Magic Herbs is the biggest seller of microgreens in Western Cape.

Word of mouth was the key to his early growth, Steve reveals. “Initially I was doing only Southern suburbs, then Franck Dangereux (The Foodbarn) started mentioning me to people. And once I sold to Margot (Janse, chef at The Tasting Room and 2012 Chef of the Year) she told everyone.

“Then I grew out of my boots!”

And where did his magical name come from? “I was inspired by the book Good Magic by Marina Medici. In it she describes growing herbs so beautifully. I have always had a herb garden – by standard 2 I was growing my first peas and my mum taught me to make compost. That book is where I learned that you must never use unnatural materials, not even a plastic watering can. I liked the holistic approach.”

Mountain water is used to irrigate the farm, where organic principles are followed. Ludwig’s garden spray and Steve’s homemade chilli ‘consommé’ are spritzed on plants for pest control. Official organic certification bodies are very expensive – they can cost upwards of R35 000 a year – so calling his farm ‘organic’ is a matter of integrity for Steve.

And the list of his autumn produce goes on: spinach, spring onions, Jerusalem artichokes, celeriac, purple bok choy, baby turnips, chives, apple mint and Moroccan mint, seven colours of carrots and white beetroot, which they haven’t had in years. He also grows four kinds of peas together to supply enough tendrils to meet chefs’ demands.

“The saladini and microgreens need to be watered three times a day; five times a day in high summer. So we work hard!” Steve laughs.

Best way to enjoy it

The 2013 Eat Out DStv Food Network Produce Awards judges were particularly impressed with Steve’s tomatoes. The swirls of green and crimson had them snapping pictures on their phones. “Amazing,” was the sole comment scrawled on the judging sheets (alongside top marks). Don’t ever put a tomato in the fridge, though, warns Steve. “That’s the last place it should be! Rather leave them on the window sill.”

His microgreens add subtle flavour as garnishes, while the beautiful leaves, vegetables and fruit should be enjoyed fresh or simply cooked to showcase their natural colours, flavours and textures.

Where to get Magic Herbs