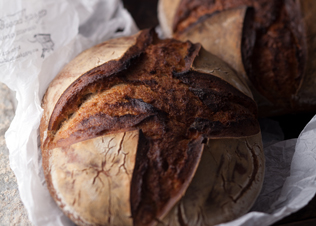 We chat to the winner of the Best Bakery in this year’s Eat Out DStv Food Network Produce Awards to learn about the alchemy behind good bread.

“I come from a family of cooks,” says baker and co-owner of The Bread Gypsy, Pauli Coetsee. “I have always wanted to bake, but a few years ago there were no artisan bakers in the country, so I became a chef.

“Then, three years ago, I did an internship at Île de Païn, came to Pretoria and built the bakery.

“I used to suffer from what I thought was gluten intolerance, but then I realised that it was the bad quality of the wheat in the bread, not the wheat itself. Now I eat my own bread ten times a day and I am absolutely fine.”

Artisan bread from natural flour
So what’s in commercial bread that’s causing the problem? “There are up to 26 preservatives, additives and conditioners in the flour. It just doesn’t digest.”

Pauli explains that commercial bread is processed so fast – less than two hours from beginning to end – and far too much yeast is used to speed up fermentation. She believes this is where the rapidly increasing prevalence of candida overgrowth and wheat/gluten intolerance is stemming from.

At the Bread Gypsy, it’s a slow-paced process. Their shortest fermentation is 18 hours. They call themselves artisan bakers. But what does that term signify exactly?

“Artisan anything means hand-made. For us it refers to an old-world process: gentle mixing, slow fermentation, good baking. It’s like a code of traditional methods.”

To Pauli, good baking means baked in a very hot wood-fired oven. The bakery fires are made in the day and they burn fiercely through the afternoon and into the night. By the time the ash and coals are taken out in the early morning, the heat stored in the walls is enough to bake bread. This method is referred to as indirect firing, as opposed to direct firing in a pizza oven, for example.

In the oven they burn exotic wood only – mostly bluegum. They have a mutually beneficial deal with nearby farms. “We can have the invader wood for free as long as we chop it ourselves. We do use quite a lot of wood!”

Something special happens in these oven conditions to make the crust anti-bacterial, like the loaf’s very own natural preservative, extending the shelf-life and lasting power of the bread. Baking this way also imparts flavour and results in the right chewy texture – all the characteristics of good bread.

“There are no preservatives, so the bread does start losing moisture from the moment it has finished baking. It tastes good for up to a week, though. A lot of clients buy bread only once a week. And it freezes very well,” says Pauli.

The other key is good flour. “We use Eureka Mills stoneground flour; they can supply the volumes we need.” It is literally ground by stone, and milled in a cold process to preserve the wheat germ, fibre, vitamins and enzymes. Conversely, the more aggressive commercial process strips the germ from the flour, which then needs to be fortified afterwards to put nutrients back in.

A baker’s life
“I get up at 2am every day. We start mixing and shaping all loaves by hand and pack them into cloths. The sourdough that has been fermented over night in baskets will be ready and waiting. After we clean the ovens and take the coals out to cool them down, we bake and carry on shaping until 8am, when we send out deliveries. Then we start the prepping process all over again.” After midday, once the staff have left, Pauli will head out to the shop [Lucky Bread Company].

So while Pauli does the baking, her partner Alicea Malan (who used to own Deli on Duncan and work at Tribeca Standard) manages the store. “She’s a really talented chef and our partnership works really well. She’s very creative and passionate about food and life.”

Gypsy caravan
Why The Bread Gypsy? “The name just came to me – I am a gypsy at heart. Bread is quite a humble craft and I wanted an unpretentious name. Also, the original plan was to bake on the farm and then sell bread in gypsy caravans along the road, but our business grew too fast. I still like the idea of mobile shop, though!”

The epibaguette was one of the breads submitted for the Eat Out DStv Food Network Produce Awards judges to taste. Epi bread, which consists of a series of rolls interconnected to look like a stalk of wheat, is popular for picnicking or cocktail parties, as each diner can tear off a roll without needing a knife or ruining the loaf. “The epibaguette is a show stopper; it’s a pretty bread and it shows a little bit of skill.”

How to enjoy it
You can’t blame Pauli for eating bread for almost every meal. “Every morning for breakfast I have a soft-boiled organic egg and a baguette with farm butter and honey. I also like a good slice of rye, usually topped with something that has a little more flavour to contrast with the sharpness of the bread – smoked meats, and salmon. I often I eat things out of the garden, like some tomato and fresh rocket leaves.

“We do also sell bread from the farm; people are welcome to come and see the baking process. And the staff are all wonderful. We’re like one big happy family.”

See all the winners of the Eat Out DStv Produce Awards.