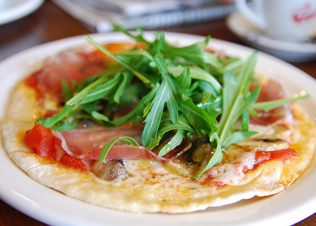 Technically, the inventors of the pizza would probably insist it should be topped with San Marzano tomatoes grown on the slopes of Mount Vesuvius, mozzarella di bufala, hand-torn basil leaves and pretty much nothing else. But the world is a crazy place. I’m fairly sure that the inventors of macaroni and cheese never imagined it being deep-fried, just as the inventor of the McNugget never intended for it to be incorporated into a cocktail, and the butcher behind bacon, thousands of years ago, never foresaw that one day, it would become a soda flavour. Here are 10 ridiculous pizza toppings: from insanely delicious, to just plain insane.

While pineapple and banana are generally considered quite acceptable pizza toppings, the idea of fruit on pizza is somewhat horrifying. Then again, at Massimo’s (now Amici di Massimo’s while Massimo himself is away) in Hout Bay, there’s an olive oil, gorgonzola cheese and sliced pears pizza, and at Toni’s Fully Furnished Pizza Company in Menlo Park, you can get roast pork with caramelised apple and sage on your pizza, both of which actually sound kind of great.

“In Italy, if you put cheese with fish, the police will come to take you away,” Giorgio Nava allegedly declared a few years ago at our restaurant awards. Admittedly, the thought of Pizza Hut Indonesia’s fish and chips pizza, which comes with battered fish cakes and a pile of potato crisps in the middle, is pretty terrifying. But the Thai prawn pizza, with chicken, prawns, cherry tomatoes and fresh coriander, at Carlyle’s on Derry does sound delicious. I’ll allow seafood so long as it’s not battered, and is paired with lovely fresh ingredients instead of a second carb.

3. Actually, potato on pizza, in general.

“I’m always confused by potato on pizza,” muses our content director Anelde. True, it violates the law against double-carbing, but what about Thai beef, coconut milk, cashews and sweet potato at Pizzetta in Durbs? Or potato slices with creamed leeks, garlic, rosemary and feta at Cornuti al Mare? I take it back. Double-carbing is amazing.

I’m putting this on the maybe pile. On the one hand, it’s a fine example of double-carbing, which, as we’ve just learnt, is great. But that’s surely cancelled out by the vegan bit. I feel confused.

Let’s examine the Nutella pizza. I know it sounds amazing, but in my experience, something of this nature often struggles to live up to the exceedingly high expectations conjured by two foods of such unrivalled greatness. I do, however, have higher hopes for Burrata’s cioccolato pizza, made with homemade chocolate and hazelnut spread, banana and treacle sugar. I suspect their pizza dough may just be thin and crisp enough to be a worthy delivery system for the chocolatey-hazelnutty goodness. I’m also open to trying the Baklava scroll pizza from Toni’s, with cinnamon sugar, baklava syrup and ice cream.

Yes, I know. This is also not a pizza. However, I feel it is my duty to inform you that there exists a pizza-flavoured ice cream. It’s made with tomato paste, basil, garlic, tomato concentrate, oregano and fresh dairy cream, but has no cheese, which should come as a relief.

8. Pizza within a pizza

Unearthed in a recipe book dating from 1978, the pizza within a pizza (PWAP) includes parmesan, garlic, sausage, tomato sauce, red onion and oregano kneaded into the dough. Once rolled out, top with tomato sauce, your toppings of choice and, naturally, more cheese.

In the competitive field of stuffed crust pizzas, the award for insanity goes to Pizza Hut for its cheeseburger pizza, boasting twelve mini cheeseburgers embedded in the crust. (They even made a pizza-flavoured perfume for the certifiably insane.) Runner-up prizes for the chain’s hot-dog-stuffed crust pizza and the ‘Double Sensation’ from Singapore, which features two crusts: an inner crust stuffed with cheesy chicken sausage, and an outer crust stuffed with three cheeses. I’m also willing to give an honourable mention to stuffed crust forerunner, the meatball-and-cream-cheese-stuffed-crust pizza.

A triumph of next-level, post-modern thinking. Made with pizza flavoured Doritos, Pringles, crackers and, most horrific of all, pizza-flavoured hummus, the meta pizza is the world’s most pizza-flavoured pizza. Tempted to run screaming from the room? Way ahead of you.