Brought to you by Grana Padano

Italy’s best-known exports might be pizza and pasta, but each region of the boot-shaped country has its own spectacular signature dishes. Here are 11 to add to your bucket list.

Made in Rome, these semolina-based gnocchi are baked with butter. They’re ready when they are gorgeously golden brown on the outside, like this.

These yeasty buns studded with raisins and filled with cream are a popular breakfast in Rome. The name translates to ‘almost husband’, after the tradition of grooms giving them to their fiancées.

Oranges aren’t the first things that spring to mind when planning a pasta dish, but this Florentine recipe, which calls for ravioli to be filled with ricotta and orange zest, is genius. Eat the parcels simply tossed with olive oil.

Zucchini flowers are seldom seen on South African supermarket shelves, but in Italy they add colour to a whole range of inventive dishes. Try them stuffed and fried, or baked into a delicate soufflé laced with Grana Padano, like this one.

These pine-nut-studded cookies are made with almond paste rather than flour, resulting in an almost macaron-like biscuit.

Traditionally made in the Po River valley, this pasta-based pie is filled with beets, spinach, egg, Grana Padano, onion and garlic, before being closed and pricked with a fork.

It’s not just the French who make snails; the Italians serve this inspired version with anchovies, chilli and mint to celebrate the feast of John the Baptist.

The island of Capri not only attracts glamorous individuals with yachts, its residents also know how to make great cake. This chocolate-and-almond cake can be made entirely without flour.

Many South Africans may enjoy their pancakes with cinnamon, sugar and lemon juice, but it’s by no means the only way to savour them. Try smothering them in a rich Grana Padano sauce, like this pretty stack.

This warming dish of pancakes served in broth originates in Abruzzo, where winters can be bitterly cold. It’s important to dust the egg-based pancakes liberally with cheese – Grana Padano works well – to maximise the comforting properties of the dish.

Italy’s answer to doughnuts is usually topped with powdered sugar and filled with custard, cream, jam, or butter and honey. 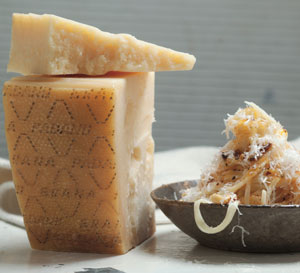 Brought to you by Grana Padano

Grana Padano is a hard, richly flavoured cheese from Northern Italy. It is named for its beautifully grainy texture (la grana), and its origin: Padano or from the Po River Valley. It’s believed to be one of the world’s first hard cheeses, created nearly 900 years ago. Grana Padano is ripened for at least nine months, and fire-branded with the Grana Padano trademark.