20 of the most insane things people have made with Oreos 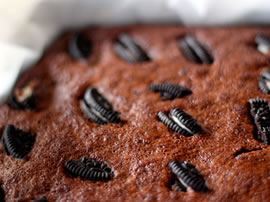 It’s hard to pinpoint when dairy products were first eaten, but evidence of the first butter, yoghurt and cheese consumption dates back some 8 500 years to Turkey. The first noodles appeared some 4 000 years later. Bread – in its modern-day form – probably first appeared around 300 BC, when the first yeast began to be cultivated. It was in 1912, though, that our current journey of culinary innovators begins: the Oreo was invented.

Unlike the other one-dimensional cookies of the time, the Oreo was of a handful of biscuits being sold as a sandwich, with a layer of icing in the centre. In the 103-odd years since this revolution, the human race has worked with this simple cookie to produce every secondary foodstuff imaginable. From gloriously moreish recipes to the downright absurd (see no. 9, Oreo pasta), we decided to honour the inventors. Here are the fruits of our labours, ranked from the most obvious to the most creative.

We have a pretty strict editorial policy here at Eat Out, but we might just cave to doing a special feature if someone were to bring us a plate of these glorious bourbon cookies. Just kidding: we’d never trade a review for free food. Our integrity is far too important to us. Maybe a tweet? (Ed: No tweets. See me in my office. Maybe bring batch of these...)

The number of recipes available online for this delicacy raises questions about the future of the human race. But we are impressed by this one, which offers two different flavours: your classic Oreo truffle made with cream cheese, and a peppermint version flavoured with essence and decorated with crushed candy canes.

Everybody and their cat has made a cheesecake with Oreo crumbs as a base, but we commend the use of Oreos in batter here. You could also go all-out and make a giant Oreo with a cheesecake stuffing.

Points for adding Nutella to the recipe. And just look at that fudge mixture being poured into the tray!

Building on the tradition of sandwiching things, some enterprising individuals began baking Oreos inside other things. Such as chocolate chip cookies. You know, as one does.

This is deeply upsetting.

This is so low down on the list only because of a lack of originality. After all, the Scots have been deep frying everything from Mars Bars to haggis for years. That said, we can report that Hudson’s does an extremely delicious deep-fried Oreo. Eat them piping hot, while the cream inside is still melty – and while you’re still young, to avoid a coronary.

While a combination of alcohol and Oreos does sound inspired, we worry about the texture of any Oreo-based cocktail. Thankfully Rachel Ray uses Oreos only as a garnish. All in favour of replacing the pineapple wedge with a cookie, say ‘aye’.

Like salted caramel, peanut butter is a fairly obvious addition to any dessert item. But points here for presenting it as a trifle.

In the category of easiest to execute, this recipe is an undisputed winner.

Domino’s crossed the Rubicon, marrying sweet and savoury when they came up with this baby. It didn’t exactly garner rave reviews during its limited-edition run, but we commend these scientists for their ability to think outside the box.

“The result was a delicious, unique dessert, perfect for an Italian dinner night!” reveals the blogger. The same person also has a recipe for Nutella hummus on her blog, which gave us an idea: we googled Oreo hummus.

We had hoped that the makers of this festive dip would replace the chickpeas with something else, and simply serve this as a dessert dip. But the recipe does indeed contain chickpeas – along with Oreos, coconut and chocolate sauce, amongst other things. Anyone brave enough to make it and let us know?

The pastel shades in this video are really calming.

Oreos are apparently vegan (in some countries at least). These ones have a coconut milk-based icing filling in between.

We are big fans of this guy’s haircut.

Basically, you mix Oreos into cream cheese and wrap them in puff pastry. It’s unclear whether this is intended as a dessert or a canapé. We’d be fine with either.

No suggestion is offered that this might be satire. In fact, one commenter notes that she does a version with cream cheese.

Henrico Grobbelaar at Equus does a wine butter, George Jardine at Jordan does beautiful herbed butters, but to our knowledge, nobody is serving complimentary bread with Oreo butter. Pity.

Ladies and gentlemen, we have a winner. This recipe uses the biscuit part in the batter for the churro, and the cream as a dipping sauce. The churros are also rolled in the crumbs after frying. How’s that for creativity? We also love this girl’s eye-shadow game.