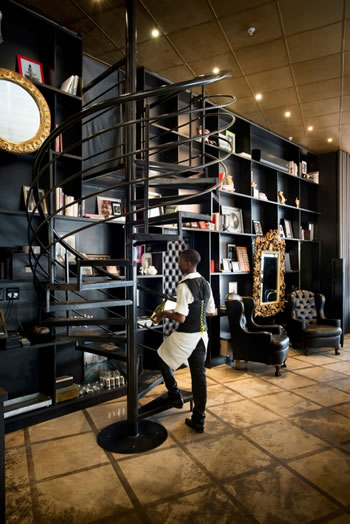 The interior at Harvey’s Restaurant. Photo courtesy of Dook Photography.

In the holiday resort town of Umhlanga, high glamour and hedonism meet at Harvey’s Restaurant, the latest of our contenders for the most stylish restaurant in SA.

Harvey’s Restaurant first opened just three weeks before chef and owner Andrew Draper’s 21st birthday. Three locations and 20 years later, the restaurant has become something of an institution in Durban, continually setting the benchmark for innovative food. Its newest manifestation is in Umhlanga and includes a more casual offering in the form of Harry’s Bar.

Inspired by Andrew’s stint at Canteen in London (owned by Marco Pierre White and Michael Caine) and Sonny’s Kitchen in Barnes, the restaurant serves up food that Andrew describes as ‘epicurious’. The chef works from a classic foundation and adds exotic ingredients and luxurious techniques to create something new – for instance, tempura tiger prawns with avocado-and-coriander mousse and saffron-and-tomato vinaigrette. Evergreen favourites include the black-peppered fillet and lamb bordelaise.

Aiming to evoke a gentleman’s club worthy of the Great Gatsby, Andrew conceptualised and designed the interior, infusing it with his own hedonistic charm. The centrepiece of the double-volume, gold-ceilinged restaurant is a massive custom-made chandelier with 60 lights. As a counterpoint to all this drama, black floor-to-ceiling bookshelves are filled with art and knickknacks from Andrew’s home.

Does Harvey’s Restaurant in Umhlanga have what it takes to win the 2014 Boschendal Style Award? The winner will be announced at the Eat Out Mercedes-Benz Restaurant Awards on Sunday 16 November. (Buy your tickets now) See the other nominees here.