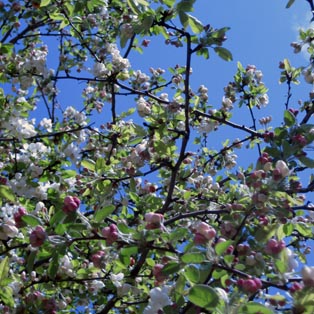 “So” our tame Parisian says, on our first night in Paris, “what would you like to see while you are ‘ere?”

We blink at her; utterly exhausted after a long day of travelling.

“The history,” I summarise, “and we should save for one meal somewhere fabulous.”

We’re here in early spring; in a city swathed in blossom, and overrun with daffodils, shining tulips and bobbing poppies. We are, all three, students – two from Hong Kong and one from South Africa – visiting a fellow student in her home town. Needless to say, we don’t have a large budget; we’ll be sleeping on the floor in her flat, walking kilometres rather than taking the metro, and to begin with, our culinary adventures – in one of the top foodie destinations in the world – will consist of trying to find fast food for under four Euros.

Fortunately, with a tame Parisian in tow, this is less ghastly than it sounds. We walk the wide avenues, beside trees drooping under heavy balls of pink blossom, following the Parisian’s directions. And we do find some gems.

In a little hole in the wall hot dog stand, on one of Paris’s otherwise absurdly expensive islands, we find speciality German style hot dogs, loaded with sauerkraut and spicy mustard. On Rue des Rosiers in the Jewish Quarter, we sample cheese, breads, charcuterie at a seemingly endless array of delis, patisseries and charcuteries. At Restaurant 404 – a Moroccan place on a quiet side street near the Pompidou – we devour pitas oozing with hummus, tzatsiki, and perfect falafels.

Sticky baklava, and piping hot mint tea from the Mosquée de Paris, situated opposite the natural history museum, make a scrumptious afternoon tea, while a thoroughly decadent ice cream at Berthillion’s – the city’s most famous ice cream parlour – serves as a meal in itself. When we’re running really low on fuel, we also eat our way through armloads of baguette – which, even though they’re cheap – explain why our Parisian scorned British bread when she was in England.

The Parisian has not forgotten about my request for fine French cuisine though, and near the end of our trip, having dutifully saved our Euros, she takes us for lunch at Le Procope.

Serving traditional French fare, Le Procope is the city’s oldest café. Founded in 1685, the café was the meeting place of Robespierre, Danton and Marat. It is possible then, that within Le Procope’s regal red walls, the French Revolution was conceived, before the ideas were published in Marat’s printing press just around the corner. Voltaire was another famous customer; allegedly consuming forty cups of coffee a day here. Napoleon Bonaparte was also a patron. According to legend, the famed admiral was once forced to leave his hat behind while he went to find money to pay for his coffee.

I worry, on hearing the café’s provenance, that a similar fate will befall us. “It is expenseeve, yes,” the Parisian tells us, “But for lunch, much cheaper.” (This incidentally, is worth remembering if you’re converting from Rands: at most fine dining establishments in Paris, you can get two set menu courses for lunch for a fraction of the price of a dinner sitting.)

Inside, the café is decked out in a decadent 18th Century style; with red walls, crystal chandeliers and vast, golden mirrors. The waiters too, are a little intimidating. Our own personal specimen could win prizes with his withering look. The look he gives me as I falter through my order in French, discourages my Cantonese friends from even attempting to order their own meals. The Parisian has to rescue us.

We giggle over the Escargots de Bourgogne; which like true tourists, we’ve ordered to start. The white wine, garlic butter sauce is delicious, but I can’t help thinking that the actual snail is like a piece of calamari, which the chef has soundly botched. “Like chewing on an elastic band,” my friend says.

This is classically rich, traditional French food, and I’m very glad we’ve had the Parisian fine dining experience, rude waiter and all. Next time though, I’ll head to the mosque first, for baklava and mint tea. And I think I’ll skip the snails.