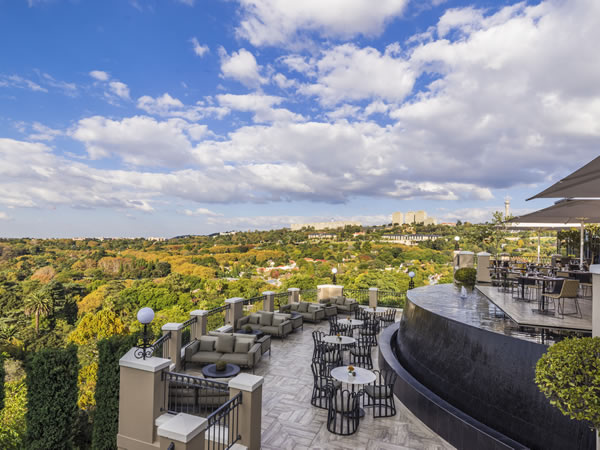 When a food trend flashes up this fast, you can usually trace it back to its original spark. It could have been the charring done by Noma’s René Redzepi; the smokiness of flavours from the Spanish charcoal-burning Jospers that have popped up all over; or perhaps it’s Niklas Ekstedt we can thank, whose flames have been mesmerising us on TV while he constructs exquisite food out of almost any ingredient on different parts of his fires. In South Africa this way of cooking has always been in our blood, in the age-old methods of braai and shis nyama, but open-flame restaurants are catching on fast – like wildfire. Here are five great options to try.

This is one of Joburg’s most exciting restaurants. Right in the centre of this huge space is a raised wood-fired parilla (grill) so you can see your food flame-licked to perfection. There’s a bar in front and many people sit right there, up close, fascinated by the way the food is managed on the grill. The team is fanatical about sourcing everything, even liqueurs. Only the bread comes in, specially baked by an Argentinian woman. Many of the meat cuts are different to ours, so be guided by one of the charming staff. Try the colita (a rump tail), asado (short ribs), or pollo deshuesado (boneless half chicken). There are so many meats, all so juicily delicious, cooked with salt flakes and served with chimmicurri. The salads are unusual and satisfying, too, and the desserts masterful.

This is a good looker at any time of day or night, with the elegant pit-fire and kitchen in the middle of the space. It’s stunning in the evenings, though, with flames just below the view of the lights and Joburg sky, reflecting in the coppery gleam of the décor and plates, and lions roaring from the zoo below. Chef Dirk Gieselmann calls the food ‘artisan braai’; the open flames work their magic on Wagyu beef cuts, Mozambican prawns, boerewors, Karoo lamb chops with mint oil, pork belly and more, served with various sauces and butters, including a maddeningly delicious caper aioli and a remarkable rosemary jus.

Built into the wall at this tattoos-and-beards phenomenon is the custom-made wood fire. Everything goes on it – even the Hellfire ice cream with deep-fried cornbread. A sign near the bar boasts: “If John Morrissey and Ronnie Dio came to Melville, this is where they would have a drink.” Their backs would be to the open flames but they’d hear and smell the sizzlings. They’d probably ask what to order and someone would say, “Why not the pulled brisket po’ boy?”, which is smoked, then braised in milk stout before it gets onto the easy part of the fire to do its slow thing. The unforgettable HK burger comes with 300g flame-seared beef, sizzled bacon and house-made pickles and rocket stuck in the melted cheddar, all stuffed between the halves of a brioche-dough seeded bun. It’s all like that at Hell’s Kitchen – pretending to be simple, casual fare, but exceptionally well created and skilfully touched by flames.

This impressive-sounding grill’s fires will only be lit in May, by award-winning chef David Higgs, no less. The former head honcho at Five Hundred will be turning his hand from fine dining to the open-flame treatment he’s researched in New York and Melbourne. Yes, Marble will be for meat enthusiasts, but Higgs will also be subjecting fish, vegetables and breads to the coals. There will also be a butchery down below, so that guests can take home more of the very fine meats they’ve tried. The rooftop bar, which will feature South Africa’s greatest wines, looks clear out to Silkaatsnek Nature Reserve in the distance.

All the food at this kosher restaurant and a bar is open-flame fare. Families gather, attracted by the warm vibe and strong sizzle. The Open Flame is best known for its whole-roasted chicken wrapped in macon, and the lamb shoulder steeped in cider and herbs then cooked on the flames with beetroot. Beef ribs and pizzas lend themselves to the wood-fire treatment here, too.