Less is more and we especially love paying less for more. Here are ten spots in Pretoria where you can score on great sushi deals.

What started as a humble takeaway spot over two decades ago has grown to become a chain of four restaurants in Pretoria. Patrons of the Rietfontein branch can take advantage of the many specials on offer every day of the week. When it comes to sushi, though, you’ll want to be there on Wednesdays and Saturdays, when it’s on offer at half price.

Good times are a sure thing on Thursdays from 4pm to 6pm, when for R390 you can enjoy bottomless Gorgeous sparkling wine and a ‘Most Wanted’ sushi platter. The platters comprise 16 pieces of the restaurant’s top five sushi plates. The special is available for two people.

As their slogan states: “Everyone loves John Dory’s” and that’s especially true for sushi fans after a good deal. Every Wednesday, the outlets around the country offer half-price sushi. Or from 11am to 4pm on Mondays, Tuesdays, Thursdays and Fridays you can choose any three green plates off the sushi belt for just R99.

There’s something for everyone here, but if it’s sushi you’re in the mood for, make your way to the restaurant on a Tuesday when all sushi is half price.

Although Portuguese cuisine is its specialty, you’ll want to give O’Galito’s sushi offering a go, especially between 2pm and 5pm every day, when all sushi is half price. 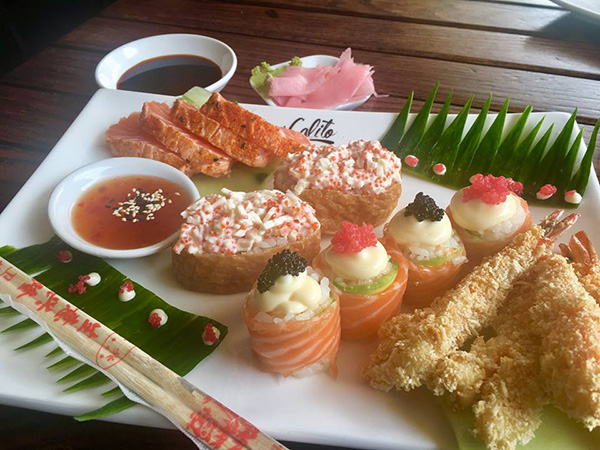 The owners of Oyama Sushi have put a lot of effort into providing customers with an authentic Japanese dining experience. Every Tuesday, Thursday and Saturday you get 10% off all sushi platters.

Offering a peaceful space to take refuge during a shopping storm at the buzzing Menlyn Park shopping centre, Parrot’s has a varied menu with great prices. On Mondays and Tuesdays, sushi has to be the order of the day, since it’s on offer at half price.

A post shared by Parrots Restaurants (@parrotsrestaurantssouthafrica) on Jul 10, 2018 at 4:02am PDT

Besides good service and delicious food, this welcoming Asian restaurant also runs unmissable specials. These include a sushi buffet for R163 per person, available every day. On Mondays, Tuesdays, Wednesdays and Sundays you can buy a portion of sushi and get another one for just R7 more.

Fresh, authentic Asian cuisine at affordable prices is what Wing Wah is known for. When it comes to sushi, the restaurants have some great deals. You can buy your favourite sushi and get another one of the same for just R5 more, or get a 20% discount on platters. Both specials are available every day.

A favourite among sushi lovers, Wong Fong has various deals running on different days during the week. On Tuesdays, get 30% of all platters; on Wednesdays you can choose any three portions for R100; and on Saturdays you can go to town on the restaurant’s sushi eat-as-much-as-you-like buffet for R159.

Have we missed your go-to sushi deal in Pretoria? Let us know in the comments below.