A pinch of salted caramel 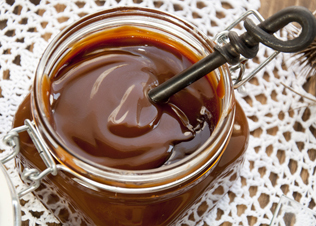 Salt is serious and savoury; caramel is sweet and flirty. So why do these two very different personalities play together so perfectly? Linda Scarborough finds that glossy caramel is brought a little closer to earth – or is it heaven? – by pairing it with a pinch of salt.

Salt is of the earth. It’s essential to human life, it’s what we cry and sweat; and it’s one of the basic human tastes. There’s nothing more grounded than salt.

But there’s salt, and then there’s salt. What stood on your childhood dinner table was probably a white, plastic tube with a spout, but that doesn’t cut it these days, I’m afraid. Once you’ve tried pink quartz-like crystals or fancy flakes from a bowl, you can never go back to using acrid granules in a shaker with grains of yellowing rice to stop it sticking together.

Used as a preservative for meat, fish and other foods, salt has been a traded commodity for thousands of years. Consequently, it became the source of battles and uprisings, most recently in the 1930 Indian independence movement, when Mahatma Gandhi urged hundreds of thousands of citizens to ‘steal’ salt from the sea to avoid paying salt tax to their British colonisers.

So why and how does this serious contender manage to make friends with caramel, all sweetness and light?

Science tells us that the sodium and chloride ions in salt enter the receptor cells on the tongue and result in increased nerve firing, which is why a pinch can rescue even the blandest dish. It is this quality that makes salt the perfect saviour from overly sweet caramel. Sugar, butter and cream make caramel a fun, frisky confection that’s designed to lift the spirits and blood sugar levels, while salt brings it all back to earth. The pairing makes sense precisely because the two are opposites.

As Meg Pascoe, owner of The Counter, who first introduced the Eat Out team to the joys of salted caramel (in a jar) in 2011, explains, “Caramel is quite rich and sweet, and the salt tones it down. It’s just magic!”

Kate Schrire, owner of artisan ice cream producer The Creamery, has a more measured approach: “It’s a natural fit. Firstly, many of our ice cream heroes do a sea salt and caramel flavour, so there’s a history of it as a pairing.”

One of these heroes is The Berthillon brand in France, which is famed for its sea salt caramel ice cream; and The Creamery’s own recipe is inspired by that of another of their influencers, Bi-rite Creamery from the US.

“The second reason is that caramel is a very cloying thing, especially if you’re eating it in a whole scoop of ice cream. Salt works by taking the edge off and making the caramel taste less sweet, bringing out the darker smokiness.”

While cream and butter affect the texture of traditional caramel recipes, says Kate, the real flavour come from how high you take [boil] your sugar. “We take ours to just before it starts to burn, giving it that slightly smoky, grown-up edge, and more depth of flavour.”

In fact, Kate believes that just as we salt savoury food, so should we season sweet dishes. The Creamery adds a dash of sea salt to all their custards to make the flavours a little sharper. “It’s only half a teaspoon per two litres, but that light seasoning makes all the difference.”

A salt for all seasons

Salt can also liven up a mouthful of wine. The co-owner of Top 10 restaurant Overture, Craig Cormack, won acclaim in 2010 for being the first chef to devise dedicated salt and wine pairings. He says that salt dominates the grape, which makes wine textures richer and sometimes smoother.

Perhaps selecting your salt is as important as choosing wine with dinner. Varying in texture, colour and flavour, salt can be harvested from the sea, sedimentary rock, pans or volcanoes, or it can be made industrially, according to Craig. You can season with red clay salts from Hawaii, blue crystals from northern Iran, pure white South African Khoisan salt, volcanic black salt from Pakistan and mild pink salt flakes from the Himalayas.

Following Craig’s trend, restaurants have started to feature flavoured salts in their dishes. The Pot Luck Club serves steamed edamame with miso and toasted garlic salt, and baby potato wedges with smoked paprika salt; Babel serves a baked chocolate fondant with olive salt; and the sushi chef at Nobu prepares abalone using half a kilo of this condiment.

It was only a matter of time before salted caramel moved from mere dessert to the star of the main meal, as demonstrated by Brad Ball, the chef at Bistro Sixteen82, who served sticky pork belly with tiger prawns, salted sesame caramel, and a hot and sour salad in summer 2012. That December, renowned Aussie chef Bill Granger published a recipe for belly of pork with caramel sauce that calls for sea salt, chilli flakes, star anise and cinnamon.

Hot and sour, sweet and salty, all in one dish? This must be the magic of cooking: fearless experimentation and rule-breaking to find flavours – like sea salt and caramel – that harmonise with one other to create a whole new layered taste. So next time you’re offered strawberries and black pepper, oranges and salt, or butter and mint, don’t ask why, just answer yes.