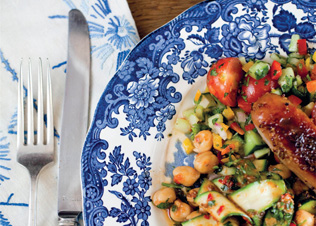 A Cape Town deli boasts recipes fit for a first lady – and for the rest of us. Popular daytime eatery The Kitchen pioneered the gastronomic revolution in Cape Town’s Woodstock, which has experienced a number of restaurants opening in the neighbourhood in the past few years.

The shop front for Karen Dudley’s catering business, which devises dinners and cocktail parties, has a bric-a-brac feel in keeping with this inner-city suburb’s numerous junk shops and second-hand stores strung along Sir Lowry Road. The Kitchen’s grid wall of wooden shelves and a glass display counter are crammed with old crockery, ornaments, vases and baubles. Yet, if you offer to buy any of these tchotchkes, you will be flatly turned down.

As one enters, there is a cardboard lamppost flaunting the newspaper headline “An Obama in my kitchen” from when United States first lady Michelle Obama popped in for lunch in June last year. Popping in, of course, involved cordoning off Woodstock’s main arterial road and included a convoy of 18 vehicles as well as an entourage of secret servicemen. Perhaps Obama chose this infinitely casual establishment because it is geographically on the class periphery and because it is a successful woman-owned business.

The Kitchen also shares her slow-food ideas, such as her vegetable garden and Let’s Move campaign, which aims to tackle the ever-fatter children in the US. Organic, local and healthy are central to Dudley’s culinary philosophy. The Kitchen is more deli than restaurant — you order and pay at the counter and sit on barstools in the window or on wooden benches. There are no backrests; comfort comes with the food and the conviviality of the place.

Novel approach
Dudley has now taken the courageous step of bringing out her own cookbook, having grown a passionate clientele, especially among the creative classes of Cape Town (you will find recipes for AfricaBurn salad, hippie tabbouleh and the love sandwich). Her gamble has paid off; A Week in The Kitchen has been resoundingly well received. Its success lies in the fruitful combination of Dudley’s cuisine, clean design by Roxanne Spears of Good Design and Russel Wasserfall’s many stunning full-page photographs, which give the impression of not being posed.

The approach is also novel. Instead of the usual division into starters, mains and desserts, the volume is based on a week in the Kitchen and runs from Monday to Sunday, skipping Saturday when the business is closed. Each day ends with sweets, such as almond tarts (Wednesday), sour-cream ginger cake (Thursday) and sesame yoghurt cardamom cake on the weekend.

Dudley and her staff create about 20 salads and sandwich variations every day. Having eaten there numerous times over the past few years, I can vouch for its consistently high quality.

Much of it is raw food and the favoured means of cooking is to blast-roast vegetables for 25 minutes or to blanche them for two to five minutes before immediately shocking the greens with cold water.

If you are curious to know what Obama sampled, it was a good representation of what The Kitchen has to offer. All the recipes appear in the book: Koshieri rice pilaf of Egyptian origin spiced with cinnamon and nutmeg; aubergine ratatouille with red wine; sumac slaw (white cabbage with ground sumac, a tart Middle Eastern spice); beetroot, apple and coriander salad with equal quantities of Granny Smith apples and grated boiled beets; chopped Turkish salad consisting primarily of finely diced bell peppers, red onion, cucumber and cherry tomatoes; and rocket barley walnut salad with olives, tomatoes, celery and cucumber — an enduring hit with the clientele.

In going to The Kitchen, the first lady chose well.

A Week in The Kitchen by Karen Dudley is published by Jacana Books.

Try one of Karen’s recipes for yourself with this sesame yoghurt cardamom cake.