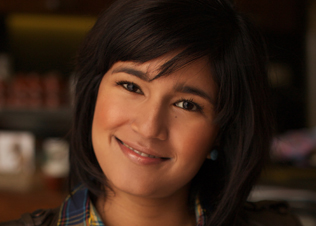 “Not enough, I have to admit!” is Kamini Pather’s wry answer to how much sleep she’s had. Phonecalls, interviews and social media messages have been pouring in for the winner since the finale of MasterChef SA season 2 screened last night. And the 30-year-old food blogger is handling it all the way she knows best: by herself. “I think social media is personal. I like to do it myself,” says Kamini.

Once the episode ended, the MasterChef stars went straight into a press conference, after which she caught up with fellow contestants. “I hadn’t seen the top sixteen in months, so we were just mingling and chatting. It was only much much later that I got back to my room and there were thousands of messages on FB and Twitter and phonecalls on my phone. I felt very loved.”

Love and support are often accompanied by the opposite reactions in the online environment, however – especially when fans are so passionate about their favourites. But Kamini was prepared. “Right at the beginning, when we first got to the house, they gave us a press briefing on how to handle yourself with the media. It’s up to every person how much of yourself you want to share. So I have been ready for the attention; even if I didn’t win, I was ready.”

On keeping her win under wraps, Kamini says it was important that family and friends – and the rest of the country – got to enjoy the show too. And that meant keeping mum. “It was the greatest secret ever… obviously. But we all promised not to tell.” Everyone on the show kept that promise and the secret was safe, making for fiery engagement and excitement on the social media side as each elimination unfolded.

But even though she knew the outcome, watching the shows on screen was still thrilling, says Kamini. “Every single episode took me back to the kitchen. I felt all those moments. It’s funny, because I would be sitting on couch with friends, watching the show, and my heart would be racing!”

If you want to catch the MasterChef winner in person, make your way to the Good Food & Wine Show in Johannesburg from 21-24 September.

“One of the appearances will be in front of 300 people, which is incredibly daunting,” Kamini admitted. She will also do a demo in a smaller venue, where she’ll get to show people techniques and interact with them more, which she’s looking forward to.

“I think when you’re on the stage, people forget you’re human. When you engage with them, they realise you’re a person.”

This engagement with the public is the means to Kamini’s two end-goals: to educate South Africans about seasonality and local ingredients; and to get people back in the kitchen.

“Food has been a freeing thing for me, and I want people to experience that.”

As for the long-term, Kamini has a product in mind, but nothing is set in stone yet. “I hope to support that with a website or something, where people can share recipes and food ideas. And maybe ultimately link to a TV show of some kind.”

In the meantime, check in on kamini.co.za or follow her on Twitter @kaminipather. Check out the Good Food and Wine Show website for more details on the theatres and demos.

To see a run-down of the past season’s episodes of MasterChef SA, visit our dedicated page.