In a changed world, what does sustainability mean to a chef?

In an industry where you’re giving countless hours, blood, sweat and tears, it seems incomprehensible for everything to come to an abrupt halt. Yet for so many South African chefs this was the reality when lockdown level 5 was announced, and they had no choice but to put down their knives and turn off their gas, with no idea when diners could return. This unplanned interruption meant chefs could suddenly cook only for themselves, or in some cases, for those in need. It meant they had to radically rethink what they do.

Michael Cooke, head chef of Camphors at Vergelegen, closed the restaurant within three days of President Cyril Ramaphosa’s lockdown announcement. Camphors uses seasonal produce from the farm’s own vegetable garden. What happened to these ingredients, fresh and ripe for the picking, when there was no one to eat them? Fortunately, the team at Vergelegen had a plan.

“We used the lockdown period to tidy the farm,” says Michael. “Our herb garden got ripped up and completely redone, and we built two huge tunnels on the property where we’ve had to plant new fruit, veggies and herbs to sustain the size of the new menu. 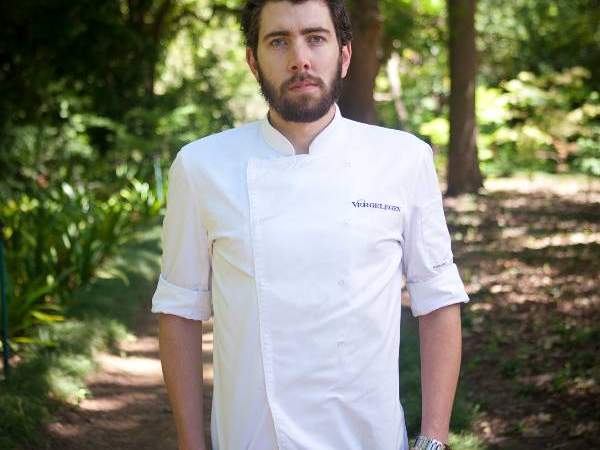 “Vergelegen had been building an arboretum, so a lot of trees were being planted and a lot of maintenance work had been taking place. We had chefs and waiters working in the gardens, uprooting those areas. And then we started cooking for local charities seven days a week using stuff we had available.”
The lockdown period gave the Camphors team time to get the produce up to growth point, so they could start using it when the restaurant reopened, says Michael. “It’s been challenging because with more variety on the menu, we utilise more product.

“We’re very cautious in choosing which ingredients to put on the menu because a lot of the produce takes a long time to grow. We didn’t want to have a situation where you deplete the product within a week and then have to wait four months before you can get it back again. The menu is still highly seasonal – it’s based on what’s available to us in the tunnels at any given time”.

Although Michael and his team have always run a sustainably conscious operation (Camphors is a two-time winner of the Eat Out Sustainability Award), the pandemic brought a new perspective to how they cook and source ingredients. “Being sustainably minded is more involved now and I think people are starting to see that. I’ve embraced sustainability and cooking from a different angle. We’ve always looked at ingredients holistically, from the root to the flower, but I think something that’s factored in a lot now is the sustainability of a chef and of the industry itself.

“As a restaurant, we’re looking at how we can change the way we work and how to ensure our staff are taken care of. Maintaining a balance between work and home life is something we should’ve been thinking about long before the pandemic.”

As restaurants steadily adjust to a new world, the flawed systems of the past will have to change as well.
“I think food waste is something that restaurants are going to have to think about quite considerably,” says Michael. “In the hard lockdown, the general public got to see how slim the margins in the restaurant industry actually are and how much we have to fight just to break even at the end of every month.

“Restaurant owners have had to look internally at all their systems, asking: Is it necessary? Is it viable? Is it worth having? And one of those things is going to be food waste – because when they see how much food is wasted, they’ll realise it’s money down the drain that could instead go back into the business.”

Diners are also adapting to a new financial reality. “A lot of people don’t have a disposable income anymore, and many don’t even have an income at all, so I think the customer base is going to be looking for something different and more affordable. That’s why we decided to look at an à la carte option, so that you aren’t forced into a fixed six- or eight-course tasting menu. We’re also thinking about the locals and their current situations. People just want real food.”

Will there still be a place for refined dining? Yes, says Michael, but pretentious, lengthy storytelling tasting menus may have had their day. “Honesty and more transparency are going to start playing a big role. People want to know what they’re getting and what they’re paying for.”

COVID-19 is reshaping the restaurant industry – hopefully for the better. It’s an opportunity to explore different revenue streams, look at fair pay, and to champion diversity and inclusivity. Although it may have come as a punch to the gut, the industry can ensure its own survival by being equitable, sustainable and a force for positive change.