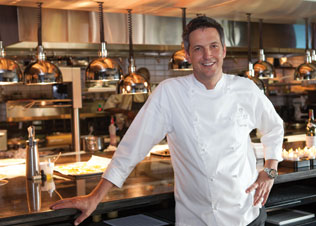 Over the past two years, 2010 Eat Out Chef of the Year David Higgs has been shaking up the Johannesburg food scene. Currently the executive chef of the luxurious Saxon hotel and the mastermind behind every exquisite meal at Five Hundred, David is enjoying the challenging environment, educated travellers and good weather in Jozi.

Coming from the peaceful surrounds of Rust en Vrede, we were surprised to find David in his element in the City of Gold. In his tiny, glass-walled office, he shares his newfound passion for city dwelling while keeping a close eye on the bustling kitchen.

“The thing I love about Joburg is that it never lets up,” he tells us. As if making his point, a line of white-clad staffers come scuttling past the office.

“We’re in July going on August and it’s no different from November and December. It’s really cool in the sense that you can really keep a rhythm going all the time and the staff stays motivated.”

Of course, the constant pace also makes for a tiring work environment, but this only seems to fuel his passion.

“There’s no letting up, but that’s exciting. Johannesburg is a working city, not a tourist destination or a holiday city. Over and above that I love the weather. I was in Cape Town last week and I don’t miss the wind and rain at all,” he jokes.

Five Hundred, David’s fine dining restaurant, is accessible only by private entrance and only to ten dining parties per night. Judging by the constant flow of customers, it’s a dining experience that Johannesburgers were hungry for. Far from the lack of fine dining enthusiasts or good quality produce that naysayers warned him about, David’s challenges include stricter dietary requirements and finding a balance between familiar meals and new dining trends.

“We’re using different cuts of meat from what the average Johannesburger is used to. The plating style and the combinations are a little different,” he says.

While trying to provide a unique and exclusive dining experience, David is careful about not being too way-out and not to push too many boundaries. While serving recognisable dishes, he tries to include a wow-factor on every plate. Chefs may be tempted to push boundaries, but David believes that his strength lies in presenting classic and basic meals in a contemporary way.

He says Johannesburgers are a lot more aware of their dietary requirements and not shy to specify food preferences or allergies. He serves at least two or three vegetarians a night and enjoys the challenge of vegetarian cooking, which is why both Five Hundred and Qunu take great care in preparing vegetarian dishes. He was also surprised by Johannesburg’s large Jewish community and what that means for his menu.

“We had to feel the market out, but from the day that we opened we hit the nail on the head. We haven’t had to change our menu. The only thing I’ve had to be careful of is shellfish and pork. When I opened, without even realising it, I tended to add a bit of parma ham here or a crayfish tail, pork belly or pork cheek there. That was one of the big adaptations, but it’s a relatively easy one to make.”

In addition to locals with a taste for the finer things in life, David is pleasantly surprised by the caliber of traveller that visits Johannesburg and eats at his restaurant.

“In contrast to Cape Town tourism, the traveller that visits Gauteng travels often, is in town for only a few days at a time, eats at the best restaurants in the world often and has a really good understanding of the nature of fine dining. They ask the right questions when it comes to food. They want to know about local produce and dishes,” he says.

Order a six-course tasting menu for R1550 (with wine), which changes daily, or a four-course set menu with choices for R1100 (with wine). Groups of eight or less can be accommodated.

Although the supply of fresh fish is a challenge due to the sustainable fishing movement, he regularly serves farmed sea bass, trout and kabeljou. While his refusal to serve kingklip is irksome to hotel guests who are used to having their pick of fish, he believes that the sparse supply of fresh fish is a challenge across the country. Luckily, fish is his only supply problem.

“It’s almost easier to find beef here. I also get a steady supply of lamb, springbok and other game whenever I need it. In Johannesburg you can get anything you want. You might have to pay for it, but you can get it!”

Five Hundred serves vegetables from the hotel’s certified organic garden. When David took over at The Saxon, the garden consisted of a single aubergine and a bay leaf tree. With a little TLC and the support of his team, the garden soon turned into a source of inspiration.

“The most fantastic thing for me is that the garden really changed the thought process of creating a menu at Five Hundred. Instead of sitting around a table and trying to figure out what protein we can get and planning a menu around that, we get to walk around the garden and say, ‘We’ve got this really beautiful purple cauliflower. What can we do with it?’ It’s almost a bit of an organic process – pardon the pun,” he laughs. “It’s been very rewarding for me.”

It seems like his garden is not the only thing that put down roots in Johannesburg. David Higgs is here to stay.

Have you been to Five Hundred? Tell us about your experience by writing a review.