How to eat fish in Zanzibar

First, I must apologise for the extended hiatus. Starting a new job, renovating your kitchen and planning a wedding are apparently not things you should aim to do within the same three-month period. Not if you want to eat out and live to write about it. 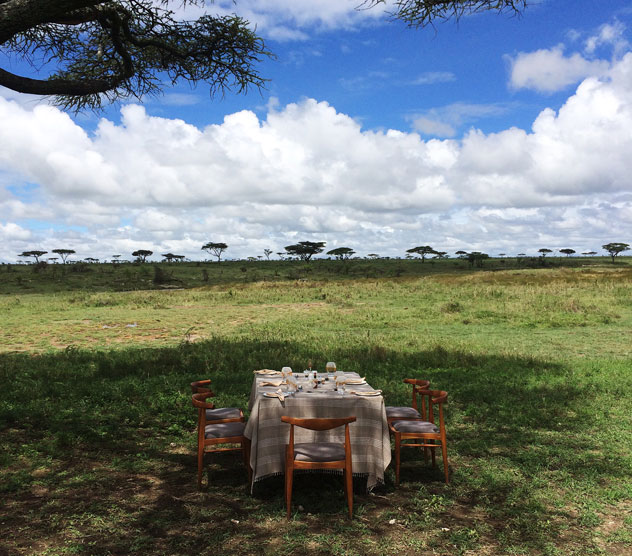 Towards the end of last year, the most eating out I did was probably on our honeymoon in the Serengeti, where the closest you get to a restaurant meal is under an Acacia with a view of the wildebees herds. Amazing location, but the food was nothing special. At least not for the humans.

It wasn’t as bad as the food in Zanzibar, though. That was substantially worse. 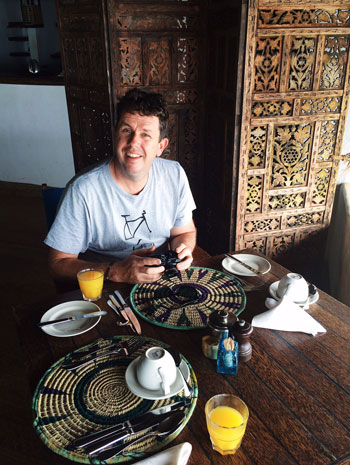 The Salad Dodger in Zanzibar.

We spent three days in a resort on the East Coast before taking three sweaty light planes into the bush. We lucked out and reserved an amazing suite that had two private-terraces with 180-degree views of the coast – photo heaven for fans of the iPhone panorama.

Every afternoon we’d watch the dhows threading their way through water so perfectly blue it was silly. We’d imagine them carrying their precious haul to a market somewhere, hoping that a sparklingly fresh catch of the day was destined for our dinner. But this was always followed by the crushing disappointment of being served a piece of fish so horribly overcooked and oversauced that after first making it through a gelatinous layer of goo the flesh stuck in your teeth like badly hung biltong.

In the mornings when the tide was out, our terrace framed the equally picturesque sight of local women wading in the patchwork shallows in front of the reef, collecting live octopus and crabs in their skirts – ingredients which never made it to the dinner table at all. And when we went out on a boat ourselves, to join the masses spotting dolphins off five-star Mnemba Island (where, I suspect, the food may be better), it turned out those shallows were carpeted with thousands of urchins – an endless feast of roe just a few feet and a gazillion poisonous spikes away.

But instead of just-picked urchins served straight out of the shell with lemon and Tabasco (as they should be), what we ate was a lot of shark. Or that’s what I ate anyway. This was one of those occasions when my husband, the Salad Dodger, wore his seafood allergy like a smug badge of honour. The fish all had different names, none of which I had ever come across – and still haven’t, despite extensive Googling – so I’m sticking with shark. It certainly stuck with me. 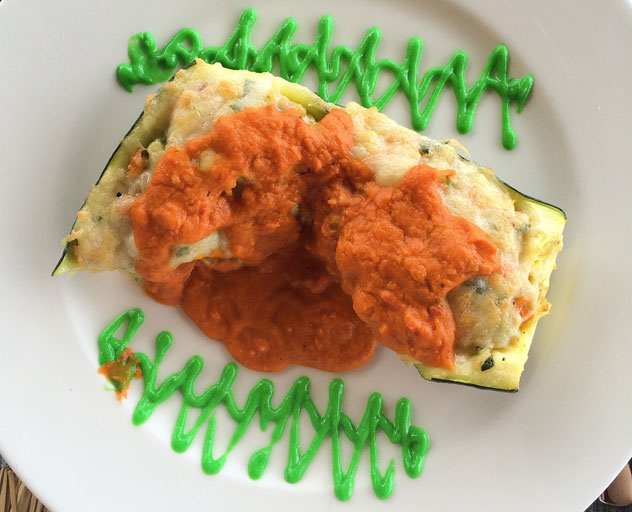 When I ran out of dental floss after three days, I ordered a vegetarian main course out of desperation. The menu described it as “stuffed marrow”, which sounded harmless enough, but I challenge you to look at that plate (see picture) and not experience a distinct wave of food dread. It’s a thing. 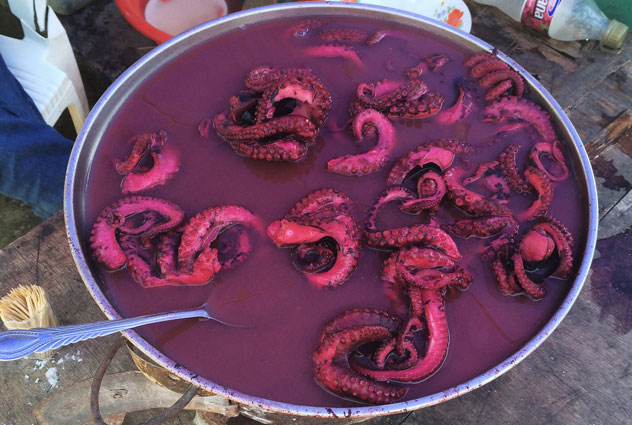 It turned out that Zanzibaris have a thing for food colouring. I had noticed them selling it in powdered form at the spice market in Stone Town, amid bags of more palatable cloves, peppercorns and nutmeg. Then there was also the matter of the man selling hot octopus soup under an umbrella. It was unmistakeably purple – like a lurid bruise. The Salad Dodger shrank in horror. And he is 6 foot 4. 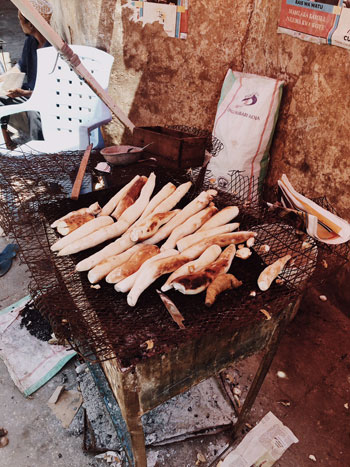 Plantains cooking on an open fire.

Of course none of this is strange at all – it’s just culture. Yes, I couldn’t manage the fish market for longer than a few iPhone frames (and usually I am very good in fish markets), but I also have it on good authority that the outdoor seafood braai that happens near the market in the evenings is worth the associated intestinal risks. We arrived too late to partake and ate at our hotel, but if you like your fish fresh, unsauced and lightly grilled, then this is where to have it.

Incidentally, I took it upon myself to fill in the comments section on the guest ratings form at the beach resort. I recommended they consider serving urchins. I like to be helpful. You’ll thank me one day.