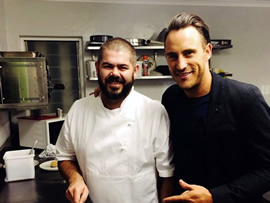 Ever since SA cricketer Faf du Plessis debuted for the Proteas ODI side in 2011, he’s been a favourite with the fans and the selectors. He’s just ended his season with the Chennai Super Kings in the Indian Premier League, with the team finishing as runners up in the final of the Twenty20 tournament on Sunday 24 May 2015.

But cricket is not Faf’s only interest – he’s quite the foodie too, and even has shares in a Stellenbosch restaurant. We tracked him down to find out where and what he likes to eat.

I love spicy dishes. My favourite Indian cities for food are Mumbai and Bangalore. As a team [Chennai Super Kings] we eat a lot of Indian cuisine and curries, so I don’t eat much of it when I’m in other countries or at home.

I don’t have a favourite restaurant as I’m always trying new things. I’m very new to Cape Town, so I’m just enjoying that phase where I’m exploring all the amazing restaurants. I have invested in a restaurant called Bistro 13 on Welmoed Wine Farm in Stellenbosch, with chef Nic van Wyk. It’s an amazing little place and he cooks amazing food.

To be honest, when I’m back home ¬– because I spend only about three months a year in my own house – my wife, Imari, and I cook quite a bit. She is very into her healthy cooking, so I try to make things that she can eat as well.

My perfect pizza toppings would be something like chicken, avo, goat’s cheese, chilli, mushrooms and tomato. My wife recently introduced me to cauliflower pizza, which is nice, but not the real thing!

Most of the time this meal is in a hotel, so it would be something like Greek yogurt with honey, fruit, oats and then some scrambled eggs with bacon.

Post-match food is always at the ground, so sometimes it’s good and sometimes it’s average. It’s pretty much just a refuel straight after the day’s play.

I try to have a balanced diet, but I’m quite fortunate in that I can eat pretty much what I want. (Though my wife secretly tries to get me into all of her super foods from Wellness Warehouse.)

We’re allowed to eat anything, but there are regular fat percentage tests with individual targets. So it’s each player’s responsibility to make sure he keeps an eye on what he eats. I do like a chocolate sometimes, though…

I love burgers and there are some great spots in Cape Town, like Hudson’s and Royale. I really enjoy something with a bit of chilli sauce.

The first thing I learned to cook was pasta, as it was pretty straightforward, but I’ve learned so much more about making it over the years. I don’t cook pasta so much any more – as I said, my wife doesn’t do carbs.